Taking Your Campaign To A New Scale 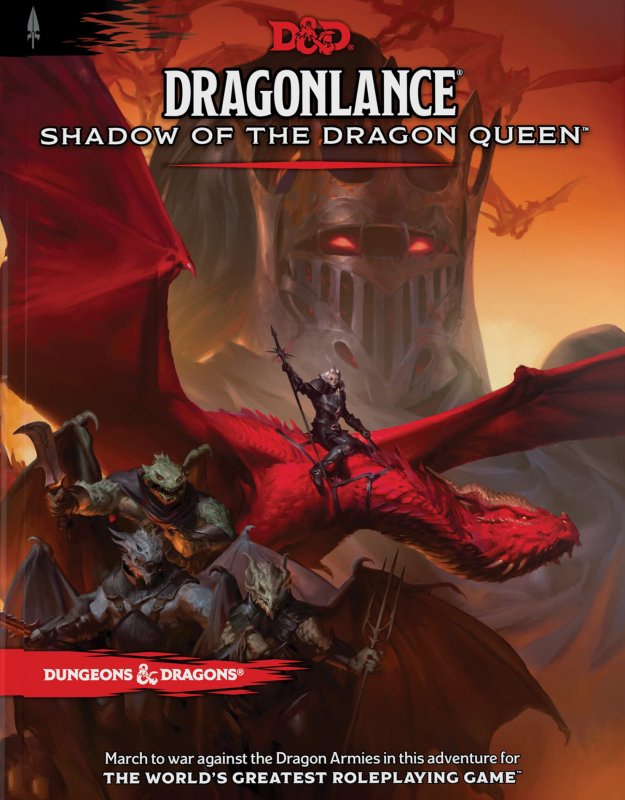 Dungeons & Dragons closes out a busy year with their most ambitious adventure in years—Dragonlance: Shadow of the Dragon Queen, a return to the beloved campaign setting.

In 2022, the world’s premier tabletop RPG has focused its official releases on bringing established campaign settings into the Fifth Edition, from Critical Role’s Exandria to the long-absent space opera antics of Spelljammer, with a quick stop to establish one intriguing and new playground, the Radiant Citadel. Similarly, Dragonlance: Shadow of the Dragon Queen introduces the world of Krynn, drawn from the titular novels by Tracy Hickman and Margaret Weis.

With no personal investment in the world of Dragonlance, but knowing others who adore the novels, I had a piqued interest in Shadow of the Dragon Queen. The team at Wizards of the Coast absolutely delivered upon those expectations.

If you’ve picked up any other Fifth Edition adventure, you’ll be able to orient yourself quickly: the book begins with a prologue full of background information on Krynn, a chapter of character creation options, and then dives into the meat of the adventure. The background gazetteer info is one of the finest primers in this edition to date—concise and specialized with information on details like gods and currency, but not veering into excess. It will prove a succinct initiation before the campaign, and a handy reference for DMs mid-session.

Dragonlance‘s background info continues into the character creation chapter, delving into the species-specific details upon which players can build their adventurers, including the new Hobbit-like Kender. My personal favourite part of the chapter are the new backgrounds which immerse players in the orders and conflict of Krynn.

The Knight of Solamnia and Mage of High Sorcery backgrounds impart bonus feats to prepare them for Shadow of the Dragon Queen‘s large-scale warfare. Martial or magical characters should strongly consider throwing their lot in with their respective group, per the book’s guidelines on their values and morals. For instance, if you’re playing a paladin, you could take the new Knight of Solamnia background to gain the Squire of Solamnia feat at level 1 for some unique buffs, and complement that at level 4 with the feat Knight of the Rose, signifying your alignment with the god Paladine’s order and gaining even more benefits, mechanical and story-wise.

Not only could this approach be re-skinned and re-appropriated outside of Dragonlance, it provides an interesting method of aligning a character’s background with the setting. They provide tools for the specific setting, and offer even more prompts to develop the character within that setting. These will surely be popular tools if Wizards of the Coast continues building out Krynn as we enter the One D&D era in 2024.

Further in, Shadow of the Dragon Queen‘s second chapter is a bridge into the campaign for Dungeon Masters, providing a big-picture overview, hooks to introduce characters, and mercifully, a page-long pronunciation guide for Dragonlance-specific names. The approach offered, involving crossing paths at the funeral of a mutual acquaintance, was the kind of thing I kicked myself for not thinking of first. Like Spelljammer, these hooks would make a great complement for a prelude session or the second part of a Session Zero.

In other Dungeons & Dragons reviews recently, I’ve mentioned a personal bugbear of mine with premade adventures: lack of a big-picture summary or formatting that helps demonstrate the flow of events through the published material. Dragonlance attempts to assauge that with chapter summaries and an “adventure flowchart.” It’s a start, but the overall formatting of Fifth Edition still screams for more overt graphical representations—like literal flowcharts mapping all of the encounters printed in each chapter. Again, I acknowledge this could just be dissonance between the way I map out my own homebrewed material and the official format, but regardless, it’s nice to see a touch more organization.

From there it’s into the adventure proper, a six-chapter saga that takes players from level 1 to 11 through literal battlefields and full-scale warfare. Players will be caught up in the conflict as Takhisis the Dragon Queen’s agents move upon the region of Solamnia, early in the War of the Lance.

I’m sure Dragonlance veterans might have issues resolving the events of the adventure with the lore of the books in some way, but as an outsider, this was one of the most interesting Dungeons & Dragons adventures so far in Fifth Edition. Its events—as written, sans interventions for characters’ decisions—are the type of scenarios many new players might envision when guessing what a typical game of D&D might look like: showdowns with epic foes, fighting at the fore of armies like The Lord of the Rings, dueling wicked nemeses like Lord Soth, the infamous Death Knight pulled from the source material.

I love exploring the Underdark or sojourning to different cosmic realms as much as the next guy, but Shadow of the Dragon Queen hit some notes I didn’t realize I was eager for. It’s high fantasy at its finest, and a capstone to an excellent year for the game overall. It’s also a demanding title, despite being on the smaller side of premade adventures; DMs might not want to use this as initiation for new players, and should definitely digest the entire tome before beginning.

Wizards of the Coast knew fans would be eager to return to Dragonlance, and used the opportunity to offer the game’s first physical and digital bundles. Consequently, there are an unprecedented number of ways to purchase Shadow of the Dragon Queen: the standard physical edition, the D&D Beyond content, the alternate-art cover of the book available from independent game stores, the Deluxe Edition with a third cover and a copy of the board game Warriors of Krynn, and a digital deluxe bundle that includes it all.

Dragonlance‘s Deluxe Edition is the biggest D&D offering since the deluxe reprinting of Curse of Strahd two years ago—fitting for its densest adventure since, and its most terrifying villain, even if Lord Soth’s stat block doesn’t need to be printed on a poster like Strahd’s. Better yet, it enables groups to use Warriors of Krynn to really play out the scenes of warfare.

Is the board game required? Absolutely not. Sidebars describe how and when to utilize the board game’s campaign into your RPG campaign, or how to resolve things without it; beating the supplementary mission might impart rewards on the RPG side, but losing (or not participating) has no penalties. Generous DMs could even find ways to issue the board game rewards to players without it entirely. The Dragonlance experience is heightened by switching gears to a game within the game, but it’s dense in its own right, so don’t feel obligated to incorporate it.

Granted, while this array of purchase options offers consumers choices, I do start to worry about the motivations behind them in light of recent comments from Hasbro executives about D&D and Magic: The Gathering being undermonetized. That’s a discussion for another day, however; for now, melding the physical and digital content is an option I’ve been begging for since Beyond came around, and I’m glad to see it brought into effect.

Ultimately, Dragonlance: Shadow of the Dragon Queen could very well stand as the precipice of Fifth Edition’s premade adventures, alongside the likes of Curse of Strahd. A varied and epic story seasoned with memorable scenarios and showdowns with the forces of evil, both personal and large-scale, should earn this campaign a spot in the edition’s hall of fame.

Returning to a beloved setting, Dragonlance: Shadow of the Dragon Queen is a dense yet well-presented adventure, giving players to live out their Hollywood high fantasy dreams.
REVIEW SCORE
10
Buy On Amazon
File Under: D&D, Dungeons & Dragons