Strixhaven: A Curriculum of Chaos Review

Class Is In Session 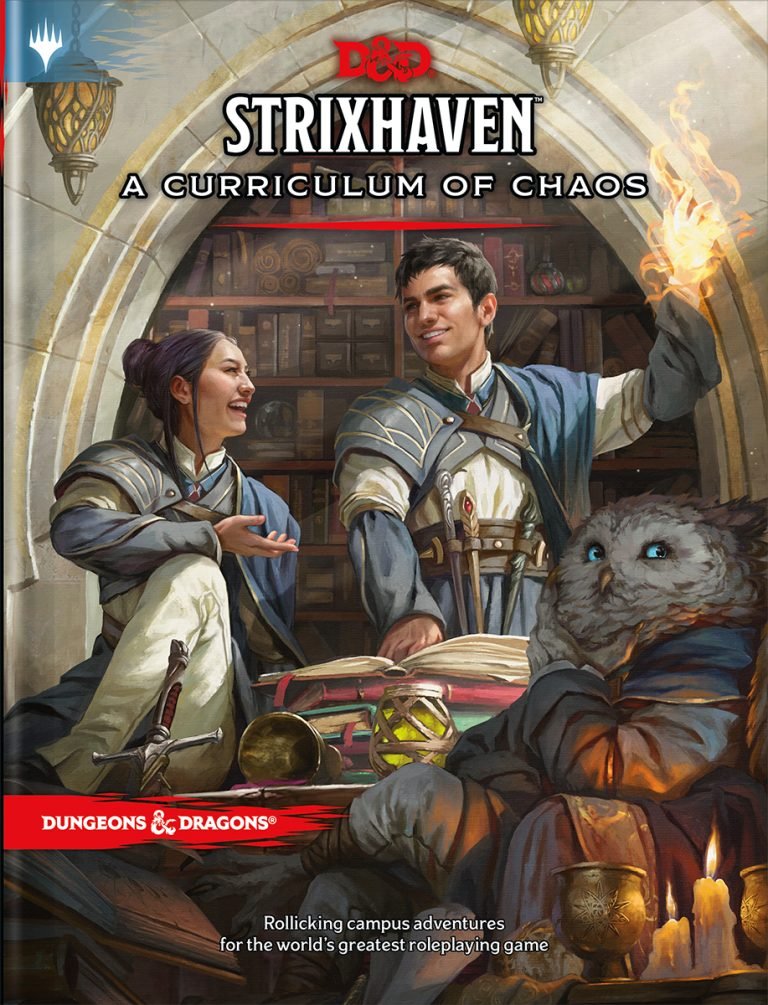 Having several friends who are big fans of a certain franchise set in a magic school, and as a Magic: The Gathering player, I was really excited for the prospects of Strixhaven: A Curriculum of Chaos, a new sourcebook for Dungeons & Dragons Fifth Edition. That franchise’s magic laws felt flimsy to me even before there was extra baggage put on the license. And what better way to give your magical characters some context than to send them to magical school?

The result fell short of my high hopes but is still a thought-provoking tome for DMs.

Strixhaven: A Curriculum of Chaos contains two brief chapters of context and options for players, with the rest constituting a series of adventures DMs can use as single outings, or stitch together into a small campaign. As the latest in a series of crossovers with Wizards of the Coast’s other titan, Magic: The Gathering, the information within is heavily coded for games set at the titular academy.

The first chapter is the traditional lore dump. If you played the card set, you may be familiar with the multiverse’s biggest magic school and the five distinct colleges which make up its student body. Otherwise, all the background info you need on this interesting setting is here. Players will want to thumb through this chapter and make sure they’re picking the right college to associate with.

In its second chapter, Strixhaven introduces a new race, the flying, stealthy owlin. The real meat, however, are the backgrounds. Each college has a background, and players that take one automatically gain a corresponding version of the feat Strixhaven Initiate. For instance, my character chose the Lorehold Student background—clearly the best college—and thus gained the feat Strixhaven Initiate (Lorehold), adding certain spells to their lists in keeping with Lorehold’s specialties.

“Strixhaven: A Curriculum of Chaos contains two brief chapters of context and options for players, with the rest constituting a series of adventures DMs can use as single outings, or stitch together into a small campaign.”

It’s similar to how the Guildmaster’s Guide to Ravnica handled the ten guilds of that plane, relegating all the Magic: The Gathering flavour to your character’s background. Unlike the previous book, however, granting a feat automatically is a little more practical, and each can add a dash of magical flavour to any character.

That being said, I can’t help feeling a little underwhelmed by this arrangement. Full-fledged subclass options might have conveyed the power of a Strixhaven student in a more compelling way. However, Wizards of the Coast released playtest material that offered these colleges as subclasses that could be chosen by different classes—”Mage of Lorehold”, for instance, was available to either bards, warlocks, and wizards—and the general consensus was overwhelmingly negative, so I’m not surprised to see them relegated to backgrounds and feats.

There are also five new spells and a smattering of magic items to round out the chapter—a spell per college to represent their specialty, a textbook for each college to aid in spellcasting, and some minor trinkets you’d find in your own postsecondary school’s gift shop. Not much that’s universally applicable here, but enough to round out the setting. (I need that “Bottle of Boundless Coffee” in real life, though.)

“Unlike the previous book, however, granting a feat automatically is a little more practical…”

The remainder of the book is four adventures on the campus, meant to be played as standalones or as a campaign that takes your party through their school years and to level 8. While some of this info is coded specifically for Strixhaven, you can also use it as a template for a magic school of your own creation. There are also universal rules for taking exams and for forming relationships with NPCs.

The Relationship system can either be a way of making interactions with recurring NPCs more interesting—for instance, if you’re friendly or hostile to the nice Silverquill first-year, they may treat you accordingly when you cross paths again weeks or years later—or could be used to go the extra mile with romances. There’s a gallery of pre-generated fellow students to help implement a little character into these interactions. If you’re the kind of DM who keeps track of every NPC, this system could enrich your game considerably.

“The remainder of the book is four adventures on the campus, meant to be played as standalones or as a campaign that takes your party through their school years and to level 8.”

The adventures themselves are interesting and varied, taking the party to almost every corner of the school during their academic careers. Various representatives of each college, from first-year students up to the deans and the dragons who founded them, can be found in the appendix of monster stat blocks. And unlike the previous sourcebook, Fizban’s Treasury of Dragons, I found the ratio of new to recycled card art much more even.

I fell in love with the setting of Strixhaven immediately upon its reveal earlier this year, and if you also enjoyed the set’s flavour, you’ll find a lot to enjoy here, especially if you already incorporate the other Magic: The Gathering content into your campaigns. I only wish I could have done more in this regard—for instance, to make a Ravnican Paladin of Boros who planeswalks to Strixhaven and learns magic.

What if you’re not invested in the other Wizards of the Coast game though? I think there’s considerable value in this book as a guide to creating a magic academy setting, if you’re committed to chopping and screwing specific features. The rules for academic social life are pretty universal, but you’ll want to tweak these backgrounds’ flavour if you’re using them outside the setting.

Strixhaven: A Curriculum of Chaos is highly focused on its source material, and could have gone a little further in presenting its class options. However it’s also a great inspiration for creating “magic school” campaigns, if you scribble over the location-specific details.
REVIEW SCORE
7
Buy On Amazon
File Under: Tabletop, Wizards of the Coast