The One Ring TTRPG Review

A No Brainer for Fans of The Lord of the Rings 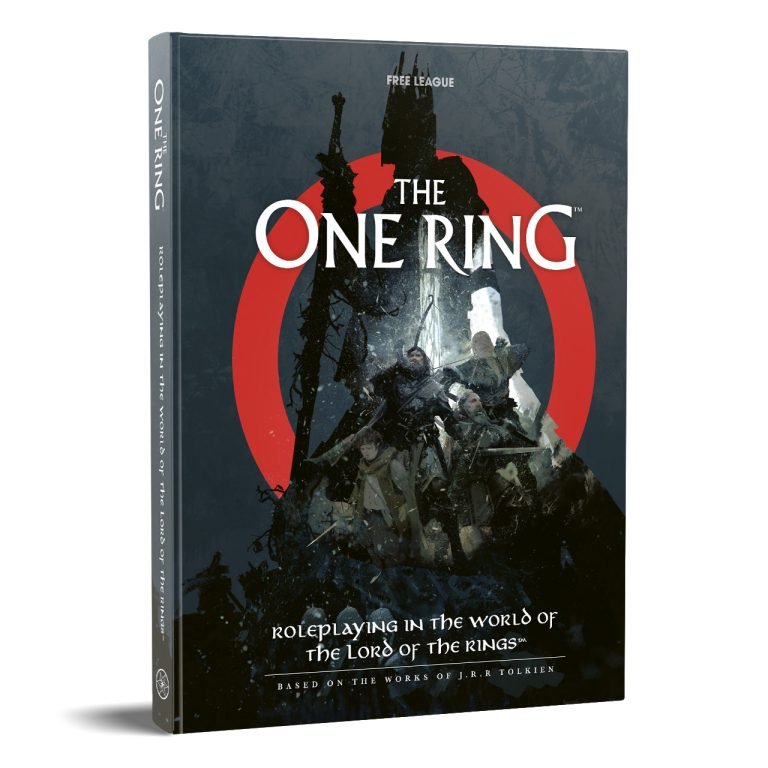 Middle-Earth is calling in The One Ring: Section Edition and the One Ring Starter Set. This second edition of the award-winning RPG system was first published in 2011 and, after a successful Kickstarter campaign, is now once again available. If you have even the slightest interest in Lord of the Rings and like RPG’s this is a great buy.

On a cold, snowy night in Toronto, I called my friends to gather around and take up the role of hobbits for a Lord of the Rings-filled evening. Smaug has been defeated, the Battle of Five Armies has been won, and Bilbo Baggins has returned to the Shire. Now new Hobbits must come out of their holes and save the day and, of course, make it home in time for supper.

The systems core rules, a book titled The One Ring: Roleplaying in the World of the Lord of the Rings, is a fresh take on Middle Earth. It focuses on Hobbits and is set during the twilight of the Third Age. That means it is after the events of The Hobbit but before the adventures of the Fellowship of the Ring. The problems you will face are not on the same epic scale as The Lord of the Rings but are problems all the same. Middle Earth will not be split apart, but it still needs your help. This game is made for fans of the series who want relatable down-to-earth stories that don’t undermine the original series’ cannon and lore.

You won’t fight any armies or war here, but there are still some epic fights. Instead, you will be faced with issues such as sneaking through Farmer Maggot’s stable and making sure you get home in time for a second supper. You see relatable stuff. Hobbit’s and I share much in common, especially our love of food.

The set is enclosed with beautiful maps, including the ink-on-parchment style of the original novels and a field of colourful hexes, much like old-school Dungeons & Dragons world maps. I’m tempted to frame mine. These highly detailed maps showcase Hobbiton and Weathertop as The One Ring is set firmly in Eriador, west of the Misty Mountains.

The cultures included are people from the Shire, Lindon and (ew) Bree. Despite its name, there is no mention of the one ring in the game outside of being alluded to in a pre-generated Bilbo Baggins character sheet.

The game’s scope might sound small, but there’s plenty to do. Lead writer Francesco Nepitello has thought through every aspect of this game and has an incredible eye for detail that long-time fans of the series will love. How you play is really up to you, and there are plenty of chances to end up doing something epic, albeit on a small scale.

The One Ring: Start Set, the system’s introductory boxed set, contains three books to help ease you into the game. It’s best to start with The Adventures and The Shire. These have premade scenarios for you to explore. You’ll quickly learn that Eriador is a rural landscape of interconnected friends and family, local heroes and legends and is a very secluded community. There are no kings, dragons or wizards here.

When Tolkien created these stories, he also created moral geography. This means that the north and west parts of Middle Earth are considered ‘good” (The Shire is located in the northwest) while the south and east are evil (Mordor is in the southeast). Eriador being in the west means you’re not going to stumble on too much danger, but there’s still plenty of darkness lurking in the shadows.

The Adventure book is a series of five scenarios starring fan favourite Bilbo Baggins as the non-player character instructing the players on what to do. It’s best to start with some of his small quests to help ease you into the game’s rules.

“Each adventure we played through in The One Ring was memorable and, often times, funny. “

The game system is quick, unique, and easy to pick up. It’s based on a pass or fall d12-based dice-rolling mechanic. A character’s statistics and skills help determine success via additional d6 dice rolls. Each player knows the target number they will need to hit to pass a given skill check, so you don’t need a game master (or, in this game’s case, a lore master) to judge what happens. This helps speed up The One Ring’s pace and allows the lore master to steer the action and control the story. 12 is an automatic success, while 1 is a failure. The Starter Set comes with the dice you need to jump right into the action.

The One Ring has two structures: an Adventuring Phase and a Fellowship phase. In the Adventure Page, characters will trick, fight and run through various scenarios in their path, while the Fellowship Phase gives the player time to rest. In rest mode, you can assess the progress so far on their character sheets and prepare for the next adventure. You can also raise an heir, which allows you to bring in a new character. While resting, you can also change your character skills.

Those going into The One Ring expecting the grand scale of The Lord of the Rings will be sorely disappointed, but for those looking for a laid-back hobbit sized adventure, you’re going to love what’s presented here. It’s enjoyable to be limited in what you can and cannot do. Think of it more like The Hobbit than anything else. It’s a great game to play over several beers and surrounded by close friends.

Fans of the series will also recognize several characters who can join your party as non-playable characters. These characters can include Gandalf, Bilbo, and my favourite, Tom Bombadil.

Each adventure we played through in The One Ring was memorable and, often times, funny. It doesn’t take itself too serious and definitely feels campy at times. It’s almost reminiscent of the much-forgotten animated The Lord of the Rings movie from the late seventies.

Honestly, this might be one of my favourite role-playing games I’ve ever played. I’m a sucker for anything Lord of the Rings, and because of how intimate and silly the game can get. It’s a lot of fun and is helping kill time until Amazon’s Lord of the Rings show is out later this year. Happy adventuring, my fellow Hobbits.
REVIEW SCORE
9.5
Buy On Amazon
File Under: Lord of the Rings, One Ring, ttrpg