A Remarkable Tale of Piltover and Zaun 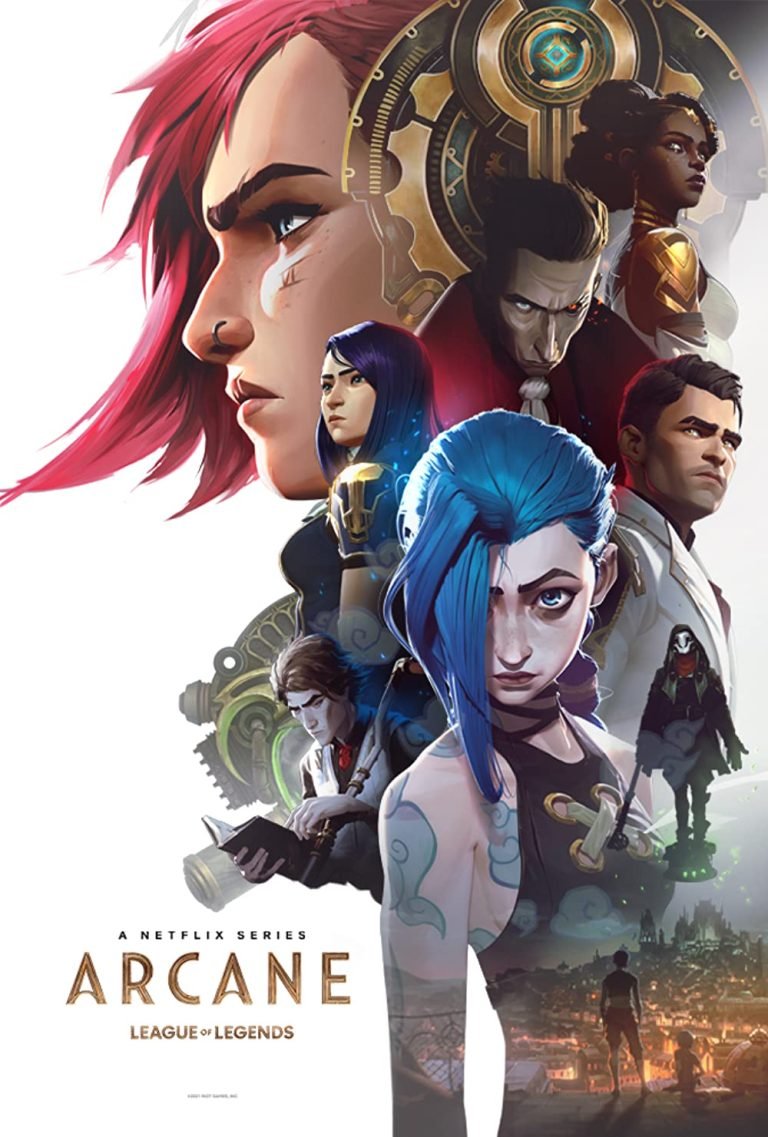 The fan base of Riot Games’ popular multiplayer online battle arena (MOBA) video game, League of Legends, along with myself, were all weary of what a TV series could bring to Netflix. I was concerned this would either face a lot of backlash for being a poorly executed show for fans of the game, or it would become too niche for game’s players. In my opinion, Riot Games and Netflix did not display a great, spectacular show; it gave audiences a masterpiece and trendsetter for a TV series adaptation with Arcane.

Initially, I loved that they went with a focus on the sibling champions from the game with similar names, Vi and Jinx. I knew from their lore that one of them is a criminal and one of them works in law enforcement, so it was compelling to see how the creators of the series would build up this divide between the sisters. After seeing two out of the three acts, I enjoyed the format of having three episode acts because I think it provides a sweet spot of giving a pseudo-cinematic experience with each part.

I love the addition of other characters from the game as well: inventors Jayce and Viktor, aspiring detective Caitlyn, time traveller Ekko, and Professor Heimerdinger. Most importantly, it is the setting of Piltover and Zaun that these people from various backgrounds can thrive in connecting their stories to me.

The first Act begins with a bright, action-packed opening. As young Vi, Powder and their rag tag, Goonies-like team attempt to steal valuables from a noble’s science lab, seeing the world of Piltover was magnificent. The artwork of the steampunk city and its blimps mixed with the scenes of the kids parkouring through European rooftops and clay brick streets was thrilling and stunning.

“Riot Games and Netflix did not display a great, spectacular show; it gave audiences a masterpiece and trendsetter for a TV series adaptation with Arcane.”

Then, the gloomy underground, slum city of Zaun (specifically, The Lanes) offsets the radiant city of Piltover well because it immediately introduces the warring class conflict between the two cities co-existing with one another. I must point out that the storytelling and pacing is something that rarely finds fault in Act 1. Each episode is paired with a fight, some world-building and suspense—leaving me craving the next episode.

Arcane’s Act 1 does a great job establishing its characters, both from the previous canon in League of Legends and the new ones. In fact, I felt an instant connection to the father-figure for Vi and Powder, Vander. I am curious if we will ever know more about him before he adopted Vi and Powder, because we only get hints of his past as the leader of a violent revolt through the conversations he has with acquaintances like the store owner, Benzo, and his former partner, Silco.

Speaking of Silco, what a scummy, slimy dude! From the moment they introduced this man, I knew he was going to be some kind of crime boss breed between Batman’s Penguin and Grima Wormtongue from Lord of the Rings: The Two Towers. It is just the way he speaks to people and how he influences them to do his bidding—you can feel his venomous words.

“Arcane’s Act 1 does a great job establishing its characters, both from the previous canon in League of Legends and the new ones.”

This is interesting because he develops in the second Act to be more like Batman’s Joker, who uses his new wealth of being the crime boss of The Lanes to gain power in both Zaun and Piltover. I found it a strange choice that Silco suddenly becomes the weird, new fatherly figure for Jinx (formerly Powder) since Vi casts her out at the end of Act 1. Their interactions get a little too close to Jinx calling Silco “Daddy”, but not in the familial way (yikes!).

Scrubbing that image out of my mind, the climax of Act 1 spoke volumes to me. It showed me the TV creators were not afraid to make this a more mature show because of all the gruesome deaths that ramp up in the latter half of the first Act. I would not say the show is trying to be a gore fest, but rather, it does not shy away from showing the brutality and impact of death to add more gravity to the tense situations. Arcane is definitely not as bloody as other mature animated shows like Netflix’s Castlevania or Prime Video’s Invincible.

It is not only the physical deaths that are more mature but the themes too—no, I am not talking about the sex scene and some spicy language in Act 2. One of the saddest mature issues this show indirectly deals with is suicide and trauma. When Jayce is caught with the unstable arcane crystals (later coined as Hextech crystals by Jayce and Viktor) and is forcibly not allowed to practice science at his academy any longer, he plans to walk off the ledge of his destroyed laboratory.

The younger demographic audience may not fully understand what he was about to do, but I understood that feeling too well, and it made a lot of realistic sense—when you are told you cannot do what you have spent your whole life passionate about and studying.

“I would not say the show is trying to be a gore fest, but rather, it does not shy away from showing the brutality and impact of death to add more gravity to the tense situations.”

As for trauma, we see Powder/Jinx struggle with this one a lot. While her sister vents their childhood trauma through bare-knuckle fighting people, Powder tries to build gadgets to help Vi. However, when everything she does spells ruin (a ‘jinx’) for her family and friends, Vi leaves and transforms her trauma into an abandonment complex. When she becomes Jinx in Act 2, we see how the voices in her head are of all her dead friends, which help her make decisions—rarely good ones.

I respected seeing the adult, fleshed-out themes laid on to Jayce, Jinx and even into some other supporting cast, like Marcus, who tries to be a straight-and-narrow Enforcer but inevitably ends up on Silco’s payroll in Act 2. I really hope to see how these different personalities, with their past baggage and scars, find some conclusion in Act 3 (the final act). And I better see more Poros because Heimerdinger’s one is so cute!

Act 2 jumps a couple of years later after the events of Act 1 and becomes a lot more political, in terms of its focus on Jayce becoming a part of the council—the way Anakin Skywalker did in Star Wars: Revenge of the Sith. I was amazed to see how Hextech was used to create hyper speed travel from Piltover to other parts of the world—it works much like “recalling to base” in the video game. I would say the only interesting thing to see was the teasing of Vi’s future gauntlets and Viktor’s laser beam he uses in the video game.

“Act 2 jumps a couple of years later after the events of Act 1 and becomes a lot more political, in terms of its focus on Jayce becoming a part of the council …”

Other than seeing Jinx becoming more like Jinx from League of Legends, I thought it was an awesome act to see Caitlyn’s backstory develop since she was kind of overshadowed in Act 1. Caitlyn and Vi’s team-up is perfect as it builds the Bad Boys or Lethal Weapon buddy-cop dynamic.

I could not have asked for a better show to express my love of the game. I hope Arcane’s Third Act finishes with a bigger bang, and we get to see all the League of Legends champions with their iconic looks and weapons. There are still surprises in store, even for those familiar with the game’s lore. For example, the identity of the mysterious leader of the Firelights gang.

Personally, I think it is Ekko, who was one of the few in-game champions who failed to make a re-appearance in Act 2. Seeing Ekko fight in the show would be an incredible treat as he is known to have his blade and time-travel abilities to use. I’m not sure if he will have these abilities for the show, however.

I also hope we get to see if Vi and Jinx can make up in the way their fatherly figures, Vander and Silco, could not. As for the relationship between Jayce and Viktor, it truly defines the tension between the twin cities: upper-class versus lower-class, Jayce thrives in politics while Viktor’s health deteriorates with his obsession with magic, and Piltover is advancing as Zaun crumbles away.

I hope all these relationships can be repaired by Act 3, but I feel like there must be a catalyst that pushes them apart if it is following closer to the established lore. On the other hand, Arcane is in unknown waters and the show has the power to change and build on a new canon.

These first two acts show me that the creators know exactly what heartstrings to pull, and they are not just milking the already established fan base; rather, they are trying to make a show that expands the lore of these characters from the game and inviting new fans to see that this world is worth giving it their attention. Arcane is going super strong right now, and I hope the final three episodes will be well worth the wait!

Arcane’s Act 1 kicks off with a bang. Act 2 continues to reload some emotional and story-driven ammunition. Then, I hope to see Act 3 conclude the show with a barrage of mouth-watering explosions, pandemonium and tear-jerking moments it has already provided to many of us.
REVIEW SCORE
9.5
File Under: Arcane, League of Legends, Netflix, Riot Games