Hot Comics to Buy This Week: Great Jumping on Points

This week’s releases include a return of one of the best series of the past decade, a new book by the Tiny Titans team and a reimagined look at Green Lantern. 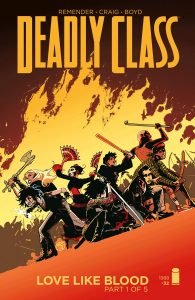 Deadly Class has been one of the best comics on store shelves, (Second best to God Country last year) and it’s finally back from its hiatus. The series is set in a high school for assassins and the first 31 issues have been chalk full of excitement, double crosses, relationship issues and good ole assassinations. Rick Remender and Wes Craig have combined seamlessly and with the comic currently being adapted for tv, this is the perfect time to jump in.

Issue #32 also marks the start of a new arc for the series and picks up at a three-way standoff between the Yakuza, Victor’s kill crew, and the new freshmen. If you’ve been reading Deadly Class since the beginning then you already know that this is an issue that you won’t want to miss. That being said, if you haven’t read any Deadly Class then I strongly suggest picking up the first collection as this is a series worth enjoying from the beginning. Also, this one’s no doubt full of spoilers. 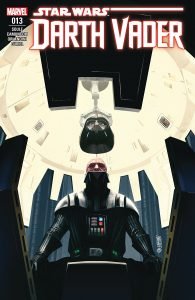 The Darth Vader comic has been on quite a run recently. Its previous arc featuring Jedi Master Jocasta Nu did a masterful job of bringing in known Star Wars characters and telling an emotionally charged and engaging story. Writer Charles Soule and artist Giuseppe Camuncoli have slowly but surely turned their Darth Vader run around, and are currently delivering on the initial promise that the series had.

Darth Vader #13 is the start of a new arc and the perfect jumping on point for new readers. It not only takes place on the woefully under-visited planet of Mon Cala, home of Rebellion leader Admiral Ackbar but also features Imperial leader Wilhuff Tarkin. The fact that this comic is now telling stories that actually feel like they have weight and impact on the Star Wars mythos is extremely exciting. The force is strong in this one 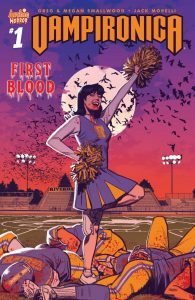 This is the second week in a row that a strange Archie comic has been featured on this list, and once again it definitely deserves its place. Vampironica #1 is an intriguing comic as it features everyone’s favourite/least favourite heiress Veronica Lodge being bitten by a centuries-old vampire and having to either control her newfound bloodlust or unleash it.

This issue is also intriguing because it’s written and drawn by Greg Smallwood. Smallwood is best known for his run on Moon Knight and his moody visual style should be a perfect fit for this vampirical series. Either way, this issue promises to be yet another installment of Archie madness. Now if the company can just release a new issue of Afterlife With Archie, all will be good. 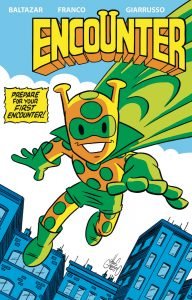 Tiny Titans is one of the best all-ages comics released in the last decade. The series transforms DC Comics icons into kids and has them dealing with elementary school issues, while also delivering top-notch references to DC Comics’ history. While there hasn’t been an issue of Tiny Titans for some time, Encounter #1 very much seems like a spiritual successor to the series.

Simply put, Encounter #1 sounds like more cute all- age action from the team of Art Balthazar and Franco. The series tells the story of Encounter, a shapeshifting alien who escapes his planet and decides to become a hero on earth. He also has a talking dog sidekick named Barko, which is really all you need to know about why you should check out this series. 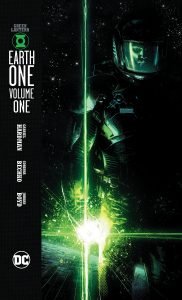 DC Comics’ Earth One line has been rather hit and miss so far. The imprint reimagines DC’s icons in a darker and more modern light, but many of the books featured have been missing a strong emotional core. Enter: Green Lantern Earth One Vol. 1. The graphic novel reimagines Green Lantern’s origin, as he is no longer an airplane pilot but instead an astronaut. This series also picks up with the Green Lantern Corps all but destroyed by the menace of the maniacal Manhunters, and it will be interesting to see how Hall Jordan fairs without the guidance of the Corps.

One thing that is for sure, is that this is going to be a very pretty book. The graphic novel is written and drawn by Gabriel Hardman, the storyboard artist on such films as The Dark Knight Rises and Inception. He has shown a knack for beautiful, rich visual storytelling and the graphic novel format is the perfect fit for his work.

What book are you most looking forward to this week? And is there a better named for a dog sidekick than Barko? Let us know in the comments below!

Liked this article and want to read more like it? Check out the Jeff Lemire Special and our list of the top 5 Graphic Novels Books to Read Today!