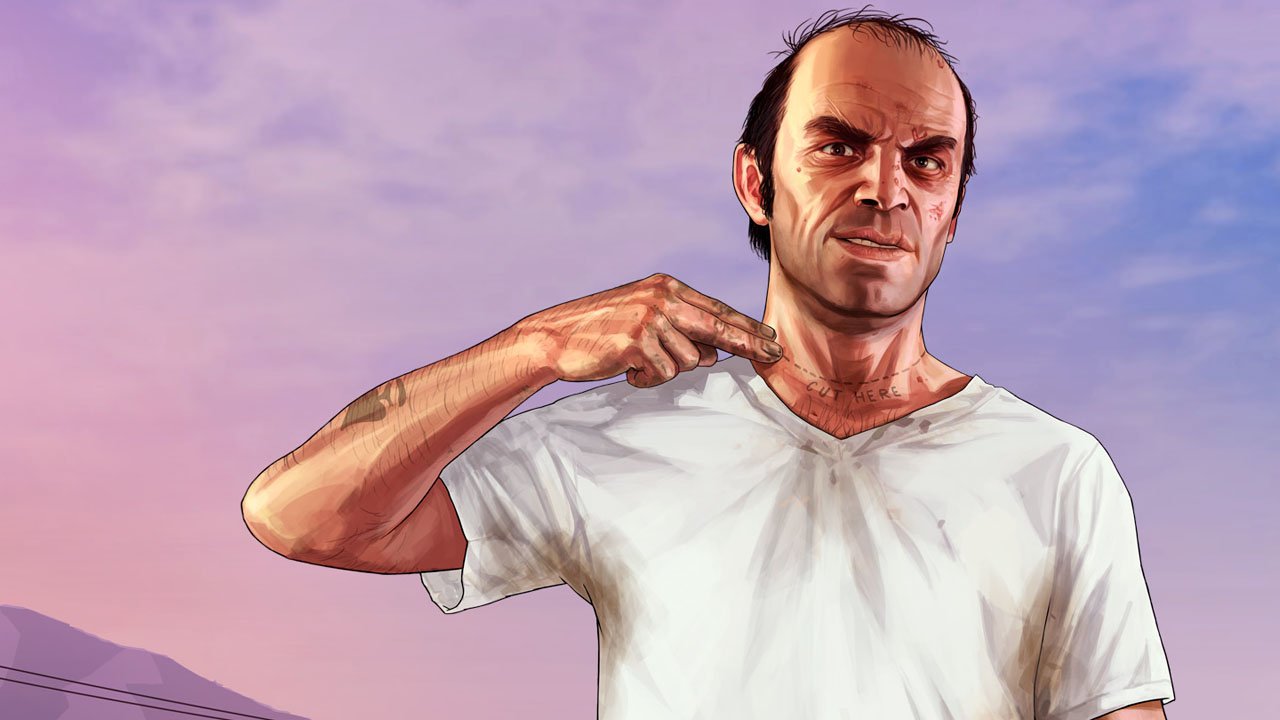 An Interview with Steven Ogg of GTA V

Steven Ogg is a Canadian actor born in Calgary and living in New York. While he’s done various roles over the years, he’s probably most famous for his portrayal as the maniacal meth-head Trevor from the blockbuster video game Grand Theft Auto V. There is something distinctly Canadian about Steven. He is humble, but determined. Grateful, but hungry. After taking a six-year hiatus to build a house in the woods, Steven is back in the game with roles in the Canadian period drama, Murdoch Mysteries, the upcoming HBO series Westworld, and the starring role in the sci-fi film Solace, set to begin shooting next year. .

CGMagazine: Was voice acting something you always wanted to do?

Steven Ogg: When I originally came to NYC I went through the time honoured tradition of the actor’s struggle, especially as a foreigner, making sure the papers were in order and all that. I was very fortunate that I did relatively well. Getting spots on shows like Third Watch and Law and Order was easier back when someone like myself could get guest star appearances. The business has changed now, it’s all big name actors that get those roles. I had been doing commercial voiceover work, which was a wonderful way to make some cash but it got to a point where I wasn’t really into it

CGM: And then you decided to go and build a house in the woods?

Steven Ogg: [laughs] Yes. I was always into design, had always been fascinated with architecture and I was looking for an opportunity to get out of the city. I grew up in Alberta, so I always wanted a house in the woods. It was a fantastic experience but after a while I realized I had to get back to acting, it was all I knew how to do; I didn’t want to just be a house builder. Grand Theft Auto V was my first major audition in ages and I thought it sounded cool because it wasn’t just voiceover work, I would be playing an “animated character.” I had no illusions of grandeur about jumping back in to the industry, the audition came along, just like any other. They didn’t even tell me what the actual game was. Some of the other guys had experience in the game world so they clued in pretty quickly.

CGM: Were you familiar with the series at all? Are you much of a gamer yourself?

Steven Ogg: I’m not a gamer at all. I had no idea what I was I getting into. Ned and Shawn were familiar with the series so they figured it out. I just assumed from the title it had something to do with cars.

When I learned more about Rockstar, I went back and tried to play Red Dead Redemption… but I couldn’t play it, just wasn’t for me.

CGM: Did you have idea just how colossal the game was going to be?

Steven Ogg: It doesn’t change anything for me. I always put the same effort into my work. But when you notice how big it is- a billion dollars over three days- you can’t grasp that, I can’t even wrap my ahead around numbers like that. Looking at a successful film for example, very few even come close to breaking the billion dollar mark over their entire theatrical run. That’s when you go holy crap, GTAV made that in three days. That was the only time I really saw the magnitude, it was unbelievable.

CGM: What was playing Trevor like, did you know what you were in for?

Steven Ogg: It was immediately different than anything I’ve done before. Part of the attraction was to have an animated version of myself. How cool is it to have a cartoon that is you? With voiceover work, it’s just you in a studio. GTA took way more imagination because there was no set, no costume. You’re in a big studio with a trailer built from duct tape and apple boxes, so it took a bit of imagination. With motion capture, it’s like a movie, except you’re wearing a jumpsuit with little balls glued to you and helmet with a camera pointing at your face. It’s a lot more fun and more of a challenge. Everything you see was me doing my thing.

CGM: It’s pretty safe to say that Trevor was the star of GTAV, how do you jump into playing a character like that?

Steven Ogg: Playing Trevor was a lot of fun. Like any role, after a bit you start to act like that character. I started to scratch myself more, skip showering for a couple days… you act differently. I’m attracted to that character because he is the Id of that world. He’s the exciting, crazy character. He’s unpredictable. I have to say though that a project like this is a team sport, it takes everyone involved, I was extremely lucky to work with such talented individuals. It was a great experience but it doesn’t change the way I drink my coffee. It’s wonderful and flattering but doesn’t change me. I’m very fortunate and very lucky to have had that opportunity.

CGM: Now you’ve moved on to Murdoch Mysteries, how are you enjoying that?

Steven Ogg: Well, I’m based in New York, but as it’s a Canadian show that means I get to visit home soon. I’m really excited to sit down and watch the show at home with the family. My son really helped me with the characters because he liked the show. Apparently it’s called The Artful Detective in the US. I wouldn’t watch it just because of that name. They don’t think Murdoch Mysteries works?

CGM: In the show you’re playing a guy named Bat Masterson, who, from what I’ve read, sounds like quite the badass. Is it hard to get into the mind of character like that?

Steven Ogg: The writing is wonderful and the character is so rich, from the way he enters a room to the things he says. If you trust the work, and you’ve done your homework, once you’re there and on set and have the guns on your side, the bowler hat on with the cane and coat, well, it’s true what they say: Put on the outfit and it transforms you. Everything about the production is wonderful, the sets, the costumes… it takes you right there.

CGM: Rumour has it you’ll be voicing Slappy the Dummy in the Goosebumps movie?

Steven Ogg: [laughs]I have no idea where the Slappy thing came from, as far as I know it’s a total rumour. My son has read all the books and when he heard they were making it a movie he thought I’d be perfect for it. This was years ago actually. I thought, “That would be great to do.” I heard Jack Black signed on, and remember discussing it. I would love to do it, and I told my agent about it but so far, nothing. Don’t believe everything you read on the internet kids!

CGM: Other than Murdoch Mysteries what’s up with you?

Steven Ogg: I just spent a lovely summer in LA shooting Westworld for HBO, which was an incredible experience. Don’t know where that’s going at this point, but working on a project with folks like Ed Harris and Anthony Hopkins was just incredible. Unfortunately I missed the wrap party, but everyone said it gave them chills. I’m really psyched to see where that goes and how it turns out.

Once again I consider myself very fortunate for an experience like this.

I’m also working on another job, a secret project, but I can’t say anything more about it. Especially these days when an entire run of True Detective gets leaked online, so I can’t say anything about it. I’m back in NYC for a couple weeks and there’s always a few things circulating. Another big project I’m working on is a sci-fi film called Solace which I’m really stoked about shooting next year. It’s basically just me in an escape pod hurtling towards the sun, but more like Moon than Gravity.

CGM: Sounds pretty cool, what attracted you to the role?

Steven Ogg: The thought scared the crap out of me, so that’s why I wanted to do it. There are certainly moments of self-doubt, and times when I’m not sure if I’m good enough. But that’s part of the excitement, the challenge, and if I can pull it off it will be an amazing film. All I can do is try to do the best job possible, in respect to all the other people working. We have folks from NASA working as consultants and we’ve reached out to Chris Hadfield. I was never really into space stuff but my son gave me his book and after reading it I’m a lot more interested. This role is so enticing for me because in a situation like that, the last thing you want to do is panic. In a movie like Sunshine, the characters are supposed to be highly trained scientists and astronauts, but when the alarm goes off everyone loses their shit. Apparently Hadfield didn’t like that, so I want to portray a certain realism…he’s heading towards inevitable death, what do you do as a professional in that situation? It needs some theatricality to it but I want to tread a fine line between making realistic but entertaining.

CGM: Lastly, what would be your dream project?

Steven Ogg: I like dark, depressing movies about the human struggle. I would love to head back to the west coast and shoot for six months in the woods, just surviving and making great work with a great team. I’m very blessed that Solace came up, and I’ve been talking about wanting to do something like this so I have to. My dream is to be kept busy and challenged, I’m so much better when kept busy than idle. I come from an athletic background, I love the challenge and I always wanted to play with people better than me. I think of it like the song Get Into the Ring by Guns and Roses. I want to get my ass kicked, it’s the only way to get better.