When I first played The Final Station earlier this year at PAX South, developer tinyBuild likened it to Faster Than Light. However, instead of managing a starship crew during a perilous journey, you’re a train conductor operating one of the last means of transportation during a zombie-like apocalypse. It’s not quite a rogue-like and it does employ fun and harrowing 2D exploration sections between stops. The beta included the first act, which hints at a surprisingly deep narrative and wider world.

The Final Station is a tinyBuild game, meaning it is quite literally a few hundred megabytes and uses a , but nice, pixelated art style. It also takes its apocalypse quite seriously: the world has been overrun by mutated people whose origins you will eventually discover. They appear as pitch-black humanoids and soon grow in number and variety as you make your way to different train stations along the route.

The action in The Final Station is divided between two different areas. The train travels by itself between destinations. During the journey you have to attend to any survivors you’ve picked up. Each one has a health and hunger bar that depletes fairly rapidly. You can craft medical kits and food using various scraps you find, but have to physically hand them over to each passenger.

Your train’s batteries also require constant attention, mostly in the form of you clicking certain buttons at regular intervals. It’s not especially compelling or intricate. Keeping survivors alive in The Final Station rewards you with additional money and supplies when you reach the final destination at the end of an act.

The train stops at regular destinations. During these excursions you’re a one-man survivalist in a funny hat. Your goal in each area is to find the code to get you to the next area. You’ll have to carefully open doors and scout around for enemies as well as looting ammo and supplies. Until you discover the shotgun toward the end of the first Act of The Final Station, you have to rely on your pistol and swift melee attack. 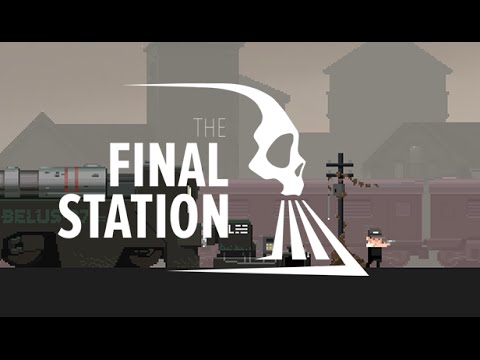 Headshots instantly take down zombies, but you soon begin facing armored zombies that require a melee strike to knock their helmet off, and faster runners who sprint toward you. I’d be interested to see how deep the enemy variety and weaponry gets, but so far the first act is a promising start.

The Final Station‘s combat is fast and brutal. You can’t take many hits and you’re almost always outnumbered. Death is not the end, however. Frequent checkpoints let you try again from a point right before nearly every engagement, which does cut down on the fear factor a bit. The moody music, grey tones, and constant dead bodies and destroyed world convey a serious tone. Though the controls and concepts are relatively simple, a quick tutorial would have been appreciated. As it was I kept losing passengers before I realized what I needed to do between stops to keep them alive.

Like many modern games the story and world are told through little vignettes and notes you find. You might read about some people holed up in the subway, and later find their corpses along with dozens of the shadow-zombie creatures. You could discover a small refuge of people, but only some will come with you while the rest decide to tough it out.

Your passengers will also discuss the world around them. It’s effective without having to rely on cutscenes. I was surprised to see the act-break offer a chance to mingle in a town, complete with shops and NPCs. I learned a bit more of The Final Station’s backstory of how the world ended and where the protagonist and his train fit in.

The train simulation aspect is bare bones and lackluster, but it does provide a decent change of pace from the much more engaging action-exploration parts. The levels get larger and more fun to explore, though there always seems be a single linear path. The relatively simple combat is kept fast and fun. There are even some survival-horror elements in how enemies will crash through doors to come at you, and the need to conserve ammo. It’s not nearly the infinitely re-playable rogue-like journey that Faster Than Light was, but for a game with a tinier scope The Final Station has a lot of heart.