Digibit Motion Controller For Smart Devices Has Been Fully Funded.

Digibit is the world’s first wearable gaming system for your mobile device. The manufacturers’ behind the device tout it as being a revolutionary system which allows the human body to become the game controller.

The device functions by measuring the linear acceleration of the user in 3D space. The data is transmitted in real time to compatible mobile games, translating kinetic movement into controller input. The algorithms that help the device function are 100 times faster than what a human being is capable of sensing, in other words — those worried about input latency and lag can rest easy, as the upcoming device should be able to handle all manners of motion with ease.

Inside the box, consumers will find two Digibit devices, a VR headset for your smart device, a charging cable and two velcro straps all in a sleek and compact white box.

Those familiar with Microsoft’s Kinect should feel right at home with the Digibit. Like the Kinect, the Digibit system aims to bring full body controls to the mobile games market. Thanks to the nature of mobile devices, all the device needs to operate is the user’s smartphone in addition to games that support the new peripheral.

Unlike most smart accessories that require the use of Bluetooth and or Wi-fi, the Digibit uses its own proprietary and patent pending system to connect. Simply put, the upcoming motion centric device will be a flexible system that can be used anywhere without the need of the internet.

In terms of available software, the upcoming device has several games ready to go for when it launches. some interesting titles include:

FunnyWings — Allows players to soar the skies, and feel like a bird in flight. 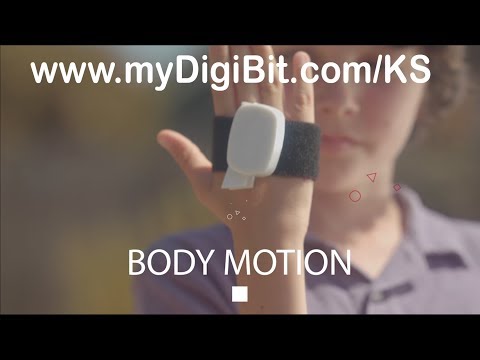 Currently, as of the writing of this post, The Kickstarter campaign for the upcoming device is still under way. The campaign as of right now has made an impressive $4,323 of $2,500 of its goal.