Final Fantasy XV has a new update that has hit two days before expected. Update 1.05 brings the promised PlayStation Pro support to the epic JRPG from Square Enix, that was originally scheduled for release in December. The new update offers players two visual modes to take advantage of.

The 1.05 update offers players two game modes to take advantage of. The new lite mode that unlocks the framerate allowing the game to theoretically run at 60 fps, and a high-resolution mode, that runs the game up to 30 fps, with a checkerboard 1800p resolution. 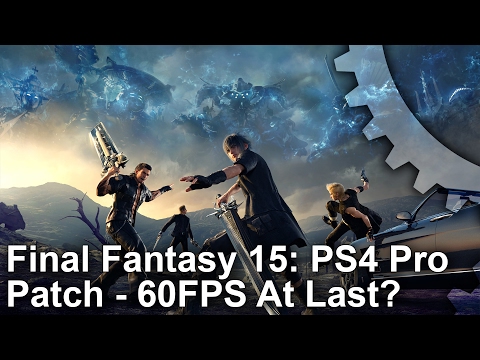 The good people over at Digital Foundry have sat down with the new update, and the results are not great. The PlayStation Pro version of Final Fantasy XV already had options for light and high-resolution modes before the update, what patch 1.05 did was removed the framerate lock in the light mode, making for an overall inconsistent experience. The high-resolution mode, on the other hand, offers a better resolution with significant framerate issues.

The press release for the update also lists the addition of two new songs from NieR: Automata to the in-game radio: “Inishie no Uta / Unmei” and “Weight of the World. There will also be a free update called “Booster Pack+” that will be launching at a later in February that is promising a “Boost Sword” weapon, “Dragon Mod” fishing rod among other additions.

Final Fantasy XV initally launched on November 29, 2016 to critical and commercial success. CGMagazine awarded Final Fantasy XV game of the year for 2016 along with giving it a score of 10/10.