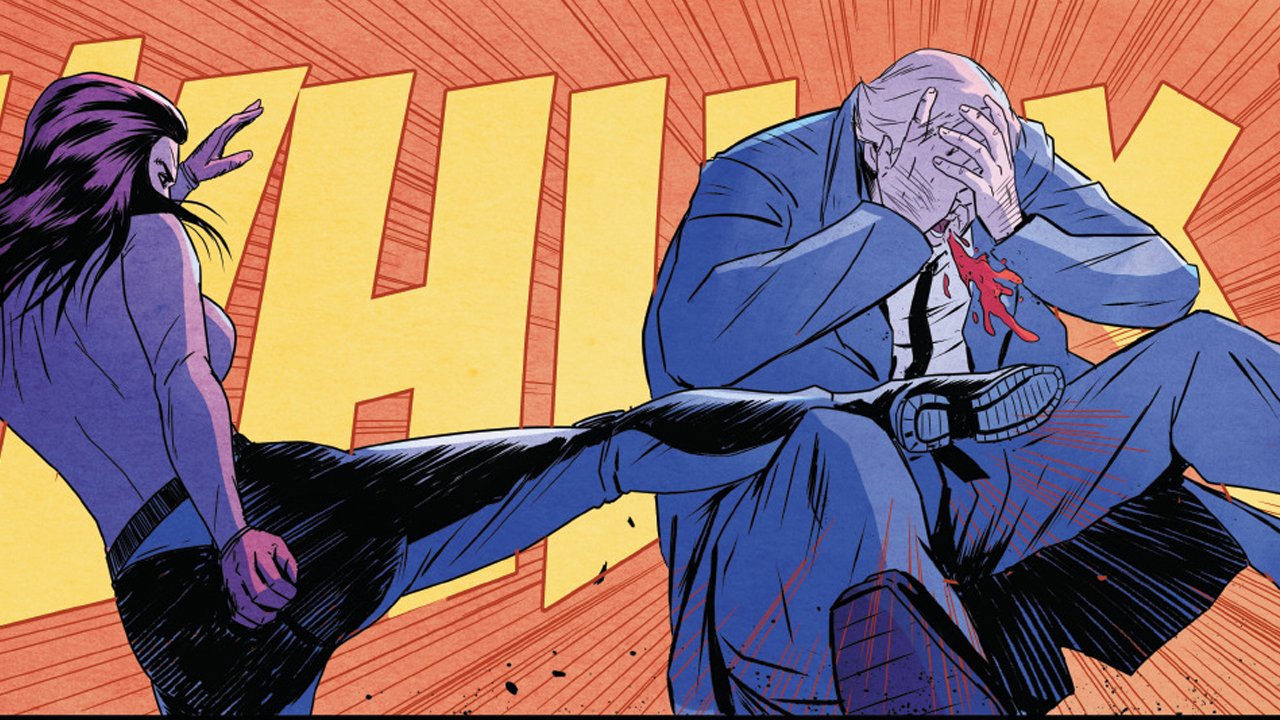 Set in the year 2226, Knight Guardians of Relativity presents a highly futuristic take on what we hope will one day be mankind’s greatest accomplishment — time travel. At this time, a tool we haven’t even been able to harness yet has already become humanity’s most destructive weapon. They call this The Relativity Machine. After four ‘Great Wars’, the UN decided to come together to appoint a group of the world’s finest to watch over the Relativity Machine and as the title suggests, these are the Knight Guardians of Relativity.

Knight Guardians is an adaptation of the sci-fi adventure novel The Last Time Machine written by Gareth R. Roberts. As part of the Toronto-based award-winning media content studio TITAN1STUDIOS, Roberts came together with writer Taran Chadha to imagine his story onto the panels of a comic strip illustrated by Abel Garcia, Irma Kniiviia, and Gabe Sapienza. Knight Guardians of Relativity marks the first in a long line of prequels, sequels, more novels, a TV series, a video game, and even a VR experience; all together to be known as the Relativity Universe.

Issues number one to three of Knight Guardians of Relativity show a lot of potential and excitement for issues to come. Although the main mission surrounds the Knight Guardians looking for the killer of their fallen comrade, Aaran Seth, it still manages to delve deep into the psyche, characters, settings, and predicaments of the Relativity Universe. The most iconic thing about this story is its ability to take the minor things we know and love from the world of sci-fi and twist them into something new and exciting. Halfway through the first issue, there are already tonnes of observations that show this could be an awesome read for any fan of sci-fi narratives.

The apocalyptic environment these characters live in manages to take aspects from every future-based story we’ve seen without seeming rehashed and redundant. The vibrant, constantly changing colours of the numerous settings are used to denote setting, time, and mood. Acts like this are very useful particularly since constant flashbacks and setting shifts are a huge part of the storyline and it could get convoluted if your mind easily drifts. With the six remaining city-states existing in this destructed world, you start to realize where you are once you catch onto the reddish tint of all panels set in Han Yen Shen or the purple filter on shots of Argentia. A personal favourite would be the city-state of Turigus which looks exactly like the bar in the infamous Han Solo/Greedo shootout in A New Hope if it were an entire country. As a story that takes place on a global scale, it’s also refreshing to see them use lesser known, prior existing cities as settings. Seeing them stray away from Hollywood favourites like New York, Paris, and Tokyo in favour of ancient, historic cities like Siraf and Maurya really help set the tone for the readers and even provide a better understanding of characters.

The well-drawn characters are complex and diverse in both their appearance and personality. The Knight Guardians themselves boast a roster riddled with characters from all over the world. This multiculturalism and gender diversity make it clear that co-writer Taran Chadha and TITAN1STUDIOS’ Executive Producers Rathan Moorthy and Navaid Mansuri are native to one of the biggest cultural melting pots in the world, Toronto. The sense of global awareness this provides makes the inclusion of all these races and groups a lot less forced and faux than many other comics that try to accurately display a worldwide view. The character Ania will probably be held nearest to the hearts of readers. She’s a ruthless fighter who isn’t afraid to disrespect and speak her mind, yet she can still be a very introspective caregiver who feels a deep sense of guilt for her violent tendencies. On The opposite side of the spectrum, the main antagonist Zentner Van Heerden, although mysterious, is a big part of what gets me so excited for upcoming issues. He has an edgy backstory that reads like a Boba Fett/RoboCop spin-off with a Darth Vader sense of entitlement every time he enters a room.

Another strong point is the outrageous situations characters manage to find themselves in and how they use dialogue to deal with it. Some of these predicaments can be compared to the Saw franchise’s ability to force feed you the question of “what would you do?” At one point, the maniacal Zentner van Heerden forces a government official to choose between his wife and his secret homosexual lover to be killed, a predicament that doesn’t even come to a conclusion until the release of issue four.

Along with this inventive situational dialogue, there’s still a good amount of action to hold your attention. The sadistic side of the writers will slide through in a couple panels, even to the point where you just want it to stop (see: Issue #2’s torture of Ania by Pires and his toddler-aged daughter). Although offputting at times, it’s scenes like this that really bring out your inner slasher flick fan and make for a good break from the often non-sequitur scene cuts and dialogue

Knight Guardians of Relativity issue #4 serves as the conclusion to the miniseries and it’s a surprisingly engaging comic to read, even if you haven’t read the first three issues in the series. The story has already been talked about at length and this concluding chapter manages to deliver some great dialogue and an intriguing cliff-hanger. However, it’s the art that really stands out in this issue.

Abel Garcia’s art is expressive yet muted, bringing a grimy sort of sci-fi edge to the world and its inhabitants. There is a ton of over-the-top action in this book,  that ranges from bear attacks and exploding missiles to cyborg fights and city shootouts, yet somehow this issue still manages to make those moments feel grounded and necessary instead of feeling cheap and tacked on.

A significant reason why Knight Guardians of Relativity #4 manages to inject so much action into its pages without it feeling bloated is the solid character interactions and way in which they are drawn. The characters in this series have deep lines on their faces, which illustrates how worn down they are, which ultimately makes them feel more human and relatable. What’s more is that we rarely get to see full shots of character’s eyes, making the scenes that feature them all the more powerful.

Seeing as this miniseries is based on a book, we could very well see future series that pick up from the cliffhanger at the end of this issue. However, if that day never comes then at least this series was strong, engaging and most importantly, a whole lot of fun.

Liked this article and want to read more like it? Check out Alex Handziuk’s look at the Future of eSports and his Interview with Overwatch Voice Actress Lucie Pohl.

Altogether Knight Guardians of Relativity seems more like a big budget publication more than it does an independent one.