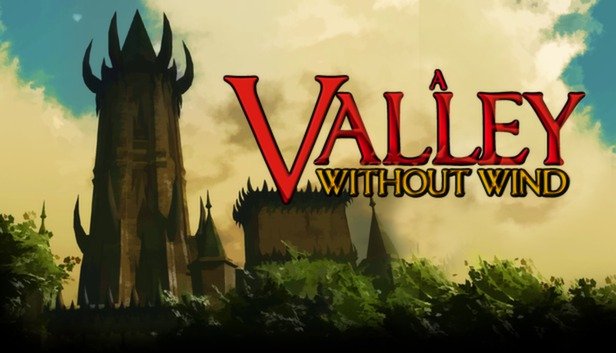 Here’s a game that should make all those obsessive-compulsive gamers very happy for countless hours on end. For the others, A Valley Without Wind is still a decent game and a pretty fun platformer.

The basic story is, after the apocalypse the world of Environ is in ruins and only a brave few souls with special powers can help save what’s left of humanity.  There’s also the problem of rebuilding civilization, and defeating the evil overlord thus bringing peace to the shattered land. Stop me if you’ve heard this before. Into this backdrop, the player controls a “glyphbearer”, a person possessing ability to use great magical power.

The game plays out in standard Metroid-vania fashion. It’s a 2D sidescroller with intricate levels, many abilities and varied enemies to fight. It might seem very basic but there is a surprising level of depth and difficulty to the game. You’re not just playing a hero, but rather a line of heroes, as you are expected to die… a lot. The spells and enchants you gather through the game pass from one hero to the next, so you’re never really losing out.

There are a lot of spells and enchants for you to pick up as you play through the game. The spells are your main means of attack and range from up close and personal blasts to beams and projectiles that you fire at distant targets. Each spell has an element tied to it, this is important when facing the various enemies you come across, as each has its own resistances and weakness. Enemies also have different attack styles. Some will charge right at you while others launch spell attacks of their own. If you’re stuck with a melee range spell while facing an enemy that likes to keep their distance and zap you, you’re going to be in for a tough go of it.

To help bolster the spells and to make life easier on you in general are the enchants. These give you a wide array of bonus effects and are equipped in various slots on your character. These vary from buffs to how high to can jump, to spell cool down reductions, to boosts to the damage of various elements. A particularly useful one to find is an enchant that functions as a light source, because there are many levels which are pitch black.

Finding enchants works in two ways. The first, and least likely, is to simply find one lying about on a stage somewhere. Just pick it up and it’s yours, though usually it would have meant defeating a boss first. The other way is to find enchant containers. These are scattered around everywhere and will be your main source of enchants. As you pick them up they slowly fill up a percentage meter, once you get that to 100 per cent you are given an enchant. Of course, it’s completely random which enchant you happen to get and finding a copy of the more common effects happens a lot. Though there are some enchants which actually affect the odds of what type of enchants you will find. But it’s mostly down to luck.

Aside from the endless exploration and combat, there are various missions to undertake. These range from defeating a particularly powerful boss (or even a series of bosses) to defending crates from falling meteors to rescuing lost citizens. As you complete missions you will earn Civilization Progress points towards your continent. As the CP rises your town improves, but at the same time it increases the power of all the enemies you face. Even 200 CP raises the world a tier and once you hit 1000 CP the only thing left to do (beyond endless exploration if you so choose) is to defeat the overlord and free the continent from evil. Of course, once that’s done, then what? Well, you head to a port and take a boat to a new continent that will be even larger and more complex than the last. The game also features multiplayer. You can have a friend hop in to your game and battle through areas together or even split up and try to cover as much ground as possible.

It’s not all rainbows and sunshine in the post-apocalyptic world however. The game does have some issues. One of the main ones being the clunky and poorly explained interface. There are a lot of things to do but it’s not always clear on just how you do them, such as upgrading your town. The mini-map provided in game does a decent enough job of helping you get a general idea of where you are. Though it’s not the tradition 2D map you’d expect in this sort of game. They use a graph based system, so instead of showing you the actual level layout it’s instead showing you how many rooms are connected to another. It’s incredibly easy to get lost in this game especially with how massive many of the zones are. As far as presentation goes, the game isn’t anything too special. The graphics are simplistic (but not ugly) and the music is passable. It’s not what you’d call bad, but it’s definitely not up to specs with many of the indie titles being released these days.

There is also the issue of bugs. The game is new and being patched often but there are still plenty of things that go wrong. I’ve had rooms that wouldn’t load, item icons on the map that wouldn’t disappear after I picked up the icon, missions that wouldn’t complete properly and I’ve even lost my entire world. While the bugs are apparently quite rare, especially the game killing ones, they do exist and that’s a definite problem.

Overall the game is fun and a great time sink. It’s very easy to sit down expecting to pass a little time only to find that you’ve been playing all day. And with the huge number of spells and enchants there are countless combinations available giving you tons of options on just how to play it. But there are still a lot of issues with stability. So if this is your type of game then you might want to pick it up. If it sounds interesting to you but you’re not sure, you might want to give it some time and see how well the patches turn out before you invest.

It’s very easy to sit down expecting to pass a little time only to find that you’ve been playing all day.
REVIEW SCORE
6
File Under: Horror, PC