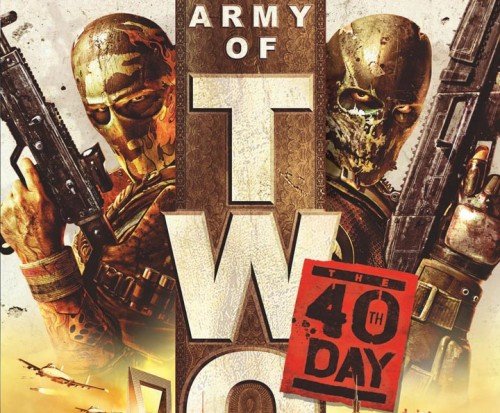 Released back in 2008, Army of Two attempted to emphasize co-operative gameplay. However, numerous setbacks including faulty AI and risky matter prevented the title from achieving anything more then a minor hit. We are pleased to announce though that the follow up Army of Two: The 40th Day, released by EA Montreal earlier this year, has surpassed the previous disappointments on almost every conceivable level.

Clocking in at roughly six hours playing time, Army of Two: The 40th Day revisits series heroes Salem and Rios, a team of skillful mercenaries who are looking to settle some unfinished business in Shanghai, but then find themselves unwittingly stuck in the middle of an all out war. The city is under a massive attack, buildings are collapsing, people are in trouble, and it is up to Salem and Rios to set things right and help stop the widespread devastation. As with mos blockbuster style games, the players must blast their way though waves upon waves of diligent enemies within a trecherously wartorn setting. The stylized action sequences are plentiful in this game, and the majority of the visuals are truly stunning to behold, even if overall storyline lacks meaning and cohesion.

The 40th Day provides a new take on the original game by allowing the players moral judgements effect the outcome of the game. As the plot continues to unfold, the decisions between what is right and what is wrong are rarely obvious in the moment. In fact, players will sometimes find themselves taking the bad choices simply as the result of a well-meaning accident. As in real life, consequences sometimes follow almost immediately via a short slideshow which highlighting how the decisions will later affect the world as a whole. While it’s an ingenious tactic, the immediate impact of these choices are rarely felt within the game play. This results in an intermittent disconnect between the player and the moral decisions they are forced to make.

Visually, The 40th Day does a commendable job at presenting a series of believable events: the buildings look properly aged and lived in, the characters appear in correct proportions to their surroundings, and the tangled landscapes capture the ominous feelings of a war torn city. The combat sequences have also received a noticeable improvement from first installment. The EA Montréal team have cleaned up their ‘cover’ mechanic, which works much more fluid this time around . While the ‘sliding-to-cover’ is a nice fight scene addition, it can remind players a bit too much to similar moves in Gears of War 2. On the other hand, the addition of ‘destructible cover’ adds a new element to high-tempo fire fight One odd feature of The 40th Day game is the customizable character option The player can alter everything from the mask he wears, to the gun he holds, and how those weapons look Some of these changes have immediate and tangible real effects on the gameplay. For instance, if the gun is made out of solid gold, enemies will focus on the player rather than their partner, and this can be useful in diverting attention from the partner’s sneak attack The reverse can be said, however, if you make your gun inconspicuous through additions such as a silencer, or camouflage colour. Then enemies will focus on the player less, allowing for more stealthy operation What works well about these customization options is that how you choose to build and operate will funnel into gameplay being either aggressive or defensive.

The AI for the partner player is another noticeable improvement over that in Army of Two, especially in the way as you are now able to play large portions of 40th Day in single-player format. In fact, sometimes the AI partner is an active help which not only supports you in the gameplay, but provides valuable assistance throughout the experience.

Where The 40th Day truly outshines its predecessors is in the co-op play option. Working as a team not only provides entertaining gameplay, but it also allows for a multitude of methods for dispatching enemies, including the ability to have one player move aggressively and one move covertly. Sometimes the results of these seem fantastical, like ability to creep unnoticed past your enemies simply because they are distracted by your partner. But on the whole, this new level of play is a satisfying sequence of event

The multi player modes are also fun to play, but they lack any rticularly innovative gaming competition. The 40th Day also comes equipped with interesting multiplayer modes such as Co-op Death Match, which pits teams of two partners against each other. With proper co-ordination this can be rather engrossing, but without proper team synergy, this game mode can be very frustrating. Army of Two failed to live up to the promise that it presented in 2008, but its sequel certainly doe Don’t go into this expecting a deep storyline or complex characters, as you will not find that here. However, what you will find is a fun, six-hour experience that can be indefinitely extended with online co-operative gaming. If you are a fan of this genre, or just want to play out an action movie with a friend, Army of Two: The 40th Day is a game you don’t want to mis

Army of Two failed to live up to the promise that it presented in 2008, but its sequel certainly does.
REVIEW SCORE
8
File Under: Shooter, Xbox