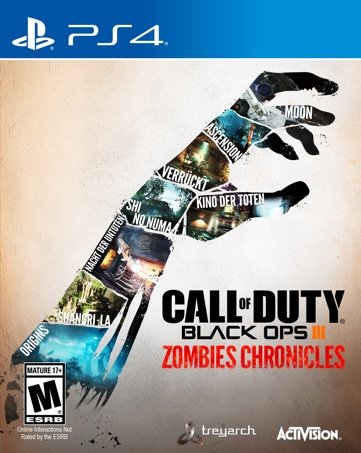 Call of Duty: Black Ops III is quite literally back from the dead. In an uncharacteristic move by Activision, who typically only supports individual Call of Duty games up to a year, the third Black Ops (released in 2015) is getting new content. It’s in the form of eight remastered zombie maps, but it’s something!

Hate it or love it, there’s a cult following for the limitless horde-like Zombies mode in the Call of Duty series. So much so, in fact, that whenever Activision’s stable of developers try something new with an extra mode, they usually just circle right back to Zombies the following year in comical fashion. At this point, all three core teams have incorporated Zombies into their annual entries — it’s that big.

Naturally, a remaster collection should bring us full circle, which is exactly what Treyarch did by including “Nacht der Untoten,” the original that started it all in World at War. It warms my heart to see the first ever zombie map, which I spent many a night playing years ago in the dorm, back again. It’s only three rooms with no sprawling Easter egg quests to speak of, but it highly benefits from the tweaked AI in this new coat of paint. Some might feel like it’s too cramped, but that’s what sets it apart from the labyrinthine mode zombies is known as today and is a fun diversion from the archetypal overwhelming complexity.

Speaking of the visual upgrades (mostly the lightning) and the AI improvements, the first three legacy maps (“Nacht der Untoten,” “Verruckt” and “Shi No Numa”) actually benefit the most from the upgrade given that they were formally introduced in 2008. The latter two are a bit bigger than the former but they’re still streamlined, even if the Gobblegum (read: temporary power-ups) system has been shoehorned in, (optional, albeit annoying) microtransactions and all.

By the time the fourth map, Kino Der Toten rolls around, the Zombies mode starts to show some grit. The arenas get bigger, the miniature quests and nods start leaking in, and by the time you hit “Ascension” and “Shangri-La,” it gets even more tense as you start to complete quests on top of the ever-present stress of merely surviving. While said adventures are finicky, and require a lot of guesswork (or meticulous studying with printed Wikipedia pages in hand), they’re still just as satisfying to pull off with a group.

Moon is the exact same way, but you might hit a wall with “Origins,” one of the most complicated levels in the DLC (which is good or bad depending on your dedication). I felt this way both at the time of its release, and during my testing with Zombies Chronicles, and it wasn’t necessarily related to the subseries’ constant attempts to one-up itself. The original Second World War era cast has its charms, but only in short bursts. Playing as them yet again, even in younger form with some nuanced quirks in Origins, is a bit too much. I would have loved to have seen some of the more out there squads from other add-ons too.

Due to reasons that are likely related to licensing issues with the personalities involved, the George Romero “Call of the Dead” and “Mob of the Dead” are omitted, along with several others like “Green Run,” “Nuketown Zombies,” “Five, Die Rise,” and “Buried” — and the entire Exo Zombies catalog from Advanced Warfare (“Outbreak,” “Infection,” “Carrier, Descent”). But along with “The Giant” (a Der Riese remake) and a few others in the base Black Ops III as well as the other optional DLC, you basically have the entire zombies experience. I’m mostly perplexed as to why “Five” wasn’t included though, which, along with the aforementioned “Call of the Dead,” makes the attempt to chronicle the original Black Ops incomplete  —  did the depiction of US presidents (and officials) not go over well?

While a standalone game that also offered “Extinction” (the short-lived alien variant) would be even better, Zombies Chronicles gets the job done and hits most of the high-notes the subseries has given us over the years. It’s going to be a little awkward if you sold your copy of Black Ops III, but otherwise, it’s worth booting up with some friends.

Zombies Chronicles gets the job done and hits most of the high notes the subseries has given us over the years.
REVIEW SCORE
7.5
File Under: Activision Blizzard, Treyarch, zombies