A Cute Must Play Masterpiece 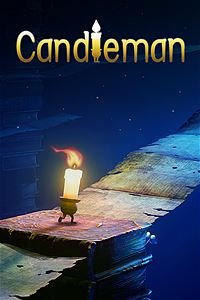 Until recently, consoles hadn’t been sold in China, but now that they are, we are starting to slowly but surely get games developed for consoles by Chinese developers. Candleman is one such game, and guess what? It is bloody brilliant, and the best 3D platformer I’ve played since Super Mario 64!

You play as Candleman, a thick little candlestick with legs attached to his holder who is on a quest to find out the meaning of life and why he exists—deep stuff for a game about a walking and talking candle man (why not a candle person? I don’t know).

Stage titles are verses of a poem that tells the tale of Candleman, with every other line revealed by collecting all the candles in each stage. While this alone is cute and effective, there are also adorable little cutscenes with a female narrator telling us Candleman’s feelings and thoughts. The story will surely strike a chord with many people, as who hasn’t questioned their purpose in life? I will caution, however, that the ending will surely shock some players, as it did me. I definitely had to take a moment to collect my thoughts after seeing it, which isn’t really a bad thing but certainly not what I thought would happen.

To find Candleman’s answer players will be platforming across levels that take place in beautiful locales such as a water-logged ship rocking back and forth, a jungle with giant vines and flowers, a library with massive stacks of books, and so on. As these levels are mostly dark so Candleman must burn his wick to momentarily light his path, however, he can only do so for ten seconds total in each stage.

If that sounds annoying, let me assure you that it isn’t. Candleman himself can easily be made out pretty much the whole time, and the level is also scattered with non-living candles that players can light to help guide the way. Most of the time I found myself just quickly tapping the button to light up my surrounding for a moment before continuing, just to see any obstacles in my way. Each level offers a new way to use the flame that keeps things feeling fresh and interesting until the thrilling and dramatic end. The jungle level has giant flowers that instantly bloom when lit by Candleman’s light, while another level has invisible platforms that only appear for a brief moment after being lit.

The actual platforming controls are tight and intuitive. I never felt like my deaths were unfair or due to me playing with the controls. That said I didn’t have much trouble dying at all as Candleman is pretty easy aside from a stage or two. I even managed to get all the achievements and 100 per cent completion without much fuss as they simply require players to complete levels with all the candles lit, which isn’t exactly hard to do. If you’re looking for a challenge, look elsewhere.

However, if you’re looking for an adorable game with tight platforming, a unique lighting mechanic, fantastic graphics and level design that constantly introduces new gameplay elements, then Candleman is for you. Just be wary of an ending that is possibly the darkest closure to one of the cutest games I’ve ever played. Pun intended.

If you're looking for an adorable game with tight platforming, a unique lighting mechanic, fantastic graphics and level design then Candleman if for you.
REVIEW SCORE
9.5
File Under: