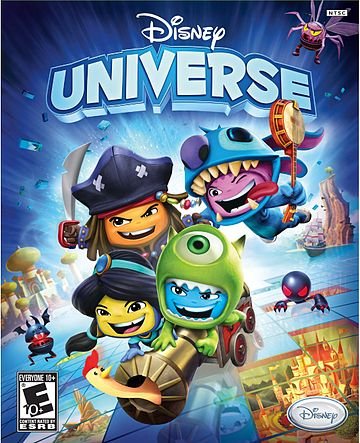 Did you play Kingdom Hearts? Did you cringe openly when you realized that it was a Final Fantasy-style RPG with platforming elements, set in various Disney worlds, with Donald and Goofy as your party members? Did you find yourself surprised when it actually did the interaction with the movies well, and felt enjoyable?

That was how I felt, and I can’t help but feel that Disney Universe is trying to do a similar thing with its cross-movie setting. However, it doesn’t quite capture the same effect, due to repetitive nature and non-challenging levels.

Let me be blunt: this game annoys the living crap out of me. If I have to hear ‘Awwwwwwww YEAH’ play along with technohiphop when I beat a level, or see my manic blue alien in a Tron jumpsuit grin like he’s driving a Cadillac, I’m going to punch somebody. However, that can’t really be held against the game’s technical side, which is functional, if repetitive and slightly annoying.

The game is set a virtual world called Disney Universe, where Disney franchises are brought to life to allow guests (who are apparently some kind of alien, given that they’re all little blue/green people) to dress up as characters and live out the movies. This works out until the robots which populate the world go evil, and your cube-shaped guide Vic turns into Hex – a creepily over-enthusisatic evil cube who wants everyone to be hypercompetitive. Your goal becomes to rescue the guests and try and wipe out the mad robots. Some minor cutscenes attempt for humour, but they’re not really funny.

The levels focus mostly on recent Disney titles: Pirates of the Caribbean 4, Wall-E, the Burton Alice in Wonderland film, and Monsters Inc., with a few classics like Aladdin and the Lion King thrown in. Most of them are pretty similar in structure; the same ‘move this here to open the way; move this along the path so that you don’t die’ mentality fills it all. There are usually multiple methods to pass a section, if only because in multiplayer only one person can make use of one path at a time. The game is littered with collectibles, mostly coins which let you unlock new costumes (based on characters from the movies), or new levels, but also special items based on the level which unlock music, concept art, and character drawings for viewing, and stars that make your attack stronger. Powerups drop, or negative-effect ones drop and follow you around in multiplayer games. Keys and other objects can be found to open other areas of the map, and guests you rescue serve as new costumes for you to wear (which still require payment to unlock; see below).

There’s also some really….strange references in the game. For example, one of the minigames you can play is called Farming Gold – I’m a bit frightened that anyone who’s 10 will know what gold-farming is (I’m old, you see). Pigs can be ridden as a weapon, who attack by farting. Yes, farting – sheep stomp the ground, donkeys kick, and pigs fart on enemies.

The monsters are largely the same each time. Most little enemies either fly or run at you, steal coins, and build machines or obstacles that really only provide slight inconvenience. Occasionally, a huge enemy will spawn, which requires a lot of beating – but I’ve never found it to be too much of a challenge to avoid their attacks, even when its impossible to hit the Y button at the right time (it appears above certain attacks to indicate a quicktime dodge). You’re more likely to die trying to gauge where you’re going to land or by falling off of something, not that death has any consequence. Boss monsters end each set of three stages, completing a world – these mostly consist of shooting specific targets and following the prompts, and aren’t usually more challenging than a few minutes of time.

The game is tremendously forgiving; health drops from nearly every enemy, and dying doesn’t do anything but respawn you instantly with a minor loss in coin. Since your health is just a circle around your feet, it’s very easy to lose track of it, but it doesn’t honestly matter because dying is meaningless. Gold is used to unlock stages for play, and the costumes of people you rescue. However, the stages really don’t feel any different; there are some bosses and unique obstacles, and new enemies that show up, but none of it adds anything new. Arrows and text tell you exactly what to do and where to go; the only sense of discovery is looking for coins or items, and even then it’s regulated to running to the edges of the screen to find stuff. You can turn off the arrows and find it yourself, but everything needed to finish the stage is right in the open anyway; even a 10-year-old is going to get this.

The costumes literally have no difference beyond appearance – you can only upgrade their attacks so far, meaning you should probably switch when you’re fully upgraded, but it’s just another excuse to make you collect things. The game is full of these; it’s all about collecting to unlock concept art, collecting to get money to unlock costumes you’ve found or new levels, collecting so you can hurt people (and then going back to square one so that you can maximize someone else). It’s pretty transparent, and makes the gold farming reference eerily self-aware.

The game is, in a word (or two), entirely wasted on single player. Hex’s negative powerups don’t even come into play in one-player (they’re largely useless anyway, and even the positive powerups aren’t that useful). Switches are timed in single player to allow you to use them; with more than one player, one has to stand on the switch while the other moves across. Teamwork makes things go faster, but, like the loading screens hint, beating on each other is just as viable. Competition and teamwork are both encouraged.

A few minor issues come up with perspective, particularly in multiplayer. It’s easy fall off of things because of the camera, and even with the circle that appears beneath you to show when you’re under something, it’s easy to leap wrong and fall to your barely-noticable death. The static camera makes some areas hard to find, especially when your other players are far apart and prevent the camera from properly moving. I spent a lot of time on the pirate ship trying to find where to go, despite the arrow prompts. You can turn the guides off easily enough, if you want to figure it out yourself; main objectives are straightforward enough anyway.

This might be a fun game for your kids, and lets them play in Disney worlds. However, it doesn’t have a long life, and might bore even the most easily-amused kid with repetition.

I can't help but feel that Disney Universe is trying to do a similar thing with its cross-movie setting. However, it doesn't quite capture the same effect, due to repetitive nature and non-challenging levels.
REVIEW SCORE
6
File Under: Adventure, Disney, Microsoft, RPG, Xbox