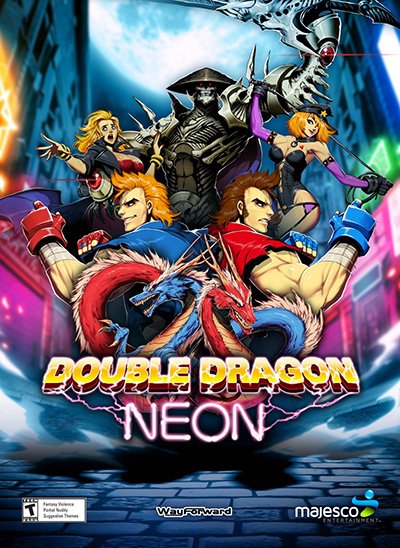 I think games like Double Dragon Neon inadvertently make a statement about where gaming is today. There was time (during the 80s itself, coincidentally) when baby boomers pining for the simpler, headier, more passionate days of the 60s would wax nostalgic with music. They did this by viewing badly produced informericals that offered “mix tapes”—and later CDs—of old popular favorites from the era, sometimes by the original artists, more often than not covers in order to save on licensing costs. It was a testament to how people could take pleasure from the past, enjoying something not for it actually was, so much as what it once was in a different time.

Billy and Jimmy Lee are brothers with a simple problem; the girlfriend, Marion, has been kidnapped by some bad dudes, and they need to get her back. That’s it. That’s the plot of the entire game, remaining utterly faithful to the 1987 arcade original, right down to the opening scene of Marion getting punched and carried away as a garage containing our two heroes opens up just 10 seconds too late to stop the madness. From there, Double Dragon Neon goes on an 80s obsessed, neon drenched fisticuffs crusade with its tongue so firmly in cheek it breaks the skin and starts licking its own face. Space, ninjas, haunted forests and Nordic “tape smiths” are just a few of the ridiculous elements scattered with obvious love and irreverence throughout the entire game. If a group of 15 year olds fed on a strict diet of Fruist Gushers, Tab Cola and “Don’t Stop Believin’” as their personal anthem were given 21st century coding abilities, Double Dragon Neon would be the result.

The biggest change to the game is definitely in the graphics department. It’s now a mix of 2D backgrounds with 3D characters that are seamlessly integrated to make a splashy, bold, colorful look in keeping with the retro-styling of the game. This is not one of those games that will ever be accused of living in a monochrome world of greys and/or browns, and for a smaller development effort, the look of the characters is surprisingly detailed and robust. It’s also unapologetically sexist, but it’s a game about the 80s when men were men and women were the reason men went out and beat up other people. The simple, 80s era pixel characters are now bright, simple polygonal figures almost reminiscent of characters from the cover of Grand Theft Auto: Vice City with flashy color, clean details and hyper-stylized body proportions.

The audio complements the look, but in some ways, might just be the real star of the show for Double Dragon Neon. The music is the main event, with “retro updates” of the original soundtrack (think how Double Dragon would have sounded if it had had the budget to hire a new wave synth band in 1987) and a lot faux-80s tracks. It’s the new tracks that are the most surprising, pulling some dead ringers for musical style from the likes of Depeche Mode to Devo and all guitar-laden  points in between. Jake Kaufman, composer of the game’s soundtrack, has an awful lot of love—and intimate knowledge—for the music of 80s and he pours every genre conceivable into every orifice the game has. Just when you think there couldn’t possibly room for one more gratuitous guitar solo, Kaufman finds a way. The voice acting is laughably—and intentionally, I hope—bad, evoking the ludicrousness of Double Dragon peers like Bad Dudes or, stepping into the 90s, with the legendary awfulness of Resident Evil. Not a single word of dialog is delivered in a credible, believable way but in many ways, that’s the point.

Bad puns, non sequiturs and over the top delivery are all on display, with pride. Sound effects also adhere to the 80s standard, with seasoned cartoon veterans likely to be shocked when they hear classic effects such as the Generic Thunderclap that graced every cartoon of the decade alive and well in Double Dragon Neon. The actual combat sound effects fall somewhere between the original 8-bit sound and more realistic slams and kicks that take better advantage of the superior hardware of the 21st century. It’s not a speaker heavy experience from a surround sound standpoint, but perhaps that too is a nod to the 80s influence. People playing in old fashioned stereo aren’t really missing anything by foregoing a multi-speaker set up.

The foundation mechanics of Double Dragon Neon are the same as the original; move from left to right, hit anything that’s not you or your buddy. That’s it. You have fast punches that do less damage, and more powerful kicks that are slower to unleash, along with the ability to run and jump, combining that with your attacks for additional moves. All of this was in the arcade original, along with a certain cheapness of enemies in order to encourage more quarters pumping into the slot. The cheapness is also present, as is a lack of checkpoints within levels, meaning that if you die and continue, you still need to start the entire level over again, which makes the “continue” function rather pointless until closer to the end of the game.

The first thing most people will want to know is “How is the combat?” The answer is, “Mostly like a 80s arcade game.” By modern standards, the combo system is nearly nonexistent, and the hit detection of enemies on varying “planes” feels dated. Weapons are still available that are dropped from enemies and have a limited number of uses before they break. But, and this is an important “but” this is a recreation of Double Dragon and a celebration of 80s cheese. If you go into this game knowing that you’re taking a time machine back to the game design era of 1987, you’ll be fine with these quaint, now archaic mechanics. This is simplistic game design and nothing here will win awards or engage your hind brain the way the top AAA titles of today do.

But that’s not to say that there aren’t any new additions at all the game. First and foremost the game is built around re-playability, with every level capable of being revisited once completed. There’s now an RPG-lite system of sorts in the form of tapes. Enemies drop different mix tapes with different abilities. Some of them are new special abilities, others are permanent passive ability upgrades. The player has the choice of equipping one special and one passive ability from the range of tapes available, and these abilities do everything from allow an invincible spin kick, summoning dragons, lending a massive damage boost when player health falls below 50%, or increasing the damage and life-span of weapons.

These new passive and active abilities can be upgraded further by collecting more of the same tape. All of them start with a ceiling of 10 tapes before upgrades stop stacking, but you can increase the ceiling on this by collecting Mythril from boss fights and upgrading your tapes from the previously mentioned “Tape Smith.” So for people that don’t feel like learning intricate attack and dodge patterns, it’s actually possible to “bull doze” your way through the game by simply grinding a few levels for tapes and/or Mythril to upgrade your character to the point where you can ignore most attacks and just bludgeon without finesse. This, in true RPG fashion, will take some time however.

Combat has also received some tweaks. A new dodge function has been added that can be combined with movements to result in rolls and jumps as well as a standard “duck” maneuver. It’s not just handy getting out of the way of attacks, a successful dodge also enables “gleam” which allows your hero to do double damage for a short period of time. This gleam function also plays into co-op (which is strictly local at this time) where you can high five your partner for a gleam boost as well. High fiving also features two other functions, one where the brothers can share health someone is low, and the other, for those Jerk Moments, can siphon life from your partner.

One modern day convenience that’s now been added is the ability for partners to revive each other. If one of the Lees goes down, the other has a small window of time to run over and mash a button repeatedly, which brings up an icon of a cassette tape with the tape spooled out of the case. A pencil inserts into one of the reels to wind the tape back into the housing. Once all the tape is back in, the downed Lee is back in the fight. This mechanic is both hilarious and sad in that 50% of the audience—the ones that weren’t alive when Ronald Regan or even Bill Clinton was president—may not even understand the reference at all.

If there’s one serious criticism I have of the game it’s only that the hit detection on some enemies—particularly later female ones—can be a bit cheap. The nature of a 2D side scrolling game dictates that combatants must be on the same plane in order for hits to land. However, with some enemies, such as the Geisha Girls, the hit detection is dramatically skewed in their favor, so that while you must be on the EXACT, pixel perfect plane in order for your hits to land, they don’t have such a harsh restriction and can successfully attack even when slightly “above” or “below” you.

That one criticism aside, Double Dragon Neon is a must-buy for a specific audience. If you’re a fan of 80s culture, and can tolerate dated combat mechanics, then buy this game, without hesitation. Anyone with a broken nostalgia capacitor who is unable to enjoy anything but modern game mechanics may appreciate the 80s cheese and not much else. This is not an amazing game from a pure design perspective, but this is one of those occasions when style wins over the substance, and the deliberately retro mechanics are effortlessly in tune with the over the top 80 aesthetic.

Which is my round-about way of saying that your enjoyment of Double Dragon Neon is almost entirely dependent on whether you can accept “Most triumphant” as a grammatically correct phrase.
REVIEW SCORE
8
File Under: