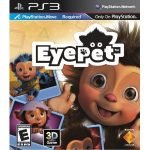 EyePet is not actually a new game. It’s an old game, already released for the Playstation Eye peripheral in Europe, that has been re-purposed with PlayStation Move functionality for the North American market. But the heart of the game remains the same; a virtual pet simulator that manages to convey an endearing and surprising amount of interactivity.

The EyePet itself is a diabolical mish-mash of a puppy/kitten with a baby or monkey. The result is a dangerously cute, large-eyed virtual pet that comes with some Tamagotchi-like maintenance requirements for food, exercise, cleanliness and even creativity. This is not a traditional, hardcore game, and it’s not being reviewed as such.

This is essentially a “toy” for families to interact with together. The premise of the game is that, after hatching and naming your Eyepet, you can go through a series of daily programs, 15 in total, that broaden the interactive possibilities with your virtual pet. While it’s possible to power through the suggested daily regimen, the game will prevent you from doing more than three daily programs in a 24-hour period, ensuring that some pacing of activities is still in effect.

Activities with the pet range from simple petting or “tag” style games to more complex activities such as teaching it to draw or sing. There’s nothing here that will appear to a traditional hardcore gamer, but for a gamer with a family, this is the perfect way to use a PS3 and still get some time in with the kids.

“The bulk of Eyepet is a solid, engaging family activity game.”

The graphics are cute, the music is inoffensive, and the way you interact with the EyePet is surprisingly effective. Users have two options, interfacing with the Move controller or using hands, assuming the room is sufficiently lit for the PS Eye camera to detect them. The Move controller offers more precision and is easier to use in lower lighting conditions, such as playing with the kids in the living room with only a lamp or two on, but it’s more natural and intuitive just to use actual hands to stroke the virtual pet, or even play card games with it.

The only real downsides to the EyePet game are the limited number of activities and some poorly conceived tutorials. Once you’ve gone through the 15 daily programs, you’ve seen all that the game has to offer, which is likely not going to be an issue for younger children, but parents and older siblings may find little reason to go back to the game once they’ve seen everything the EyePet can do. The other issue, poor tutorials, is a little more serious but also more isolated.

The game’s daily programs offer certain challenges to meet, usually involving using a new interactive tool learned that day. Some of these challenges do a poor job of explaining how to use the new tools, such as a microphone that is supposed to record you singing in order to teach your EyePet how to sing. The tutorial fails to explain that YOU, the player, are actually supposed to sing at a certain point while pulling the trigger on the Move controller, which can lead to some confusion until it’s all cleared up by consulting the internet. For children’s entertainment, sending parents scrambling online for clarity is not a good situation.

Those nit-picks aside, however, the bulk of Eyepet is a solid, engaging family activity game. Young children, in particular, will delight in Eyepet’s antics. Some parental guidance is strongly recommended, however, so that kids don’t get it into their head that trying to roll up the house cat into a ball so that you can bowl with it is something that said cat will enjoy.

Nit-picks aside, the bulk of Eypet for the PlayStation 3 is a solid, engaging family activity game.
REVIEW SCORE
8
File Under: PlayStation, RPG