For over 20 years (that’s right, 20 damn years) Mario Kart has been one of the flagship titles in Nintendo’s roster. It started as a novelty that shoved all of the Mario mascots into a super-powered go kart simulator for chuckles and carnage. Then it turned into an institution. Many imitators have come over the years, but none have come close to topping the novelty racing insanity that Nintendo hath wrought! Nintendo has been good about avoiding overkill with the series too. This might be the second decade of Mario Karting, but the brand-spanking-new Wii U edition is only the 8th entry in the series. Nintendo likes to limit the franchise to one entry per console and as a result, it still feels a little special when each new entry comes along and each chapter arrives with a full facelift of new bells and whistles. As cynical as you might feel about the almost ancient Mario Kart series when you pop the new chapter into your Wii U, within seconds you’ll be seduced and reminded why this is such an indelible and inescapable series. It’s hard to say whether or not this is the best Mario Kart entry to date after only a few days of feverish play, but I can promise I won’t be reaching back to play any older Kart titles now that this sucker is available.

On a fundamental level, this is the same old Mario Kart. Controls are the same as always, as is the racing formula. Where this title separates itself from the pack is in the visuals and design aspects and they pack the wollup of a well-timed blue shell. This is a stunning game visually, in fact it’s probably the best looking game that Nintendo has released for their new system to date. Super Mario 3D World might have boasted a spectacular multiplayer platforming design, but aside from added sharpness didn’t look that much better than the old Mario Galaxy games on the Wii. Mario Kart 8 is another beast entirely. The game leaps off the screen with bold colors and deep details. Everything feels faster and smoother. Even on the beginner level 50 cc, this feels like a faster and more intense racing experience than anything released in the franchise before. Then there are the tracks and hoo-boy are those things impressive.

As usual, there are four racing circuits and two leagues with 32 tracks in total. The new tracks can be absolutely astounding to race through without ever feeling overcomplicated. The big new feature is the anti-gravity sections in which your Kart wheels turn sideways a la Back To The Future 2 and gravity disappears. It’s a device borrowed slightly from F-Zero, but taken to a whole new level. In particular, the new haunted house and airport levels fully take advantage of the delightful disorientation possible with this new mechanic. In the haunted house, you’ll find yourself uncertain of your grounding at times, and in the airport you’ll see giant 747s taking off around you at inopportune times. It will never cost you a race like those f-ing penguins from Mario Kart 64, but it does add immeasurably to the intensity and immersion of each and every race. Toss in the flying/underwater mechanics from the 3DS chapter in the series and you’ve got a series of deep a varied racing experiences that feel completely unpredictable on the first few rounds. Half of the tracks are classic tracks from previous editions, as has been standard for a few rounds of the series. However, Nintendo have not only given them a graphical facelift, but also added anti-gravity sections and shortcuts that, in each and every case, only makes these trips down memory lane more challenging and intense.

You’ll of course be flinging items around again, and there are plenty of new ones. Along with the standards like bananas, red/green shells, and the Bullet Bill catch-up system, Nintendo has added fantastic new items. There’s a Piranha Plant that chomps up any neighboring racers or items, a boomerang that can be tossed out thrice, and a super horn that blows up any item within a certain radius (including the previously unstoppable Blue Shell! Finally!!!!). The new items are all fun, but what’s more impressive is how Nintendo even improved the mechanics of old items (the Green Shells are now possible to aim with a certain level of accuracy) and drop useless ones like those fake boxes that never fooled anyone. Unfortunately, Nintendo has also made it so that you can only carry one item at a time (so no holding a shell behind you and hoarding a second item), which is a slight letdown, but they’ve also added so many item pickups to every track that it’s hard to notice.

Of all the returning features, the only major letdown is Battle. It’s the same, but the arenas are just slightly altered racetracks and aren’t nearly small enough for a satisfying battle. It just feels like a race with balloons and is a major disappointment. Thankfully, all other multiplayer modes are a massive success. Local multiplayer is smooth as silk, even if the frame rate drops from 60 frames to 30 for four player local races (a necessary evil). Online multiplayer on the other hand plays perfectly, including when you have two local players in an online race. It’s here that competition gets truly intense/insane, and it’s safe to say that online Mario Kart racing will be thriving for years. Matches are easy to set up and control, with only the messaging system that’s a bit lazy, difficult, and censored (hey, that’s Nintendo for you!). Still, that’s a minor distraction, and if you want you can even save and edit highlight reels from your races to share online. I’m not sure why you would do this, but I can’t deny that the goofy racer looks even more gorgeous in slo-mo, so I guess that’s something.

Mario Kart might be a franchise that’s old enough to drink now, but this latest chapter doesn’t feel crusty in the slightest. Nintendo clearly took their time with this title, sitting on it and tinkering with it until it was the company’s first full-on showcase for what the Wii U can do. Seeing Mario Kart in HD is a joy, seeing it nudged into being such a deep, pretty, and gravity defying racing series is enough to make any Nintendo fan squeal with delight. Every title released on the Wii U before now was just a tease. Mario Kart 8 is the real deal and, God-willing, the gaming geniuses at Nintendo have even more facelifts and reinventions planned for all of their flagship franchises. If every other series gets a game this pretty, inventive, and solid, the Wii U might not be a dying system after all. It’s a little gaming box on the cusp of bursting to life.

Mario Kart 8 is the real deal and, God-willing, the gaming geniuses at Nintendo have even more facelifts and reinventions planned for all of their flagship franchises.

File Under: Donkey Kong, Gamepad, Luigi, Mario, Nintendo Wii U
A retail version of the game reviewed was provided by the publisher. You can read more about CGMagazine reivew policies here. 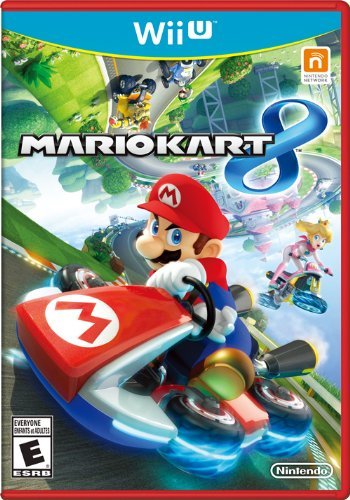