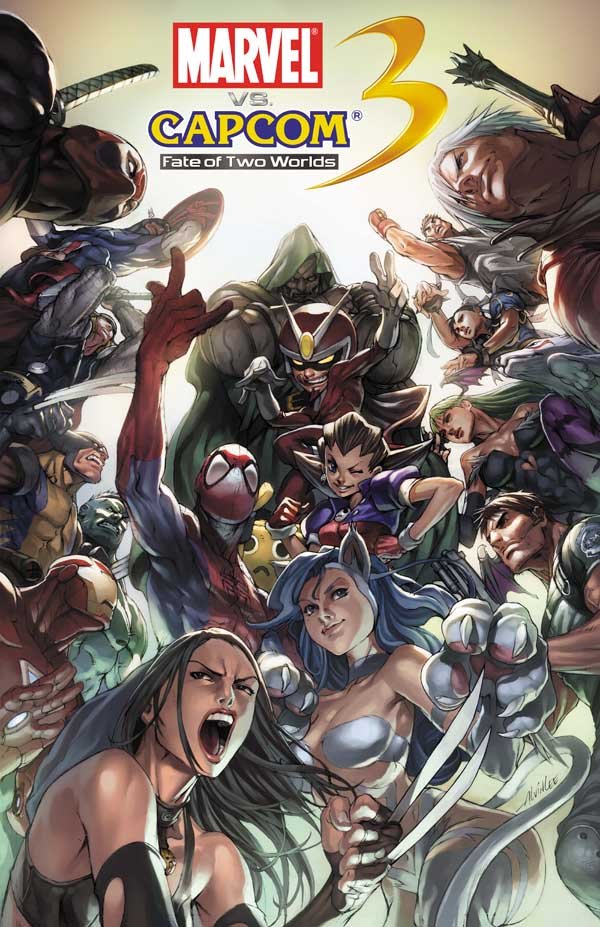 Before I start this review, a confession: after over 100 matches, I still suck at Marvel Vs. Capcom 3. This isn’t to say I’ve lost every match – my win ratio hovers somewhere around 30 per cent. I wish I could say it was the hardware, but I went out and purchased myself a Hori EX2 Fight Stick in preparation for some killer combos. And while I can definitely pull off special moves at will and perform some low-level counters, the sheer depth of Marvel Vs. Capcom 3’s combat system sometimes leaves me feeling like I’m dead in the water. Regardless, I keep coming back for more. Why? Because despite my poor showing, MVC3 is doing everything in its power to encourage me to insert another virtual quarter and I’m happy to oblige.

Visually, the detailed hand-drawn 2D visuals used in previous iterations have been replaced with a three-dimensional comic book style that is best described as a mix of Super Street Fighter 4 and Tatsunoko Vs. Capcom, the last two fighting games released by Capcom. Any fear that the series’ signature charm would be lost following the graphical transition can be put to rest. On the contrary, Capcom has pulled out all the stops with their graphical overhaul in terms of both character animation and visual pizzazz. From Deadpool’s exaggeratedly macho strut or the way Zero bursts into energy particles when he’s KO’d, Capcom has done its due diligence in staying faithful to the tone and style of each character. These may just be minor flourishes, but it’s nice to know that the developers really took their time to wow the fans.

MVC3 stays faithful to most of the core mechanics of its predecessors: 3-on-3 tag-team combat that emphasizes chaining together multiple attacks for deadly results. While this principle remains the same, Capcom has made some significant changes to the controls. Rather than being separated into kicks/punches, there are now only three normal attack buttons – light, medium and hard. Many special moves can use each button interchangeably, which generally affects the range and severity of the attack. Another two buttons are used to trigger assist attacks and switch between characters like in previous games. However, the biggest new addition is the “Special” button. A single tap launches your opponent into the air, prepping allowing you to quickly segway into aerial attacks and combos. In previous titles, the complexity of air combos meant only advanced players utilized them. The special attack button is a welcome change for novice players looking to get in on some aerial action. Despite this, a certain amount skill is still necessary to truly master aerial combos.

Another new addition is the X-Factor mode. By hitting all four attack buttons at once, your characters start become temporarily faster, stronger and more resilient. The length and effectiveness of your X-Factor depends on how many characters you have left – a lone X-factored fighter can do a devastating amount of damage in a short period. Since your X Factor can only be activated once per fight, it becomes a major strategic gambit that can be used to quickly turn the tables in a match.

MVC3 is a game with a ridiculous amount of depth. For every offensive attack there is a respective guard that can be used to counter it. Most moves can be cancelled mid-execution and replaced with another attack to further befuddle your opponents. While all of these options are definitely a large part of combat, just know that an average player can get by without using some of the more complex tactics. However, if you’re looking to take your game to the next level, you’ll definitely need to master them. On the flipside, MVC3 also has a Simple mode that allows players to perform special attacks and Hyper Combos with the click of a button. While definitely a great option for beginners, people with even a slight amount of combat prowess will probably tire of this mode quickly. After all, you can’t use it online, and let’s face it – competition is what this game is all about.

Fighting games have always been a notoriously double-edged sword when it comes to online play. When it works well, it’s the ultimate fighting fan’s dream – a limitless world of unique competitors beamed directly into your living room. But when it falters even a little, it quickly becomes their worst nightmare. Nothing is more frustrating that perfecting a combo only to have it fail due to a millisecond of lag, except perhaps not being able to connect to opponents at all. In these respects, MVC3 earns a tentative pass. While I’ve experienced a little bit of lag and had some trouble connecting to opponents, the majority of my time online has been largely rewarding – save for the occasional cheap player. This is because Capcom has taken a page from other games (most notably the COD and Virtual Fighter franchises) and made multiplayer a separately engaging experience in its own right. Even before you jump online, each player is given their own unique License, which displays your entire fighting career, both on and offline. Progressing as a fighter in either mode earns you PP (Player Points) that unlock achievements and other bonuses, such as new titles and avatars. I think Capcom should be particularly lauded for doing what so few games do – create a fluid bridge between single and multiplayer modes. Whether you’re losing in Ranked Match, beating the game a fifth time or simply working on your Guard Counters in training mode, MVC3 rewards you with Player Points. It’s an excellent system that makes getting your ass handed to you online sting a little less. Hey, you can’t argue with progress!

Another new multiplayer feature that I’m slightly less enthused about is the ability to create Lobbies. Up to eight players can jump in to a Lobby, where they can immediately jump into a battle queue – and do some verbal sparring before the real fight begins. While this is a great idea in concept, its execution in MVC3 is sorely lacking, for several reasons. First, only one fight per lobby can occur at a time. This wouldn’t be so bad if you could actually watch the fight in progress, but all you can do is watch tiny little life bar indicators of the current match. This isn’t so bad when I was playing in a private lobby with two friends, but I cannot imagine spending upwards of ten minutes between matches engaging in small talk with random players. Anything would have been better – a sparring mode, the ability to leave and be “paged” when your turn was up, even a little mini-game­– although these wouldn’t make up for the fact that you’re essentially dawdling, it would at least make the wait somewhat bearable. Still, the idea that I’m twiddling my thumbs waiting to fight in a lobby when there’s literally the entire world waiting to play me outside is mind-boggling. While interesting in theory, Capcom has managed to bring the most tedious part of the arcade experience – waiting for your quarter to be up ­– to console gamers. Hopefully this will be addressed in further updates, but until then most people will probably steer clear of Lobbies unless they’re making a concerted effort to play with friends (and catch up on vacation plans).

So, is Marvel Vs. Capcom 3 worth your money? If you’re a fan of either universe, you’ve probably already picked it up just to play as Super-Skrull and Zero, so I’m not talking to you. Also, if you’re already a hardcore fighting fan, I know my review has already fallen on ears deafened by the sounds of colliding fists. However, if you’re like me, a casual fan looking to give the fighting genre a solid try, or someone who’s never mashed a button in their lives (but wants to), buy this game. It’s fun, gorgeous, and guides you every step of the way until – like a baby Ryu bursting from his shell – you’re able to Shoryuken on your own two feet.

If you're a fan of either universe, you've probably already picked it up just to play as Super-Skrull and Zero, so I'm not talking to you.
REVIEW SCORE
9
File Under: Capcom, fighting game, Marvel, Microsoft