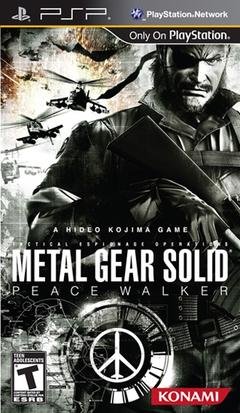 After making a game like Metal Gear Solid 4, you have to ask, where do you go from here? Whether you liked the game or not, it was audacious and big, taking all of the ideas associated with of the Metal Gear Solid series—its stealth game play, its long cutscenes, its convoluted story, its fetishization of machinery, its daunting level of detail—to their extreme. The series’ auteur, Hideo Kojima, decided to go in a different direction with Peace Walker: The series’ excesses have been mostly gutting out, leading a restrained, gameplay rich, overall tightest Metal Gear Solid experience in decade
It’s been ten years since the events of Metal Gear Solid 3, when a young Naked Snake killed his mentor to prevent a nuclear war. It still haunts him. Peace Walker starts with Snake, disillusioned with the American military, and building up his own private militia, Militaires Sans Frontière He’s asked to take a mission in Costa Rica. He refuses, until he’s told his old mentor might have a hand in it. Skeptical, but still haunted by the memory of her death, Naked Snake takes his private army to Costa Rica

The story is stripped down, told in rough—lined comic book style cutscenes, scrapping the realism, and the dense and confusing mythology the Metal Gear Solid series is infamous for. This stripped down feel carries over to the game and its mission structure. Going against the Metal Gear tradition again, the game isn’t one continuous adventure, but, instead, broken up into small missions, perfect for the morning commute.

The attention to smaller, polished levels is one of the game’s highlight While some entries in the series are too claustrophobic (Metal Gear Solid 2) or too wide open (Metal Gear Solid 3), Peace Walker gives the player a lot of space to maneuver in, while keeping the sense of danger intact. The jungle levels early in the game lend themselves easily to camouflage (by either you or your enemy), while later stages open up with multiple floors and angles of attack. If a mission is difficult, there’s usually another way to go around thing The game also allows you to rearrange your gear at the start of every mission, allowing even more option

This, coupled with the decision to get rid of the excruciatingly slow prone crawl, lends the game a brisk pace. It’s hardly a full on action game, but it does alleviates some of the tedium that comes with meticulously analyzing patrol pattern The controls take a bit of getting used to, but the game is accommodating, allowing for a different movement and camera scheme It’s telling that the brief flashes where the game becomes an action movie; the controls are smooth and manageable, rarely getting in the way. The Close Quarters Combat system, a confusing and unnecessary mess in Metal Gear Solid 3, is much more manageable and versatile here too.

But this is still a Metal Gear Solid game, and stealth is an important element. After each mission, a grade is displayed going off of how well you stayed hidden. The main reason to knock enemies out is to kidnap them for your own private militia via balloon. Ignoring the fact that this somehow works indoors, and that you’re hiring people who tried to kill you not five minutes before, it’s an engaging mechanic.

All of these kidnapped soldiers make up Outer Heaven, the metagame that’s played in between mission Each solider has stats, making the decision of where to put them pretty simple, but the challenge comes in managing long term need Have a lot of sick or wounded soldiers? Maybe shuffling some grunts to work the medical team is the best bet. Are you a few levels away from being able to research a new rocket launcher that can help in the next mission? Put some guys in R&D. Morale low? KP in the mess hall will fix that problem.

The game unfolds these elements gradually, never overwhelming the player with choice. Later in the game you can tend to captured vehicles, send a combat team to do some guerrilla attacks on bordering countries, and even, in a sly bit of foreshadowing, build your own Metal Gear.

You can even play as a member of your team during some of the Extra Ops, a series of missions outside the main storyline. Unlike the VR Missions in other games in the series, these missions tend to be directly related to the game’s campaign. For example, in one section of the map there’s a blocked entrance. One of the Extra Ops is to C4 the blockage, making it accessible during future missions in the same area. Another has you defending the base from attack while Snake sneaks into an enemy base. They add a breather in between missions, and allow you the time to research and grab more soldiers in preparation for especially tough mission

While all of these elements coalesce to what amounts to the purest form of the Metal Gear Solid series, the best element is the co-op. Almost every mission in the game is playable with another player, some as many as 3 other Having another gun by your side can be really useful, especially on the really difficult boss battles, but the developers included several co-op friendly mechanics to heighten the experience. The infamous box now allows fits two people (an advance in box technology, as one character says). Being in close proximity gives shared health, a move that discourages straying too far. The more you play with somebody, the more your camaraderie rank goes up, leading to more bonuses and perk The only superfluous element are the comm commands which allow you to give orders in game, with potential bonuses, but it’s cumbersome to execute in the heat of battle, especially when you can just shout at the person next to you.

The deathmatch options are also pretty rich. The levels, as mentioned before, allow for some great hide and seek gameplay, and while the game’s AI is pretty advanced, flushing out the player with grenades and coordinating attacks, there’s nothing quite like playing another person. Team Deathmatch is even better, allowing for complex planning. There’s no death more humiliating than being knocked unconscious, only to be lifted by a giant balloon—a fate worse than death.

There’s an intense mission late in the game that involves a large mining pit. Ducking between cover, you’re tasked with taking down a small army armed with rocket launchers and sniper rifle It’s a large, bold set piece, simple in concept, but rich in variety and scope.  Previous games in the series were content with showing grand action spectacles, but Kojima and company have gone back to basics here, letting the player live through that experience, instead of simply watching it.