What I’m about to say may shock you, but Metroid Prime: Federation Force is the best FPS for the Nintendo 3DS, and perhaps one of my favourite FPSs of all time. If you’re a fan of the Metroid series, there is plenty to see, including Samus, who shows up in various cutscenes. If you’re not, you’re still in for a treat, especially if you have friends to play with.

Anyone who has read anything about this game knows that many fans of the series weren’t happy with its announcement, as they had anticipated that Nintendo would reveal a new “proper” Metroid platformer of the sort that they had been dreaming of. After the announcement, there was mass down-voting of trailers, with people complaining that the game was ugly and that they hated the chibi art style.There was even a petition to get the game canceled. Were those people justified in their concerns and behaviors?

Absolutely not. If you’ve played the Metroid Prime games on the Wii or Wii U, this game fits alongside them nicely as a spinoff. The controls are similar, as are the feel and tone of the game although it unfolds in mission format instead of allowing free-roaming – and you’ll come across many familiar enemies. It feels like a proper Metroid game and not just some cash-in of the IP.

The story centers around the Federation Force, a team of elite marines in mech suits that are out on some routine missions when they come across space pirates. As bounty hunter Samus Aran hates space pirates, she gets involved and helps investigate what the no-good baddies are up to. Throughout the game, you’re essentially doing tasks that Samus herself can’t do or things based on information she provides on her journey. You see her in many cutscenes, as she is certainly one of the main characters of the game, even if you don’t play as her.

While the story isn’t the strongest, the real meat of the game lies in the actual gameplay. One to four players can tackle missions side by side, either online with strangers or locally with friends. Nearly every mission feels unique, adding a new gameplay element or new enemy to conquer, including some gigantic bosses.

Most of the game consists of solving puzzles, brawling with enemies, and conducting some platforming, all of which feels polished and enjoyable. Puzzles can range from shooting balls through courses into holes like some kind of multiplayer mini golf to more simple things like finding a hidden switch or shooting a certain area with a charged blast.

Platforming feels fantastic thanks to a well thought out jumping mechanic and a jetpack that lasts just long enough to make many of the jumps, though none of them are particularly hard. If you do end up falling, you’ll only take some damage instead of dying, so no worries there. 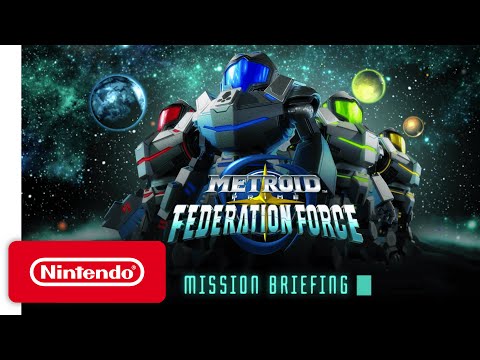 Combat is a blast, though it can take some getting used to thanks to the controls. Those playing on the original line of 3DS family will be moving forward and backward with the left stick, while using a shoulder button to lock-on and allow aiming via tilting the 3DS, which feels much like the aiming in Splatoon that many players prefer. Personally, I preferred the second option, which is available for those with a circle pad pro attachment or the NEW 3DS with its nub, which has controls much more like those of a traditional FPS, meaning the left stick is movement and the right stick is your aim. This mode also sets your shoulder buttons to jump and shoot, meaning you never have to take your thumbs off the sticks unless you’re using an item.

When selecting a mission, there are a few things you must set up prior to heading out. First off, you’ve got to select which mods you’re going to take along with you, of which you can carry up to three eventually. Mods are equipable items that buff your weapons or other items, and that can also do things like give you an extra life. If you’re playing solo, there is essentially a ‘must use’ mod that gives you double impact on your shots and reduces f the damage you take from enemies by half. When playing solo I used this, and I never felt like the game was too easy or too hard, but just right. Mods are hidden throughout levels behind breakable doors and other out of the way areas. Seeking them out and finding them is very rewarding, and I loved exploring every nook and cranny to find them.

After selecting mods, you’ll have to select a loadout of predetermined items for each mission. These items can range from health packs, to missiles or other weapons, to support items that shield you and your partners or help take down enemies. As you progress through the game, you’ll be granted the ability to carry more equipment over time, but at the start, you can only take a few things. Each item has a different weight, so you can only take a limited number. This works out nicely in multiplayer, as it forces players to decide what role they are going to play, though it never feels like you’re only supporting, as a majority of your damage is still going to be done with blasters, aside from during boss battles.

This game is chock full of content. One playthrough took me around 11 hours, though I mostly played solo aside from two missions out of the over 20 available. After completing the game, you can play the levels in hard mode. Each stage and difficulty has its own set of medals to unlock at the end of each mission. Medals are awarded for completing the level with high scores. Each mission has a bonus objective and par time to complete that, in my experience, are required to get all the medals. While this adds tons of replay value, I do wish there were an in-game timer and a way to know the required time and score before entering the levels. Unlocking medals earns you the other mod slots, as well as skins for your mech to prance around in. Those with the ability to scan in amiibos can unlock both a Samus and Zero Suit skin, as well as in-mission perks.

On top of all that is the Rocket League like Blast Ball mode, which pits two teams of three against each other shooting a ball and attempting to blast it into the other team’s goal. This mode has its own set of unlockables and skins, with additional amiibo skins available based on Super Mario Bros. characters. Those that played the free demo available from the eShop can import their stats and unlocks, meaning you don’t have to grind to get that sweet Ridley skin again!

The graphics have been a big point of contention for many people, but they just don’t do well in blown up screenshots. Yes, the 3DS is aging and its graphics show that, but the chibi style looks great on the 3DS screen. Levels looklike they would easily feel at home in the core Prime games, and chibi enemies and bosses look great too.

The soundtrack plays like a combination of those from the Metroid games that came before it with a hint of Star Wars thrown in, so if you’re the kind that doesn’t play with your system muted (shame on you) then you’re in for a treat.

Those concerned that it won’t feel like a ‘proper Metroid’, fret not, as it very much does. If playing solo, you’ll still have those feelings of wonder, loneliness, and exploration, though the levels are linear and you’re selecting them from a menu. I enjoyed the game quite a lot playing solo, but the game is best when playing with others, as you’re able to multitask a lot more for some of the more difficult later stages.

If I had to choose one thing that I didn’t love, it is the controls. They take a lot of getting used to, and I never quite found them all that perfect.  The nub on the NEW 3DS is great for things like panning a camera in Monster Hunter, but for precise aim it left a bit to be desired, even if I preferred it over the alternative. Another negative is that a couple of bosses are bullet sponges, but I’ve experienced far, far worse.

I had high hopes for Metroid Prime: Federation Force and it 100 percent delivered and then some. It might not have the best story, but the gameplay is unmatched when it comes to mobile FPS, making it a must-own title for the 3DS. Those looking for a great cooperative multiplayer experience that is more than just killing bad guys will be quite satisfied. Heck, even if you’re going in solo, you’re going to have a great time with the plethora of content. Easily one of the best games released for the 3DS, and certainly one of the better Metroid titles.

Final Thoughts
Metroid Prime: Federation Force is not only the best FPS on the 3DS, but perhaps one of my favorite FPS games ever.
REVIEW SCORE
9.5
File Under: FPS, Metroid, Multiplayer, Nintendo 3DS