I grew up playing the likes of River City Ransom, Double Dragon, Battletoads, TMNT, and the Final Fight series, and I’ve gotten my hands on about every beat’em up imaginable since then. I love the genre and feel like it still has a lot to offer with a few modern day twists. 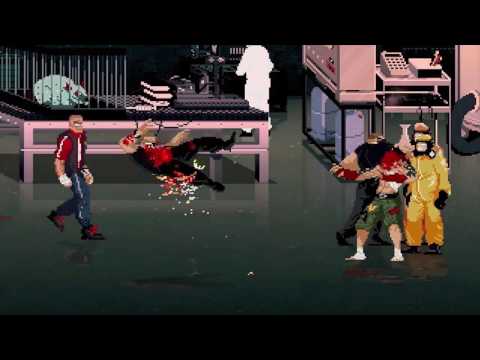 You play as one of four gypsy characters in 1980’s Russia. The government raids your camp and takes you to a lab hidden underneath a prison where experiments are conducted. There you become addicted to Nekro, a drug used and referenced throughout the game. Upon escaping, you set out to get revenge, killing anyone that stands in your path along the way. You also have to deal with hallucinations due to your drug addiction—which are quite gory and gruesome—and are honestly the best parts of the game even if they feel ripped right out of Splatterhouse.

Strangely, even though Mother Russia Bleeds is set in Russia, little is presented that feels all that Russian. The dialogue is all written in plain English with no dialect to be found, and aside from a few background images and one fight with a bear, you’d be hard pressed to believe this is Russia.

One of the main mechanics featured in Mother Russia Bleeds is abusing a drug to either regain health or boost your stats momentarily. You’re able to carry three hits at a time and can extract more of the drug from fallen enemies for a brief period after they die which is a must if you plan on living as you’ll constantly need to heal yourself. Playing with up to four players allows you to heal and revive each other, making the trip a bit easier.

The actual combat in Mother Russia Bleeds is fast paced and decent, all things considered. Each of the four characters has different stats but control mostly the same. You’re able to punch, kick, grab, throw, headbutt, tackle, and mount your opponents, as well as take them out with guns and melee weapons. Kills are always brutal and graphic, with enemies’ faces getting punched in, their teeth knocked out, and other bloody injuries.

The tutorial only teaches you the very basics of playing the game, leaving out all the elements that are unique to Mother Russia Bleeds. I had no idea you could heal yourself until halfway through the game, nor did I know I could have an AI sidekick or double to do running attacks. This was all valuable information I wish I had been provided instead of being taught the moves seen in most every game in the genre.

The only thing more shocking than the violence and nudity in Mother Russia Bleeds is the number of glitches I experienced along the way, such as clipping through walls, getting stuck on the environment, and enemies or bosses becoming stuck off the screen which prevented me from advancing.  When these glitches happen the only option is to reset to the most recent checkpoint, which sometimes means doing large sections of levels again. Checkpoints themselves are poorly placed, especially around boss fights. I’d often have to skip repetitive dialogue or do a small task before entering the fight, instead of just starting at the boss fight and skipping all the tedious stuff.

The boss fights are not fun and usually have to be cheesed to finish. I couldn’t tell if cheesing the boss fights was the intended way to complete them, but that is what it took for me. One of the earlier bosses has a gun and shoots you from afar, so you’re forced to run circles around him and shoot him with a gun provided just before you encounter him. Meanwhile, a sniper dot traces the ground, and can shoot you whenever you’re close to it even if it isn’t over your character at all. Another fight had me essentially stunlocking a character by throwing enemies at them, then mounting them and punching them over and over. Otherwise I was attacked the moment I attempted to approach him. The final boss fight consists of three forms and required me to stockpile weapons that enemies had dropped during the first section of the fight or I would die relatively quickly.

Basically, boss fights are poorly balanced and unnecessarily difficult. That said, there are three different difficulties to play on, so perhaps easy mode would feel a bit fairer. Speaking of fair, characters with guns can shoot you moments after coming on the screen, which makes for plenty of cheap deaths, since guns do the most damage of any weapon.

While there are some nice moments, Mother Russia Bleeds does little to offer anything all that new to the genre aside from being edgy, with game-breaking glitches on top of that. I wanted to love this game, I truly did, but I couldn’t help but feel angry and let down after playing it.  If the developers had spent a bit more time polishing and refining the game it could have been great. Perhaps the PS4 release later this year can fix many of the game’s issues, but as it is, Mother Russia Bleeds doesn’t do enough to stand out from the classics.

Mother Russia Bleeds brings drug use, killing animals and women, and loads of gore to the beat'em up genre, but lacks originality and is riddled with bugs.
REVIEW SCORE
5
File Under: Devolver Digital