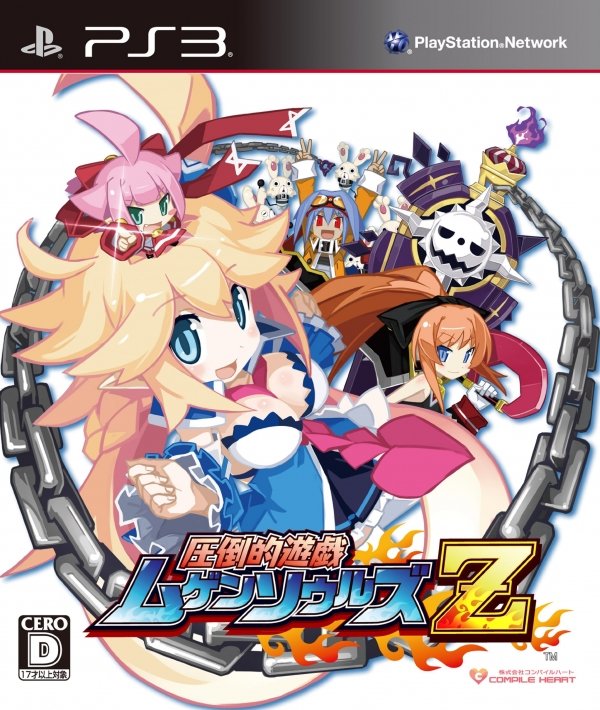 Miniature gods, bouncing breasts, a space-ship robot and a whole lot of coffins.

When first popping Mugen Souls Z into the PlayStation 3, these images flood the grandiose opening that could make even an adrenaline junkie cower in fear. Unfortunately, this fast-paced introduction in no way represents the actions to come as MGZ eventually becomes a slow game that only hardcore fans of the JRPG genre can enjoy.

Grinding is a trivial yet interesting concept that almost always depends on its players. The grind in Pokemon is loved by many but also scorned by others. It’s repetitive, but contains an addiction that has spanned over a decade. Yet the love for Pokemon doesn’t always rest in the addition of new creatures. Much of what people loved about the newest addition were its fresh mechanics that amplified the customization of your Poke team. This is unfortunately something that Mugen Souls Z doesn’t understand. While new features are present to improve on the last title, many of them do nothing to progress the sequel forward and leave the game to rely on its host of collectables and 9,999 level cap. Mugen Souls Z may think it’s the ultimate grind-fest, but unfortunately its long campaign only rewards so much. Luckily, it still retains enough interesting elements from the first title to be worth a pick-up for the hardcore.

Similar to many NISA titles, the characters are whacky and because of this, more interesting. Chou-Chou, the self-proclaimed Undisputed Goddess, is taking over more worlds and eventually finds herself in a rut when she’s turned into a miniature version of herself by a magical coffin. The focus then turns to the coffin’s owner Syrma who has just awaken from a deep slumber and is not surprisingly an Ultimate Goddess herself. In order to restore Chou-Chou to her original form players have to find the other Ultimate Goddesses-who bestow new abilities on the player, like jumping and swimming.

A fun plot right? It might have been enjoyable if it wasn’t told through really boring static cutscenes. These interactions show off the characters’ anime portraits, similar to that of Persona 4: Arena, and if many of you remember Persona 4: Arena’s story, the visual novel style could get a little boring at times. The difference is that P4A broke up its dialogue constantly with fights. Mugen Souls Z, while not terrible in its execution, fails to keep the player interested enough to mull through the frequent and tiresome campaign. A sex joke here, a cheesy love triangle over there; it’s all very frustrating and does nothing to push the story forward.

Despite this, the grinding elements and mini-games give MGZ some much-needed identity, most notably the G-Castle (Chou-Chou’s ship) turning into a giant robot (reminiscent of every Megazord in Power Rangers). Players acquire parts for the G-Castle’s battles, which end up working much like rock-paper-scissors matches. It’s a good detour from the grind-fest that makes up most of the title, but grinding itself is enjoyable. The turn-based combat works much like Hyperdimension Neptunia, allowing movement within a circle as well as power-ups and power-downs to disrupt the monotonous flow of fighting. Gameplay get more complicated as things go on including the Fetish Pose capture method which has players doing different poses with Syrma to try to collect different Shampurus (cute bunny-like creatures). This all can seem overwhelming, but the constant tutorials help explain things for newcomers, despite the game being aimed at fans of the previous effort, Mugen Souls.

Beyond that is all the post-game content to accomplish, giving hundreds of hours to those willing to put the time in. It’s important to note though that after a while, battles do become pretty standard, and the rewards begin dwindling once a certain level is reached. But for those looking to grind all the way to level 9,999, I wish you all the best.

Yes, there’s a lot of provocative fan-service but it doesn’t ruin the game like Conception II or Senran Kagura. The complete self-awareness and hilarity of some of the dialogue keep it from too many cringe-worthy dilemmas, making it perfect for the JRPG hardcore crowd.

Unfortunately, there is a problem with the way the types are explained in Mugen Souls Z. Instead of elements, players are given types such as bi-polar and sadist instead of water, fire and others. While a new way of explaining types is fresh, there is nothing to distinguish each type at first, and nothing would have changed if the elemental system had been used. Perhaps in the next release this sort of change can be more effective and play a bigger role in shaping the Mugen Souls franchise.

Mugen Souls Z isn’t a horrible game. It has its share of problems and fails to leave a lasting impression but the rich hardcore gameplay is present and waiting to be conquered. The weak story and clear lack of mainstream appeal make it hard to recommend to everyone, but those who love grinding have probably picked this one up already. Just don’t be surprised if reaching that 9,999 summit takes a couple weeks out of your life.

When first popping Mugen Souls Z into the PlayStation 3, these images flood the grandiose opening that could make even an adrenaline junkie cower in fear.
REVIEW SCORE
6
File Under: Compile Heart, NIS America, PlayStation, RPG