Scott Pilgrim Vs. The World: The Game (PS3) Review 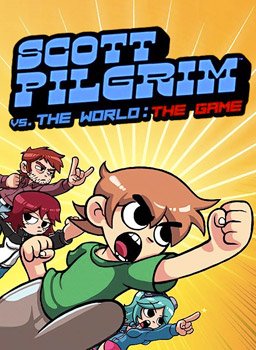 In gaming, it’s usually only when a game’s setting is in New York that some players can claim a game takes place in their neighbourhood. In a first for games, inhabitants of Toronto can now make that same claim, especially for those that live in a part of the city known as The Annex. Thanks to Scott Pilgrim V The World: The Game I can now say that I’ve beaten up hipsters to a senseless pulp in my own ‘hood and even got run over by a Toronto Transit Commission bu That may not make for a masterpiece of gaming, but it sure is a good time.

While Scott Pilgrim has been released to coincide with the new movie (starring Brampton, Ontario local, Michael Cera, as Scott Pilgrim himself) the look and feel of the game has far more in common with the original source material, the comic series by Bryan Lee O’Malley. As with both works, the common plot is that Scott Pilgrim, a Gen-Y Slacker, is desperately trying to date Ramona Flowers, an Amazon delivery girl. In order to do this, he must defeat Ramona’s seven evil ex-boyfriend As to be expected from a comic that takes its structure from video games, this translates effortlessly back into video game form. Due to the short, non-voiced nature of the cut-scenes however, players without any familiarity with the comic may find the interludes at best confusing and at worst downright incomprehensible. It’s assumed by the game that if you’re playing this, you know the story and don’t require elaboration.

The art direction of the game is knowingly, unapologetically retro, with a 16-bit look reminiscent of the 90’s arcade scene and consoles such as the Genesis and Super Nintendo. Colors are bright, and the backgrounds have a surprising amount of authenticity for the city of Toronto, with little details such as the circular bike racks and seating in streetcars nailed down accurately, if stylistically. Scott and friends are rendered in a slightly more super-deformed style than the actual comic, but still retain a Japanese inspired, manga-esque consistent with the fact that the game is an old school, Japanese brawler.

Audio stretches back even further than the 16 bit look of the game to the 8 bit era of the Nintendo Entertainment System with a track provided by Anamanaguchi. The band has earned a reputation for producing sound through a hacked NES and GameBoy while layering on regular instruments on top of that, and it works beautifully with the simpler sound effects of Scott Pilgrim. Older gamers will also recognize many audio sound effects from classic games such as Super Mario Bro and Sonic The Hedgehog. In other words, Scott Pilgrim, true to its retro-game roots, is itself masquerading as a retro-game.

Scott Pilgrim is essentially River City Ransom updated for the 21st century. The brutal, often merciless mechanics of old school brawlers have been meticulously recreated for a gaming experience at odds with its presentation. While it looks and sounds light and fluffy, the actual game itself will slaughter those who are unprepared, as did many games of the late 80s and 90 In this regard, the game is not necessarily for everyone as contemporary gamers will likely find themselves surprised and overwhelmed by the steep difficulty curve of the game. Older gamers that still remember the brutal difficulty levels of older games will find a certain cruel familiarity with the experience, and seasoned retro-gamers will also be right at home. Others however may find even the easiest setting of the game to be too difficult for the sort of interactive experiences they are accustomed to today. There’s no hand-holding in Scott Pilgrim, it will take the uninitiated, chew them up and spit them out.

As with River City Ransom, there are RPG-lite elements to add depth to a game that is essentially “run from left to right while beating the hell out of everything that gets in your way.” So loving is the homage to RCR that even features such as “under the bridge secret shop” that includes the game’s best stat boosting items has been recreated. This can mitigate the difficulty for the patient as traditional RPG staples like “grinding”—in this case for money—can eventually lead to players maxing out their skills and learning new, devastating move The bizarre physics of RCR also make a return, with players able to hit or kick objects with the potential for endless rebounding between point This also means players can team up on enemies to juggle them infinitely if the timing is right, simply punching or kicking a foe back and forth between them as long as they can maintain a rhythm. It opens up some unique opportunities for strategic yet comic combat that carries over even into boss fight

And make no mistake, this game is a multi-player game. Whether you’re playing alone or with a full crew, the game seems to never increase the amount of enemies it throws at you, so what was once insurmountable as a solo effort becomes much more manageable with more friends to help you. There are even co-op attacks if all players manage to initiate a taunt at the same time, where Scott and friends break into band mode for a musical super-attack. With all this emphasis on co-op play, it makes certain design decisions about the game all the more bizarre. In what is probably a mixture of old school authenticity and scheduling problems, Scott Pilgrim can allow for one to four players in a co-op mode that is strictly local and has no drop-in/drop-out gameplay. While the game is best enjoyed with as many people as possible, expecting a house-hold to have four controllers is a bit of a stretch, and not allowing new people to join unless the current session quits out is—while authentic to the old school console experience—a major inconvenience. There are also reports of instability. Over the course of the review, the game froze twice, necessitating a complete restart of the system, but others have cited more frequent occurrence

Scott Pilgrim v The World: The Game is a solid, entertaining game with that is guaranteed to appeal to a specific audience. That audience is retro-gamers, older gamers of the NES era, and fans of Scott Pilgrim who are actually good at video game For everyone else, the difficulty may be an issue, and for gamers used to a world with connected to the internet, the unforgiving nature of the game combined with the lack of online play may be deal breaker But if you’re one of the demographics mentioned above, this is one the more pleasant surprises of the summer and well worth your time.

Scott Pilgrim vs. The World: The Game is a solid, entertaining game with that is guaranteed to appeal to a specific audience.
REVIEW SCORE
8
File Under: Action, PlayStation, side scrolling