The Hype Train Pulls In 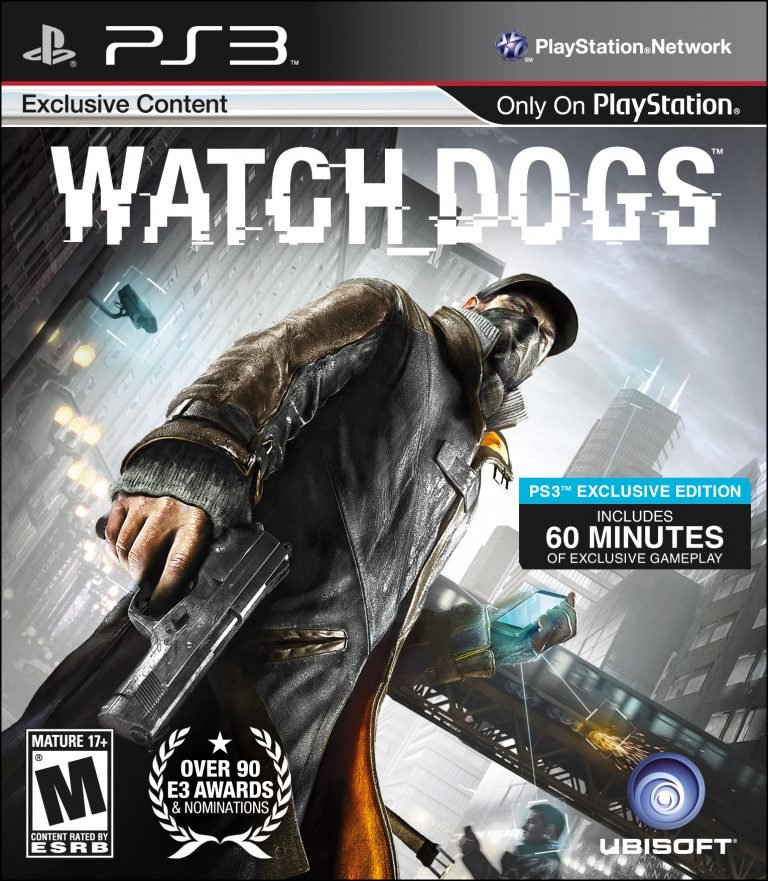 When Ubisoft debuted a PC demo of Watch Dogs to the world in 2012, they failed to name the platforms the game would be arriving on, but everyone thought the sumptuous visuals screamed “next generation.” Over the years the game became synonymous with what people expected from a next-gen title despite no one getting any extensive time with it. There was also a bit of deflating expectation in the run up to launch as new gameplay trailers revealed a downgrade—at least for consoles—in visuals compared to that stunning 2012 debut. Now, like Titanfall, the game is here, ready to wipe away the curtain of hype and expectation in exchange for a real game. The final result, like Titanfall, is a game that may have been saddled with too much expectation; this is a very good game, but it may not be an all-time great game.

Chicago had a rocky history in the 20th century as a hive of organized criminal activity. Now, in the 21st century, Watch Dogs proposes a Chicago under the thumb of a pervasive, seriously invasive central operating and surveillance system that does everything from control traffic lights to recording any and all web cam activity. And yes, gangsters are still involved, but we get a bit of 21st century “gangsta” to go along with our old school mob shenanigans. The main character, Aiden Pearce, is a tough, no nonsense guy that can hack as well as he can drive as well as he can shoot, and he just has one rule; don’t mess with his family. As luck would have it, that’s exactly what happens, and so he goes on a crusade/rampage for justice and family safety across a battlefield that is all of Chicago.

“if you’re looking for something to dethrone GTA V or scream “Next generation gaming has arrived,” this isn’t it.”

Unlike most action games, there’s a pretty elaborate—even thematic—story in Watch Dogs, one that asks a lot of questions about revenge, justice, and most importantly, society’s willingness to give up privacy for security and convenience. Aiden is, ostensibly, the “good guy” here, cracking skulls for the best of reasons; protecting a family, but at the player’s discretion he can wreak a lot of havoc. As Aiden, players can read cellular text messages, e-mails, eavesdrop on phone calls, siphon money from bank accounts and even peer into web/game console cams to watch people do everything from play dancing games to recording their sexual exploits.

It’s an interesting conflict of play versus story; Watch Dogs the narrative wants to outrage players with how pervasive surveillance is in modern Western society. Watch Dogs the game wants you to cheat, sneak and peek at every person, network and camera in sight. As to be expected from an Ubisoft game, this is hardly a straightforward tale, with a lot of grey, rather than black and white moral statements. Also like an Ubisoft game, it tends to throw in a lot of plot elements that can make the story feel more lumbering than it actually needs to be. If you didn’t like the way the Assassin’s Creed series had multiple plotlines that felt only tenuously connected, you’ll probably feel similarly about Watch Dogs’ story. On the other hand, as bloated as it feels, at least it’s told competently.

The technical side of things is where the game gets a bit tricky. Make no mistake, this isn’t as deceptive Sony’s reveal of Killzone II which tried to pass off pre-rendered CG sequences as actual game play. The visual difference isn’t even as great as that of Aliens: Colonial Marines and the infamous downgrade in both visuals and gameplay that game received. It is, however, a step down from that 2012 E3 reveal that was demonstrated on a maxed out, gaming PC with all cylinders firing. The PS4 version performs solidly, with steady frame rates, no screen tearing, good lighting, realistic water and other accents that are expected from a next-gen title. Unfortunately it’s already been overshadowed by its early reveal and dedicated console exclusives like Infamous: Second Son. Draw distances have improved from last-gen titles, but it’s still noticeable, and the cross-generation nature of the game limits the scope of just how far the game could push its graphics.

It should come as no surprise to anyone that since Ubisoft is the steward of the Assassin’s Creed series, much of that franchise’s DNA has been bred into Watch Dogs. A large city is your playground, filled with NPCs to use and abuse, but instead of elaborate parkour obstacle courses, assassin agility has been replaced by aggressive hacking. Aiden might not be able to scale to the top of a church tower, but he knows the annual income of every person on the street and can steal some of that without even touching them. He can also drive like no one’s business, and he’s mastered the art of cover-based shooting. Watch Dogs is essentially one half Grand Theft Auto, one quarter Assassin’s Creed and one quarter unique hacking concepts. It seems like an unholy combination, but in practice it works quite well.

Driving and shooting mechanics have been quite well established in other games, particularly GTA, so these gameplay styles feel both familiar and competently executed. Even the default controls and buttons are the same. The various vehicles have enough distinctiveness that it feels different driving a sports car compared to a truck, and they respond well enough that racing has been incorporated as online activity. Combat has the usual suspects of assault rifle, shotgun and sniper rifle, but this is supplemented by some high tech accessories like communication jamming grenades and the ability to hack enemy explosives while they’re still on the utility belt.

“Watch_Dogs is essentially one half Grand Theft Auto, one quarter Assassin’s Creed and one quarter unique hacking concepts.”

And that’s the thing that makes Watch Dogs a different beast from most other games. There’s a thin layer of “hack everything” about the game which makes it pretty much a substitute for magic. The conceit that an entire city’s infrastructure—and even weapons—all run off one central operating system is the rationale Ubisoft has given for Aiden’s ability to sleaze into all major electronic systems except cash registers. It allows for spectacular car chases augmented by timely hacks of car barriers, raised bridges and even exploding steam pipes. For stealth, Aiden can cause  car alarms to go off, thus attracting enemy attention, or simply make a nearby power box turn into a shrapnel grenade.

Call it magic, psychic abilities or consummate hacking, but it adds a bit of novelty to these familiar game activities. It doesn’t make these mechanics feel totally new, but it opens a welcome sense of evil experimentation that feels bit like Tecmo Koei’s Deception series, where players sadistically wait for NPCs to walk over a trap and then spring it on them. It’s a lot of fun, but die-hard techies should take note, it’s hardly realistic. Hacking occurs largely through “line of sight” with Aiden hopping from one camera to the next until he finally finds one looking at the laptop/control box/lock he needs at which point he can access it. It doesn’t make much sense, but when it’s this enjoyable, it’s forgivable.

The only serious downside to Watch Dogs is that Chicago, at least as Ubisoft imagines it, is not quite the equal of Los Santos in Grand Theft Auto V. Chicago definitely has more detail graphically; sunsets look gorgeous and trash cans in an alley have impressively authentic looking garbage, but GTA wins in depth. You can watch an art film, or television, or go online on a fake internet, participate in yoga or jet ski racing, play the stock market or go to a strip club in GTA.

Watch Dogs lets you hack into things, and while that’s fun, feels limited compared to GTA V’s massive array of last-gen antics. Some GTA staples like gang wars and vehicular mayhem crop up as side-activities, but these few diversions (and a MASSIVE number of collectibles hidden throughout the city) once again feel closer to the focused world of Assassin’s Creed than Rockstar’s legendary franchise. There are also some bugs, notably with “trigger points” to advance missions to the next objective. A few times missions had to be restarted simply because they wouldn’t advance, but it never brought the game to a dead halt that called for a complete restart.

Finally, there is the multiplayer, and this is different from what the Call of Duty or even Uncharted crowd is expecting. This isn’t about throwing players into a map in order to shoot each other. Watch Dogs borrows a page from Dark Souls and allows players to invade each other’s games. Players can either race, hack or simply follow another player in cat and mouse games of predator and prey. It’s a unique take on competitive multiplayer, as defenders must try to locate the hacker and kill them, while the hackers must try to remain undetected—or at the very least, stay out of the way of bullets—until the job is done. It’s a fun, harrowing experience, but it’s also integrated into the main game. Anti-social types will either have to opt out through the menu (and have all associated multiplayer skills reset to zero) or simply pull the Ethernet cable out and not be online at all to avoid it.

Watch Dogs is full of good ideas, but none of them are great. What was initially revealed as a next-gen title that was going to change everything turns out to be a pretty fun, open world game with hacking as icing on a small GTA cake. The multiplayer is original, and the campaign is surprisingly long and full of variety, but it never quite impresses in the same way as Delsin Rowe hurtling through the air as a neon bolt of light in Infamous, or even just Michael De Santa trying to get his boat back in GTA V. Watch Dogs is still undoubtedly one of the best games you can play this summer, but if you’re looking for something to dethrone GTA V or scream “Next generation gaming has arrived,” this isn’t it.

Check out the CGM playing the first 20 minutes of Watch Dogs!

Watch Dogs is still undoubtedly one of the best games you can play this summer, but if you’re looking for something to dethrone GTA V or scream “Next generation gaming has arrived,” this isn’t it.
REVIEW SCORE
8
File Under: Action, Ubisoft, Watch Dogs