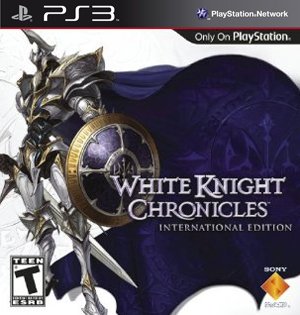 This generation of Japanese RPG fans has had a tough time of it. The sea of overwhelming choice in the PS2/Xbox/GameCube era has turned into a muddy watering hole with a handful of titles occasionally bubbling to the surface. This has put a lot of unfortunate pressure on White Knight Chronicles: International Edition. It’s the first PS3-exclusive JRPG actually to hit the console since its launch in 2006, and while it’s an enjoyable, solid game, it’s not a must-own title. Think of it as a minor oasis in the drought because while it tries to do a little bit of everything, it ends up feeling fragmented.

Level-5 has a consistent history of playing it safe with narrative From Dragon Quest VIII to Rogue Galaxy, the developer has walked well-trodden, clichéd paths with both plot and characters, and White Knight Chronicles: International Edition is no exception. There is the orphan with a special destiny, there is the princess in need of rescue, and there is a lesson about the power of friendship. It’s a veritable checklist of JRPG trope

The game centres on Leonard, a humble employee of a wine merchant, who is first tasked with delivering a shipment of wine to a dual celebration of a military truce and the princess’ birthday. An attack leaves the kingdom devastated, and the princess kidnapped. Leonard gets caught up in the chaos and takes control of an “Incorruptus,” essentially a variant on Ultraman and other Japanese Tokusatsu programs that involve people and/or teams transforming into a super mode to combat evil.

Yes, for all intents and purposes, Leonard is a Power Ranger. Probably the white one. From there, the game is afoot, with Leonard and friends exploring a surprisingly large fantasy world full of monsters, villains, exotic towns, and treasure chests tucked away in hard-to-reach place None of the plot developments will be even remotely surprising to anyone who’s played a JRPG in the last 20 year It’s enjoyable, just not original or all that well developed.

“On the presentation front, White Knight Chronicles: International Edition is a good but not beautiful game.”

On the presentation front, White Knight Chronicles: International Edition is a good but not beautiful game. The game was originally released in Japan in December of 2008, and over a year later, it fails to impres Gamers have already seen the likes of Uncharted 2: Among Thieves and Killzone 2 and know what a PS3 exclusive is capable of visually. White Knight Chronicles: International Edition doesn’t hit that mark. The characters are competently done, and the environments are large, detailed, and lush. Some truly inspired art design is scattered throughout the game, but it lacks the obvious technical muscle of higher profile exclusive

The audio is similarly competent but not accomplished. The music composition does a decent job of setting the mood, but there are no stand-out melodies as heard in some of the best JRPGs of the past such Final Fantasy X or Suikoden V. The voice acting is also good, with a surprise appearance by Nolan North, aka Nathan Drake of Uncharted fame. These performances are let down by a lack of proper lip-synching, as players occasionally see characters speak without their lips moving. It’s a recurring theme throughout that the visuals and audio are symptomatic of an entire game that could benefit from more polish.

The gameplay in White Knight Chronicles: International Edition is itself a curious mix. Players may be initially confused by a combat system very reminiscent of Massively Multi-player Online games such as World of Warcraft, right down to system messages, cool down periods, and a rudimentary hot-key system. The reason for this is that there are essentially two games here.

The single-player game lasts less than 30 hours, a surprisingly small game by JRPG standard But it is complemented by an online component in which players can take the character they’ve created for the story mode of the game and go on short quests with up to three other player Here is where combat starts to make more sense, as players trade blows with other players in a collection of small quests that range from 30 minutes to one hour in completion time, like a bite-sized MMO for people unwilling to commit to the thousands of hours normally required in that genre.

In this sense, there is actually a lot of value to the game. Players can spend hundreds of hours playing with others online, and old fans of Phantasy Star Online will find themselves right at home. There’s also a “Georama” component that allows players to create and customize their own hometown to either harvest resources for creating better items or simply have a “staging ground” from which friends can meet to go off questing together. It’s a return of the system first seen in Level-5’s earlier Dark Cloud series, adding just a dash of SimCity to the proceeding Each of these parts, the single player, the multi-player and Georama concepts are all interesting on their own but fail to gel together completely.

And this lack of cohesion is where White Knight Chronicles: International Edition disappoint There is much potential in this series – and a sequel is already in the works in Japan – but it needs to be better developed. The Georama aspect needs to be tied more closely to both multi-player and online.

The online component could benefit from more comprehensive design and interface choices seen in more accomplished MMO The single-player game needs to have its difficulty tweaked and combat mechanics refined. It’s a little on the easy side and suffers from hit detection problems, such as when your party is being attacked by a monster on the other side of a closed door, and the monster can score hits, but the party cannot.

Most importantly, the player-created character deserves increased relevance. The avatar may be an important team player when taken online, but in cut-scenes within the story, he or she simply stands about, largely ignored by the main characters that are busy getting on with the plot. It’s disappointing to see that such an impressive character creation system is wasted on a person that the main cast seem to resent and wish quietly would go away.

Despite all this, there is fun to be had in this game. It doesn’t actually fail at any one thing, but the promise of more fully developed mechanics is a constant tease to player This is not the great JRPG exclusive players were hoping for. People on a budget are probably better off waiting for Final Fantasy XIII to stomp through the wasteland of JRPGs, which is a much more polished affair. For people that want a game that can potentially last hundreds of hours, the online and questing components of White Knight Chronicles: International Edition will keep you busy for quite some time, and, like any good MMO, you might just make some friends while you’re at it.

For people that want a game that can potentially last hundreds of hours, the online and questing components of White Knight Chronicles: International Edition will keep you busy for quite some time.
REVIEW SCORE
8
File Under: Action, PlayStation, RPG, turn based strategy