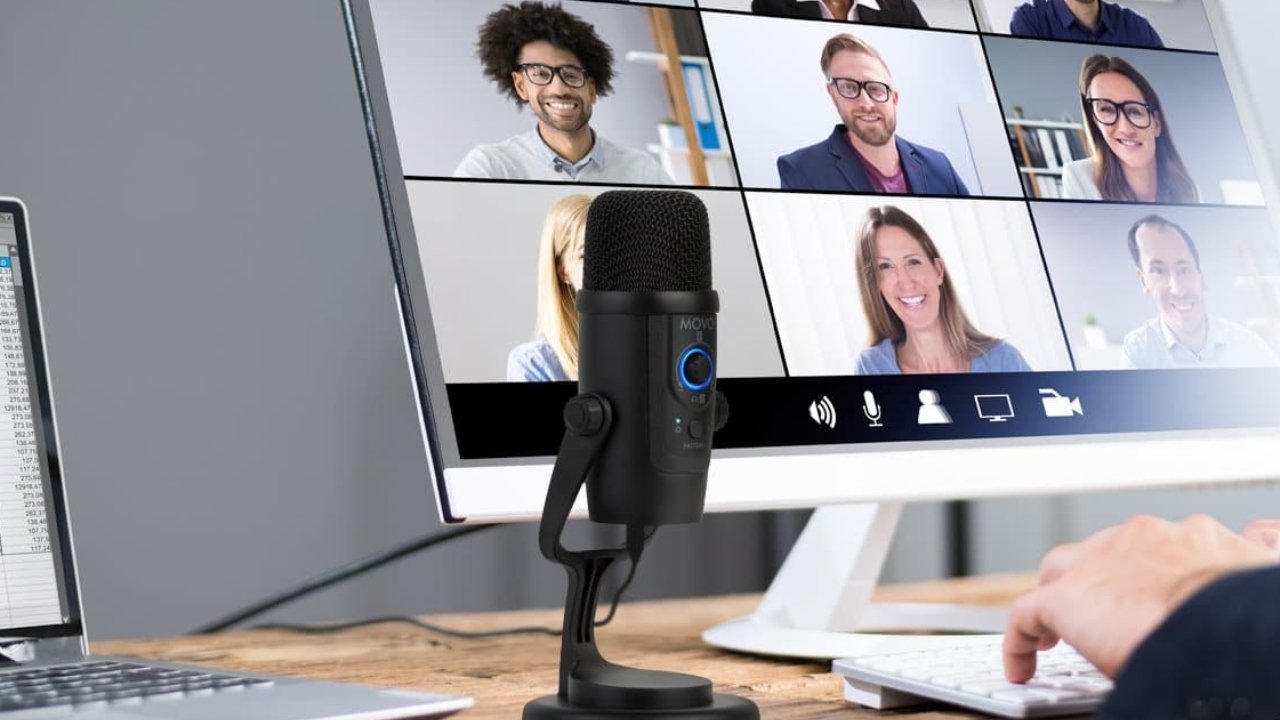 The people at Movo make microphones for all different situations. From teleconferencing to Vlogging and everything between, they offer a microphone for you. A small USB mic from the company came across my desk that was definitely worth a look. It’s the most compact and affordable of their UM series of mics, the UM300.

The UM300 has a three capsule condenser array with a 48 kHz sample rate and 16-bit depth. It also supports a frequency response of 20Hz-20kHz. In the box, you’ll find the microphone and stand, a USB-C to USB-C, and a USB-C to USB-A cable depending on how you wish to connect to the computer.

The bottom of the UM300 has a USB-C port for connecting to the PC, a headphone jack for zero latency monitoring and threads for mounting the mic directly on the mic arm (an adapter may be necessary depending on your mic arm). The layout is a little weird in that the threading is not in the centre of the mic, but slightly towards the back, making it sit a little off on the mic arm. The layout of the ports on the bottom of the mic in conjunction with the threading is a little tight, but manageable.

On the front of the microphone is a pressable knob for audio control. You can control the audio going to your headphones, press the knob in for two seconds to switch to gain control or a quick press of the knob will mute the mic. The LED indicator will change depending on what setting it is on (blue for headphones, purple for gain and red for mute). Under the knob is a button to switch between the mic’s two polar patterns, cardioid and omnidirectional.

The UM300 has that familiar look found in USB mics with no flashy RGB. Its overall shape presents really well on camera. It just looks like a professional mic setup. The only aesthetic issue I have with the mic is that the off-centre position of the mic thread makes it sit a little askew on a mic arm. In terms of the lighting around the knob, it is a nice colour and a great indicator of what mode you are in, but the long press feels like forever to switch to the gain.

“The UM300 has that familiar look found in USB mics with no flashy RGB. Its overall shape presents really well on camera.”

From a sound standpoint, the UM300 was a little inconsistent coming out of the box. I had a lot of issues with clipping initially, and I had to play a lot with the gain on the mic in conjunction with the controls on OBS to solve that issue. When I did, the mic sounded just fine. There was nothing spectacular about the vocal presence in the microphone, however. My usual complement of VSTs (Compression, EQ and Noise Gate) cleaned up the sound to my liking.

I gave each of the polar patterns a good listen and I found that the cardioid did not remove as much of the ambient noise in the room as I would like when compared to the omnidirectional pattern. The drop-off in the ambient sound was only a few dB, which is fairly small when eliminating the mic’s ability to pick up sound from all around it.

The UM300’s affordable price comes with a trade-off, which is essentially anything that can make a USB microphone special nowadays. While none of the things that you are losing are a dealbreaker, they are worth considering when making the decision about what mic you want.

The lack of RGB is likely fine for most people (as it should be, RGB is overrated), but the biggest loss for the UM300 is the access to software, which has become such a major tool for content creators that it makes the extra price incredibly worth it.

That affordable price, though, a very reasonable $59.95 USD, is a great entry-level price to get you going. The Movo’s quality is in line with microphones at a similar price point, so it really comes down to the overall aesthetic that you want for your stream, podcast or whatever content you are working on and, in my opinion, the UM300’s simple studio look makes it a fit for any scenario.

The Movo UM300 is a simple, yet classy microphone for an affordable price. If you aren’t seeking any bells and whistles, this would be a great addition to anyone’s setup.