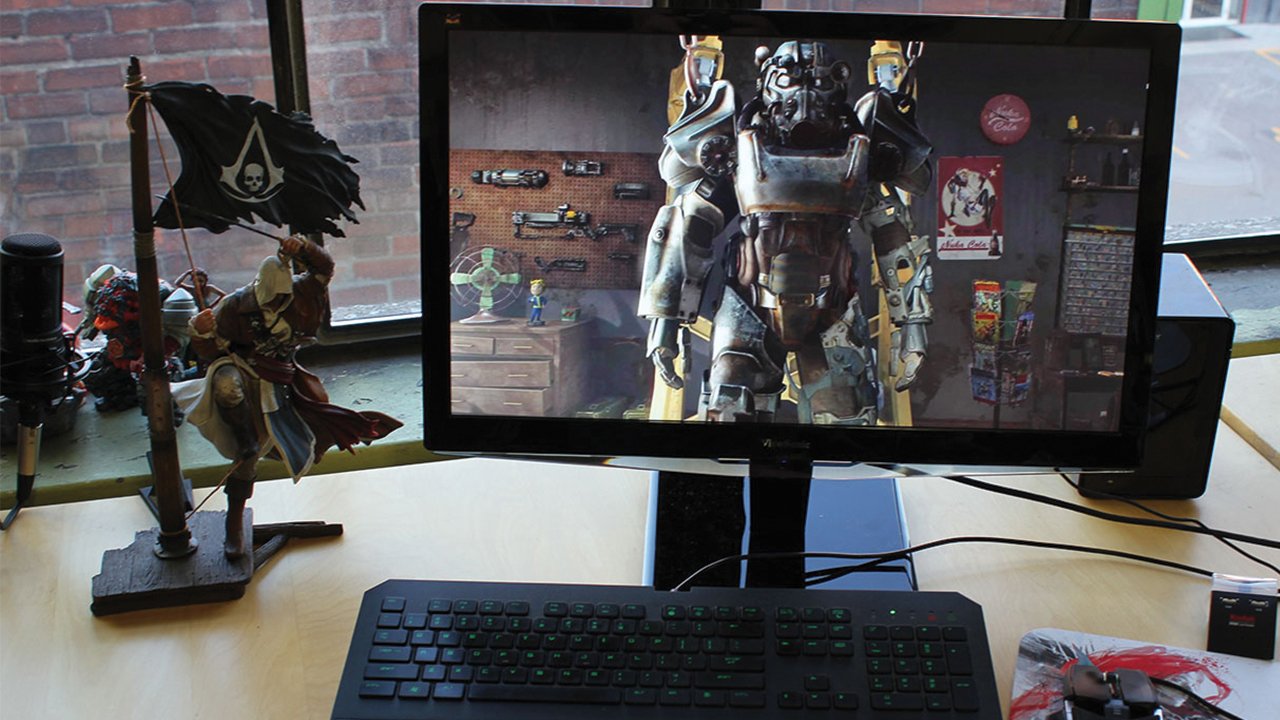 So, I’ve spent two weeks living with ViewSonic’s new(ish) 4K monitor, and there are really three things I’ve come to learn. The first is that most of the time, 2160p is just like 1080p. The second is that when it’s supported properly in games, 4K, even away from the blockbuster titles, is incredible. And the third is that the era of truly affordable mainstream 4K is upon us—though, sadly, the software support is still lagging behind. If I had to choose a fourth, it would be that The Witcher 3 at 4K is face-meltingly beautiful.

I’ve seen the future; it was shown to me on ViewSonic’s VX2475Smhl-4K. Others may disagree; they may say that the future of gaming is in VR. But whatever you believe, ViewSonic’s VX2475S is a huge step forward for 4K gaming. It’s not the best 4K monitor on offer, and it’s certainly not the most feature-rich, but what it does do is know its target market very well. My colourist roommate would find nothing of use here; at 24 inches, there’s not enough real estate for a proper video editing suite, and without industry-mandated blacks and whites, it’s not fooling anyone in film and television work. Nope, this one’s all for us gamers. And you know what? I like that.

Look, I play Counter-Strike a lot, so I appreciate high-framerate, low-latency monitors, but most people aren’t and don’t. Sure, you’re not going to get more than 60Hz out of it (believe me, I tried), but this baby will offer you 60 on-the-nose, and sports HDMI 2.0 and DisplayPort 1.2a—a nice bit of future-proofing, if you ask me. Oh, and that MHL in the name? That’s no coincidence; one of the HDMI ports is MHL enabled, allowing your MHL-capable devices to draw from it. Slick.

The display itself is a PLS panel—basically, a more affordable alternative to IPS with similar performance, if a few issues with gamma shifts (it’ll still mop the floor with a TN when it comes to gaming, though). I really can’t find anything to say about it, if I’m honest. Great viewing angle, holds its own against glare, the colour could be a touch more vibrant but I’m sure some more tweaking in my GPU settings could remedy that, and I was quite surprised with how well it handled frame ghosting. It performed so well, in fact, that it really illustrated how much my current 1080p primary is lacking, even though it’s only a year old.

Other goodies? It boasts 22 degrees of positive tilt, 5 of negative, though at the cost of no height or swivel control. It’s VESA (100×100) mountable for those of you who are looking to use it in an array, and it comes with its own 4ft HDMI cable in the box—a very generous and welcomed extra.

Things I wasn’t crazy about? The bottom detailing lip is super fragile (and also the first thing you’ll be inclined to grab when trying to pull it out of the box); I can definitely see it breaking with ease. That lack of swivel isn’t by any means a deal breaker, but it can be frustrating for some. And the protective film that comes on the bezel left the whole damn thing so statically charged that it’s now strategically camouflaged with dust that clings and builds up every couple of days. All very minor complaints, and nothing to do with the panel itself. In truth, it could be housed in a cardboard frame for all I care; it really is a great panel for the price point.

Not only does it offer everything I would want in my day-to-day from a monitor, but the VX2475S is one of the first real 4K offerings to come in at a price point lower than the GPU required to power it. If you’re like me and have been waiting for more reasonable prices before breaking into 4K gaming, this might just be what you’re after. And having finished my review and packed the panel back up, I’ll say for sure that the move up to 4K wasn’t immediately world-shattering, but the step back down to 1080p most definitely was.

There is a word of warning I must offer, though, and this has nothing to do with the monitor itself. Software support for 4K is woefully lacking. Multi-monitor setups of different native resolutions have always been a problem, and with the frustrating number of games that either don’t properly support 4K, or have UI issues at high resolutions (even the Steam overlay is hopeless at 4K), downscaling to 1440p or 1080p will sometimes be required. You’ll quickly realize, though, that—because of the way Windows handles native desktop resolutions compared to in-game resolutions—if you do this, whatever you had on your second monitor will be pushed off by what occupies the rest of your desktop space on your primary monitor. It’s not the end of the world, and you’ll never notice it on a single-monitor setup, but if you keep a browser or streaming utilities on your second monitor, as I do, it can be frustrating. None of that is any fault of the monitor, but with the industry divided on whether 4K or VR is the way forward, it could be some time before we see a fix that isn’t just a hack-job workaround.

Not only does it offer everything I would want in my day-to-day from a monitor, but the VX2475S is one of the first real 4K offerings to come in at a price point lower than the GPU required to power it.