Time to Look Back 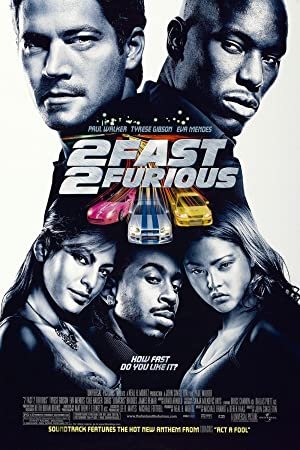 I’ve managed to go a long time without having seen The Fast and the Furious series of films, and frankly, I could have gone the rest of my life without seeing them and not have missed much. Anyone who’s read my review of Cars already knows my feelings on the issue of car racing, to say nothing of the subgroup of illegal street racing. So with the impending release of the third instalment in this surprisingly profitable franchise, I decided to take the plunge and visit the house that Diesel built.

In many ways, The Fast and The Furious harken back to the kind of films we don’t see a lot of anymore, the type of movie that used to be played at the drive-in as part of a double feature. Simple films that don’t rely on heavy plot or exposition but could be enjoyed simply for the good-looking cars and good-looking people. So this is where I say that I enjoyed The Fast and The Furious much more than I expected, but then again, I didn’t expect to enjoy them at all.

In part one, we meet Brian (Paul Walker), a kid from Arizona hoping to get in on the lucrative, underground street racing scene in LA. He finds a mentor in Dominic (Vin Diesel) and a love interest in Dominic’s sister Mia (Jordana Brewster). Brian has a secret, though: he’s really working undercover for the LAPD, out to bust a ring of thieves jacking cargo from 18-wheelers while they’re still on the highway. It could be Dominic’s crew, but there’s an equal chance that it’s a rival gang led by Johnny Tran (Rick Yune).

The first Furious is easily the weakest of the duo; it always seemed very unfocused as to what exactly it wanted to be. Is it about car racing? The investigation of the crimes? Maybe, it’s just a tale about working-class youth in Southern California and their fascination with cars?

The truth is 2 Fast 2 Furious is all these things at one time or another; the plot moves along like someone shuffling a deck of cards. On this hand, Brian is caught between his loyalty to Dominic and his duty as a cop, and on the next hand, finds Dominic’s mechanic getting in too deep after betting his father’s car on a race. I blame director Rob Cohen for this because a solid filmmaker with some copious editing could have solved a lot of these problems.

It doesn’t help that all the supporting characters in 2 Fast 2 Furious are much more interesting than the man that the plot orbits around. It’s as if Paul Walker is a giant black hole of talent; his gravitational force draws others to him, but he has no mass of his own. It’s no wonder that Diesel steals the show; he demonstrates a kind of charismatic leading man quality that Walker is just no match for.

“Interesting, the Diesel-less sequel 2 Fast 2 Furious is a vast, vast improvement over the original. “

Interesting, the Diesel-less sequel 2 Fast 2 Furious is a vast, vast improvement over the original. We’re stuck with Walker’s Brian, but now he’s surrounded by a new group of characters that make him seem nowhere near as annoying, with the exception of his predilection to identify everybody as ‘Bro’ that is.

The scenery for 2 Fast changes to Miami, where we catch up with Brian still racing underground, no longer a cop after the adventures of the first film. Captured by the Miami PD, Brian is given the choice of going to jail or helping them bust a drug lord to get his record expunged. Obviously, Brian chooses door number two and recruits Roman (Tyrese Gibson), an old friend from back home, to help him nab the crooks.

Thanks to director John Singleton, this Furious has more style and narrative cohesion; there isn’t the meandering and melodrama in this one, but then again, it doesn’t pretend to be high art either. This is just pure enjoyment with great action, great races and great fun. Walker and Gibson make a good screen team. They’ve got great chemistry together and really seem as if they’ve been lifelong friends. Two other great additions are rapper-turned-actor Lucadris and Sin City’s Devon Aoki as a couple Brian has befriended in Miami.

On the other side, though, is Cole Hauser as the film’s villain and a thoroughly less believable hard-ass you’ll never find in the history of villainy. Simply saying lines like, “Don’t ever touch me,” with a hint of vinegar in your voice, doesn’t make you mean in and of itself, especially when you look like someone who could easily be beaten up by Paul Walker. Also, in this thing is Eva Mendes as an unconvincing federal agent who’s not given much to do while the boys race around and dodge the cops.

I feel compelled to say that my pre-viewing impressions of The Fast and The Furious films haven’t changed much. But I do have a new appreciation for 2 Fast 2 Furious as an enjoyable popcorn movie, best suitable for anyone looking for pure entertainment on an otherwise boring occasion. And sometimes, that’s all you need to get by.

I do have a new appreciation for 2 Fast 2 Furious as an enjoyable popcorn movie, best suitable for anyone looking for pure entertainment on an otherwise boring occasion. And sometimes, that's all you need to get by.
REVIEW SCORE
6
File Under: Paul Walker, Vin Diesel