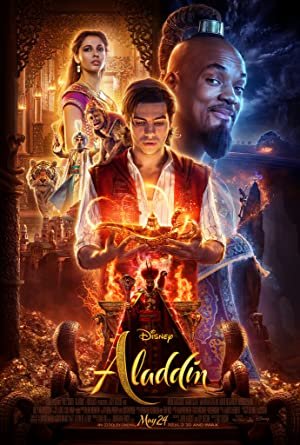 Mediating anything into a new medium is a daunting task, especially when what you’re translating is already heavily stylized, only sharing a passing resemblance to its source material.

In this regard, Disney has done an adequate job capturing the same magic and energy of their 1992 animated feature film Aladdin, which now joins the ranks of Disney’s still-budding, live-action collection of reimagined, animated classics.

Like previous, big-budget Hollywood adaptations, such as 2017’s Beauty and the Beast, Aladdin’s strongest asset is in its Star power, namely, Will Smith as Genie. Realistically, living up to the legacy created by the late Robin Williams and later, Dan Castellaneta in his portrayal of the same character for the TV series, makes creating a new Genie for the live-action film, all the more challenging. Thankfully, Casting Director, Lucinda Syson, made the right choice in picking Will Smith, despite the questionable CGI.

Will Smith as Genie works so well, as, like the character himself, Will Smith’s career really took off in the 90s, with the vast majority of his best-known work consisting of comedies. By taking his years of comedy prowess, with a few healthy doses of the Fresh Prince and a studied understanding of the original Genie, Smith’s portrayal brings the iconic character to life, while still managing to feel fresh (no pun intended) and authentic, carefully toeing the line between familiar and distinct.

Sadly, Smith’s Genie may just be a little too faithful, suffering from the same problem that plagued the original 1992 feature, in that in contrast to the other characters, including the lead, Will Smith essentially steals the show. Not to say Mena Massoud by any means does a poor Aladdin, rather, due to the movie echoing the original script, most of the other characters, which sadly includes some of the main characters, comes off feeling hollow.

Not all is lost, however, as this new reimagining of Aladdin, thankfully, introduces a few original ideas that help differentiate it from the original. For starters, Jafar and Aladdin’s relationship in the 2019 film is better realized, specifically in regards to Jafar’s past. 2019 Jafar is immediately portrayed as a common thief, which the original movie hints at, however, in this film, this character trait is used as a character foil for Aladdin and is later used as a means of moving the story forward in an exciting manner.

Similarly, Princess Jasmine, as portrayed by Naomi Scott, has been given some due depth, in terms of her ambitions and more importantly, a larger volume of actual dialogue. Guy Ritchie’s Jasmine tries her best to break the Disney Princess mould. A good example of this occurs during the later-half of the film, when Jafar reveals his true intentions, after wishing himself the position of Sultan, Jasmine pleas to one of her royal guards, in a manner that exemplifies her nobility, legitimizing her love for her country. In conclusion, 2019 Princess Jasmine is just a better, more nuanced take on the original Disney Princess.

Of course, a Princess needs her royal servants, even one as autonomous as Jasmine. Fortunately, a new character to the movie, Dalia, Jasmine’s handmaid, portrayed by Nasim Pedrad (Saturday Night Live, Despicable Me 2) fits the bill.  Dalia, who also acts as a love-interest for Genie, supports Jasmine in a way that helps her character develop, aiding her in making the decisions that further strengthen her throughout the film. Pedrad’s comedic background also helps create legitimate chemistry between Dalia and Genie, to the point where their relationship feels better-realized than Aladdin and Jasmine.

Visually, Aladdin 2019 is for lack of a better term, a mixed bag. Surprisingly, Will Smith’s mug superimposed on a hulking, blue ghost-like being works better than it should, at least after the initial shock wears off (ponytail and all). The bigger issue with the visuals lies in its background set dressing.  Although, not “bad” by any means, the environments, especially interior locales, such as the royal palace, comes off as generic-looking. 1992’s Aladdin offers stunning painted backgrounds (only bested by truly dated CGI) popping with colours that eloquently shift in tone, addressing the scene appropriately.

Unfortunately, the atmosphere in Aladdin 2019 feels more akin to a Bollywood movie rather than a distinct Disney feature, particularly in background shots that lack any of the main characters.   One thing the film does do well is its musical sequences, in spite of it still feeling jarring. Aladdin 2019 features both fan favourites such as Friend Like Me, Prince Ali, and of course, A Whole New World, in addition to a few new numbers that feature Princess Jasmine.

At its core, Aladdin is a story about overcoming personal prisons, or in the case of Jafar, succumbing to his own, corrupted ambition. In this regard, Aladdin 2019 does a good emulating the 1992 film, and in some instances, surpassing it with better-written characters, such as Jasmine. Ultimately, Aladdin 2019 does what it needs to do while modernizing some dated tropes, making it a good movie, particularly for younger, impressionable audiences, that may be unfamiliar with the original animated film.

Guy Ritchie's reimagining of Disney's 1992 Aladdin, transports audiences to a whole new world, with Will Smith's Genie, introducing a new generation to the fantastical world of Agrabah.
REVIEW SCORE
7
File Under: