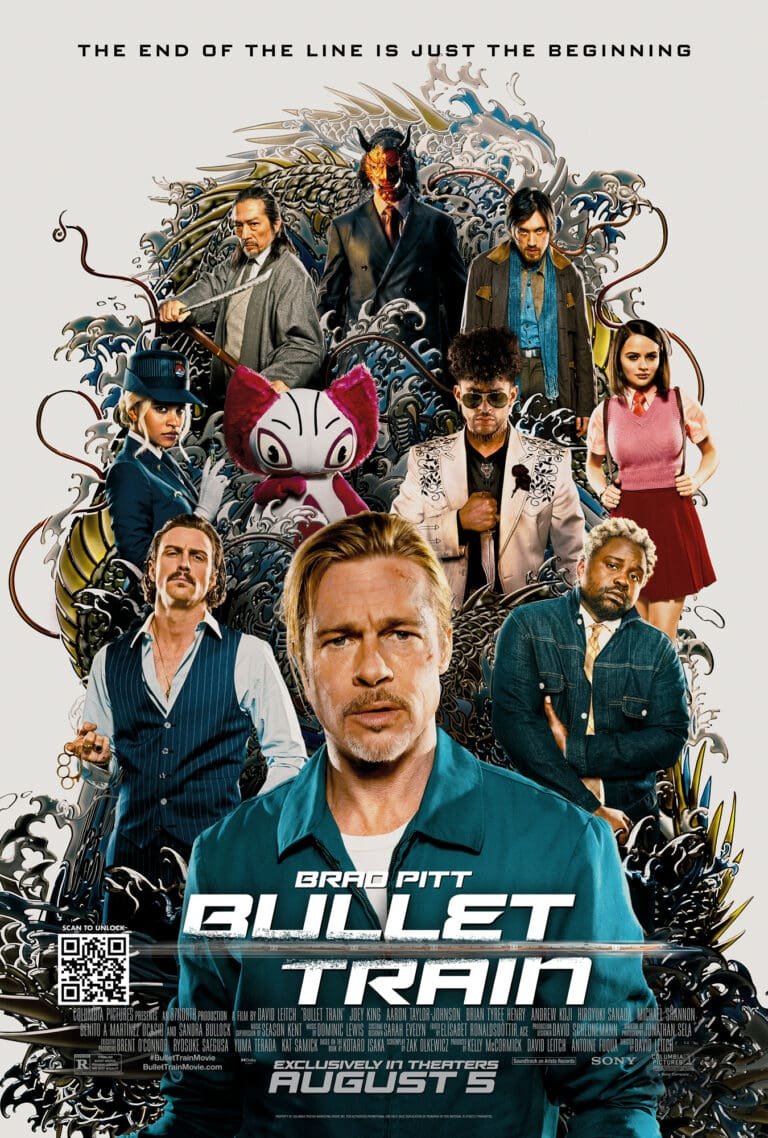 Bullet Train has the sleek, stylish working of its setting. Action keeps the two-hour schedule running with enjoyable twists. But like every commute through Hollywood’s action film scene, viewers sitting in the Bullet Train expecting anything new will be disappointed.

The Hollywood machine and a made-by-committee polish are deadlier than Bullet Train’s passengers. But its story finds a dysfunctional way of putting everyone at hell’s door. Seasoned killer codenamed Ladybug (Brad Pitt) is in Japan for a typical snatch-and-grab job. Aboard the train, he’s fighting to stay alive as other highly trained assassins are after it. The plot keeps things relatively simple for better. Bullet Train uses nearly every nook and cranny of its setting over two hours. Director David Leitch finds some fun while keeping everyone – both alive and dead – inside.

Bullet Train doesn’t take itself too seriously under its neo-Tokyo vibes. The film lightly touches on Japanese backgrounds. But viewers rarely feel that escapism, since the train starts to overstay its own welcome. It’s the puzzle Leitch tries to solve where films like Train to Busan, The Polar Express and Murder on the Orient Express pulled off admirably. I still appreciated Bullet Train’s pacing through every new train car. While Leitch and writers get carried away with exposition dumps to mind the gaps.

A-lister Brad Pitt turns on some action charms I haven’t seen since Mr. & Mrs. Smith. In fact, it only takes one Jolie-sized cameo for Bullet Train to be connected (I’m being hypothetical here). He clearly takes a back seat to drama. But to fight the train’s quirky bunch, Pitt is armed with a few quips of his own. In Bullet Train, Pitt plays a self-aware hitman renouncing the trigger and is fresh off therapy. The film tries to put a reluctant action hero front and centre. But Ladybug is a character viewers have seen time and time again. Pitt doesn’t do anything to reinvent the action hero here. He’s simply a surrogate for viewers to see hitmen sprint to the MacGuffin all at once.

Bullet Train tries to develop Ladybug’s arc for pacifism. Out of a violent R-rated film, this makes Pitt’s ever-changing tone so unconvincing. Fans of the actor will still see his charisma shine through his chats with handler Maria (Sandra Bullock). As the bullets, knives and water bottles start flying, Ladybug doesn’t exactly hold back either. Bullet Train still gets some laughs out of Ladybug’s nice-guy motif even if he snaps back at old ladies in the Quiet Car.

“Bullet Train doesn’t take itself too seriously under its neo-Tokyo vibes.”

Bullet Train does make an effort to scratch an itch for action fans who want something new. It’s a film where briefcases are the deadliest weapon. Viewers will get a gallon of blood and gore despite Bullet Train’s small cast. The two-hour commute even uses the violence to over-the-top, slapstick proportions. Somehow, Bullet Train’s action isn’t helped by flashy gunfights. Well-choreographed close quarter fights bring out the best in characters. Pitt still has the chops to crack a quip or two mid-fight. Until some wacky CGI scenes break up the authenticity Bullet Train could have gone all-in on.

David Leitch flexes his directing work from John Wick, Atomic Blonde and Deadpool 2. But sprinkles some weirdness to gauge a laugh or two from audiences. It’s a relief seeing Leitch preserve action that’s easier to watch in Bullet Train. Most fight scenes use longer takes. Others cut too quickly out of urgency. But this is an action movie that feels kinetic, punchy and equally enjoyable.

Fiji water will never look the same after viewers watch Bullet Train, and I’m all for it. Some of the film’s most creative bits involve weaponizing the most seemingly random things. Viewers will feel thrown off at small references that come a long way for the unlucky Ladybug. In fact, Bullet Train does what Uncharted should have by using luck as a running theme. I kept my eyes out for one key gimmick: using the train as a weapon. David Leitch and writers introduce some pretty cool concepts to the action film table. A fight scene in the Quiet Zone feels fun, equally tense and hilarious. But Bullet Train doesn’t fully embrace its claustrophobic setting to keep things special. A bombastic climax pits the cast against the destructive high-speed piece of infrastructure. But by the time Bullet Train squeezes out some more “themed” ideas, it’s too late.

Leitch tries to blend intelligence with a mindless action film. Bullet Train leverages this brain power out of a charismatic cast. Viewers could feel drawn in by the film’s professional, polite and self-conscious group of murderers. I expected nothing less out of Pitt warding off characters like The Wolf (Bad Bunny), who is given a lengthy backstory that goes nowhere. All assassins play caricatures viewers have seen before. Characters add to Bullet Train’s need to simply exist as an action film under its setting.

Both Lemon (Brian Tyree Henry) and Tangerine (Aaron Taylor-Johnson) are dyads for cheesy British dialogue. Lemon is a bit obsessed with Thomas the Tank Engine, but uses it to judge and suss out other characters. Tangerine is an impatient, energetic hitman with morals. They both share the best chemistry through a Tweedledee and Tweedledum dynamic. This only goes so far once Ladybug grabs the case and separates the two.

The film should be centred on Ladybug. But it’s actually the supporting cast who find clever ways to keep the two-hour trip going. Here’s where the film struggles to jam-pack character development in two hours. Arguably, Bullet Train could have worked better as an extended web series to flesh the story out. This comes from too much time spent on cutaway flashbacks. Viewers are taken out of the train with plenty of story exposition. Each character gets their fair share of reasons to be on the train. Bullet Train takes a decent jab at interconnecting everyone’s assignments. But ultimately, it comes together with cookie-cutter predicaments and some CGI-fueled train crumpling.

Some compelling story beats come from Yuichi Kimura (Andrew Koji), a father looking for revenge after his son was pushed off a roof. He’s also held hostage by The Prince (Joey King), an assassin disguised as a schoolgirl. King plays a convincing saboteur across Bullet Train as the adults are going at it. While her arc only really comes together when the mysterious White Death shows up. The film dumps lots of flashbacks to make the White Death a menacing badass. But it fails to stick like the film’s cutaways. I won’t spoil how characters like The Hornet (Zazie Beetz) are introduced. But Bullet Train finds some inventive ways to bring them in. Leitch even rounds up a few cameo appearances that are sure to surprise viewers. Of course, people are bound to die. While I’ll admit that Bullet Train has some clever ways of keeping characters alive by dumb luck.

Japanese covers of popular songs are used to remind viewers about the setting. As the train literally speeds over Japan, viewers won’t exactly find authenticity. The Elder (played by the iconic Hiroyuki Sanada) comes as a welcome scene-stealer once he comes aboard. The film pokes fun at his own brand of no-nonsense demeanour. Sanada adds some much-needed backstory and action. But Bullet Train adds him as a late addition for a meagre R-rated climax. It’s nothing viewers haven’t seen before out of any action film set in a train.

In fact, the film tastes like a burger – glued together by trimmings of other action films and their respective leads. This isn’t necessarily a bad popcorn-muncher, since Bullet Train is held up with impeccable production value. The film isn’t too far off from a compelling adaptation from Kōtarō Isaka’s 2010 novel. Creative action scenes come from a necessity to use every part of the train. Both stories find a group of assassins aboard the titular train with clashing assignments. Luckily and unfortunately, these events play out as viewers would expect in Bullet Train.

Bullet Train goes full speed ahead with bombastic R-rated violence, but refuses to slow down for action star Brad Pitt who is unmatched by the supporting cast and a generic plot.
REVIEW SCORE
6
File Under: Brad Pitt, Bullet Train, Sony