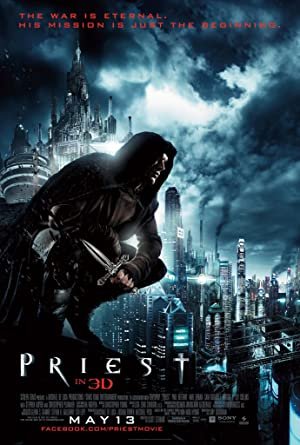 You wouldn’t think that a post apocalyptic vampire Western with a kung-fu fighting priest in the lead role would be boring, but you also haven’t seen Priest yet. Despite all of the trashy fun practically demanded by the central concept, the film can only be described as slow and stoic. Don’t get me wrong, there are certainly a few scenes with our main man of the cloth kicking some major vampire ass, but only after endless sequences in which he quietly bemoans the state of his existence without ever really saying anything. The filmmakers clearly took the screenplay (based on a popular graphic novel) very seriously and in the end that just wasn’t the right approach. If you can’t have fun watching a vampire western, then honestly what’s the point of even going to the movies?

Trying to explain the plot of Priest isn’t easy as it’s clearly the result of stacks of back issues of the comic condensed into 40 minutes of set up. It’s a lot of material to wade through as an audience, particularly since there’s no vampire action during that 40 minutes other than a very brief and mostly suggested attack/kidnapping in the opening scene. Paul Bettany plays a priest trained in the art of vampire ass-kickery by the church. In a time in which quadruped, almost amphibian vampires walk the earth, humans have been sequestered to cities where they are protected by the church and these cities are ruled by church leaders (embodied in by Christopher Plummer who brings about 5 minutes of dignity to the movie) as totalitarian states.  With the great vampire wars long over, the church now rules humanity in worn down Orwellian metropolises, with the once respected priests now relieved of their duties and walking the streets as outcasts. Now, that’s a pretty interesting world. Unfortunately in the movie it’s only featured in drawn-out expository dialogue and has nothing to do with the actual plot. The story concerns our priest who is convinced to come out of retirement by a cowboy (apparently it’s the ol’ West in everywhere other than in the futuristic cities) to track down his niece who was kidnapped by a mysterious cowboy vampire. Unfortunately the plot isn’t really as action-focused as it sounds, with most of the running time dedicated to overexplaining the world through endless dull dialogue scenes and more brooding than you’d expect from a suicidal teenager obsessed with Joy Division.

The film was directed by Scott Charles Stewart, who had a modest hit last year with the similarly apocalyptic Legion also starring Paul Bettany.  That movie was so over-the-top that it became campy and hilarious and it was unclear whether or not that was intentional. Based on Priest, it’s clear that wasn’t intentional. Stewart was sincere in his approach to Legion and directed that film with all of the subtly and nuance one would expect from a director who started out his filmmaking career in special effects. It’s clear that Stewart thinks there’s something meaningful to be said in Priest and perhaps that’s true of the comic book, but certainly not the film. It’s an empty shell combining a lot of religious and science fiction imagery that suggest meaning, but are ultimately just empty signifiers. It seems his plan of attack was that if he treated the material deathly seriously the audience would attach meaning for him. It’s kind of like an inkblot psychological test and equally insubstantial. The cast seem lost amongst Stewart’s empty style. Bettany just plays his role as a blank slate and lacks the screen presence of someone like Clint Eastwood necessary to pull off playing a mysterious character without a past or emotions. Christopher Plummer and Brad Dourif turn up to try and add character actor credibility in small supporting roles and you can’t practically seem them counting down the clock for the end of the day so that they can get their fat paychecks.

Of course, it has to be said that Priest is hardly the worst movie ever made. No film featuring kung-fu priests and cowboys fighting vampires is without its trash entertainment charms. It’s just that the filmmakers forgot the cardinal rule of B-movies: above all else, you must entertain the audience. It’s perfectly fine to add layers of meaning on top of a genre movie, you just have to put the thrill ride entertainment first and it wouldn’t hurt to actually have an idea of what you want to say with those layers of meaning too. Priest ends with a cliffhanger setting up a sequel, but fortunately I don’t think we have to worry about that happening. It’s hard to imagine audiences embracing Priest in large numbers. The movie is just too stupid for the art film crowd and too slow for the popcorn audience. If you ever wanted to see a film that made you appreciate the empty joys of the Underworld series more, Priest is the movie of the summer for you.