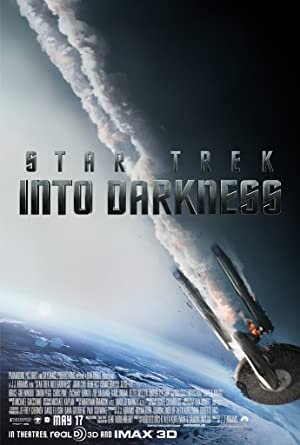 Four years ago JJ Abrams pulled off the impossible by transforming Star Trek from the most niche of all nerd franchises into an easily accessible blockbuster for the masses that somehow didn’t enrage the world’s most protective fanbase.

Inevitably, he had to do it again and somehow managed to create a rare sequel that actually tops the original in seemingly every conceivable way. Not only is Star Trek: Into Darkness (the title is easily the worst thing about the entire production) a breathless piece of blockbuster action that often feels like a story told entirely through set pieces, but the film manages to tip it’s hat to Gene Roddenberry’s initial intentions by putting a mirror up to the world for a bitter blast of sci-fi commentary on terrorism. In other words, this is easily the best Star Trek 2 since the last one and now both can rightfully duke it out for the title of best entry in the franchise.

Much like a James Bond or Indiana Jones opus, the movie opens mid-climax of an unseen Enterprise adventure. Kirk (Chris Pine) and Bones (Karl Urban) are dodging spears and fleeing on foot from a prehistoric tribe on a distant planet. They’ve committed a Starfleet no-no by revealing themselves to an undeveloped culture, but don’t have time to consider the consequences because they’ve got to get the Enterprise out of an underwater rest and save Spock (Zachary Quinto) from an erupting volcano. Whew! Then just when you think you’ve got a few moments to catch your breath as Kirk is being reprimanded by his superior officers for rule breaking, futuristic terrorist John Harrison (Benedict Cumberbatch) appears out of nowhere to blow the hell out of Starfleet’s command center, wiping out a bunch of senior officers and destroying some key Klingon related intel.

With that, the Enterprise crew is quickly dispatched to track down the mysterious Harrison (whose secret identity is one of the worst kept secrets of the summer thanks to IMDB, but that’s hardly a deal breaker) from the Klingon home planet Kronos. As if that weren’t stressful enough, Scotty (Simon Pegg) resigns his post after refusing to take on some special torpedoes since there’s no time for proper inspection, Chekov (Anton Yelchin) reluctantly agrees to fill in for Scotty, a mysterious/sexy new security officer is introduced in Carol (Alice Eve) who makes Kirk excited and Bones suspicious, Spock and Uhura’s (Zoe Saldana) relationship hits the rocks, and Sulu (John Cho) is around doing his thing as well. So all of that trouble is going on before the crew has to face Klingons for the first time and deal with Harrison’s inevitable second wave of terrorist attacks and double-crossings. Plus Peter Weller joins the cast as a suspicious new Starfleet commander who might have some trouble up his sleeve as well. Yikes…that’s a lot of movie.

If nothing else, you certainly can’t accuse of JJ Abrams not having enough plot or characters to juggle in this one. Yet, as a testament to his preternatural storytelling skillz (which he uses to pay the billz, in case you’re wondering), Abrams juggles all the competing plotlines and characters with ease while cramming in even more of the relentless action that made his last Star Trek outing so distinct. With script duties partially in the hands of Lost/Prometheus’s Damon Lindelof, there are an inevitable stack of distracting plot holes that add confusion and a few characters left dangling (in particular, John Cho and newcomer Alice Eve feel wasted at times). The thing is that Abrams keeps his film plowing along at such a relentless pace that you never have a second to breath and ponder the problems until it’s all over and by then he’s reached such a satisfying smirk-inducing climax/resolution that all is forgiven. Abrams’ visual storytelling abilities and sense of spectacle continue to improve as well (for one thing he’s mercifully cut down the crooked camera angles to a reasonable level). The film looks beautiful at all times with the major set pieces filmed in IMAX for extra sheen and a 3D polish that actually works laid on top. The lens flares are relentless once again, but the addition of 3D amusingly flings them right off the screen, which functions as both an intriguing aesthetic and an amusing middle finger to those who complain about Abrams using flares as a visual crutch.

Once again the cast live up to their iconic roles with Pine playing renegade boy scout well, Urban and Yelchin milking more comedy gold out of their inherited accents, and Zachary Quinto again proving a miracle of casting by nailing a role most thought only Leonard Nimoy could ever play. Simon Pegg’s role is beefed up this time, adding the mix of neurotic character comedy and action finesse that made his name. Unfortunately, with so many plot threads competing for attention and so many things blowing up, Saldana and Cho disappear to the background a bit this time, but I suppose the beauty of a franchise like this one is that that can be made up for with character expansion in the next chapter. Collecting these actors for these specific characters was probably the most impressive miracle that Abrams pulled off last time and all of them have proven they can do it again. The big new boy on the block is Benedict Cumberbatch and he somehow manages to steal the show away from everyone. Ignoring that sorta-twist of identity, Cumberbatch finds a suitably cold face of evil to play in counterpoint to the lively heroes. His plot follows frankly bonkers logic, but he executes it with a steely precision that’s both charmingly endearing and deeply disturbing. Given that he’s already played both Steven Hocking and Sherlock Holmes, this is clearly an actor with range and he takes delight in crafting what is sure to be the most memorable villain of the summer (unless Ben Kingsley counts, controversial twist and all).

Abrams also finds plenty of space for fan service as well, tossing in a tribble for giggles and filling the script with character, plot, and visual references to a certain beloved cinematic entry in the franchise. He does so much so right here that it’s almost a shame to think he will be abandoning Star Trek for that other Star franchise now, because it’s hard to imagine who will step up to deliver on all these promises in part three. However, that’s probably for the best. Abrams always admitted he was never a Trekkie and many of the changes he made to this series was essentially a Star Wars-ification of the Star Trek universe. The director stripped away all of the unnecessary jargon and convoluted self-mythologizing that had made Trek a fans-only franchise. Ironically those are the problems that have come to plague the Star Wars franchise in a post-prequel world and a little Abrams influx might be exactly what that series needs to become the most popular modern mythology once more. Regardless, even if Abrams didn’t plan it this way, Star Trek Into Darkness feels like a perfect swansong for his time in the franchise, leaving Trek in its most accessible and popular state in years. Now the fanboys can commence their nail-biting over whether or not he can repeat this trick in a galaxy far, far away. If it were anyone else, I’d be skeptical. But I’ve got a feeling that George Lucas has passed his light saber on to the perfect padawan.

Now the fanboys can commence their nail-biting over whether or not he can repeat this trick in a galaxy far, far away. If it were anyone else, I’d be skeptical. But I’ve got a feeling that George Lucas has passed his light saber on to the perfect padawan.
REVIEW SCORE
8
File Under: Marvel, Star Trek