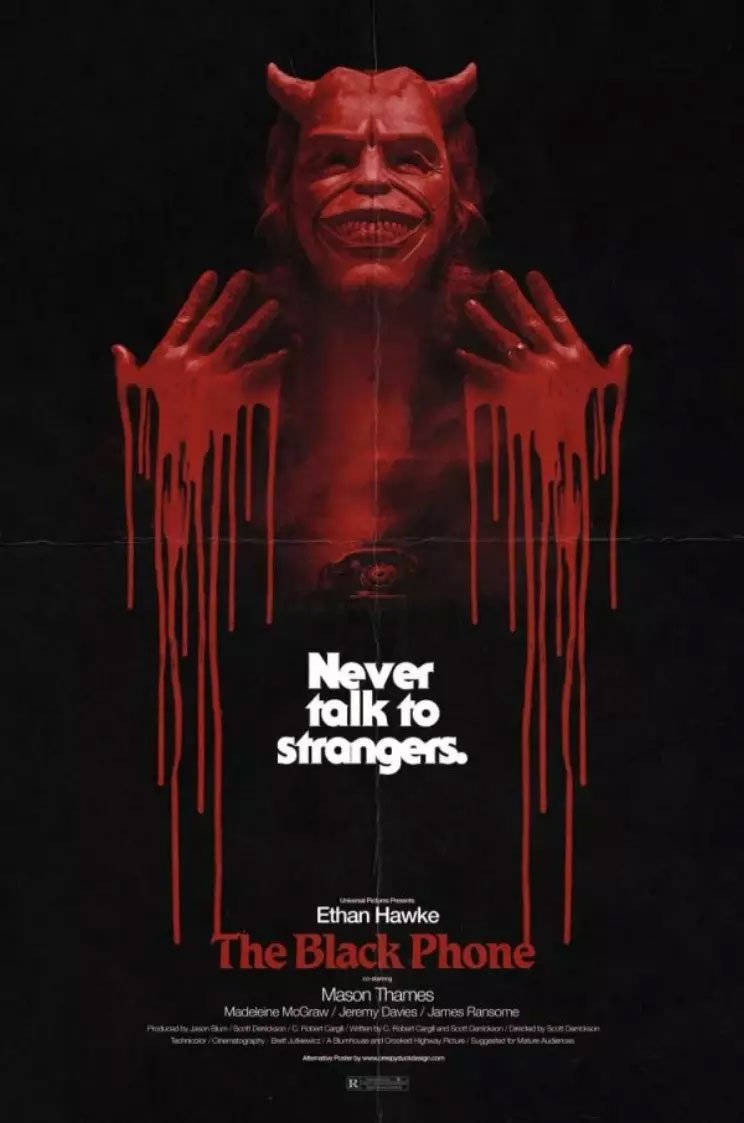 Horror movies are rife with deranged killers, monsters and boogymen but often rely on an older cast that inevitably composes the final body count for when the credits roll. The Black Phone is different.

After a string of missing boys in a sleepy Colorado town go missing, a not-so-nuclear family’s already chaotic and dysfunctional life is shaken when the eldest of the two children, Finney (Mason Thames) winds up as the latest abductee.

Set in the 70s, The Black Phone uses imagery reminiscent of true-crime documentaries and old news footage to illustrate the film’s main antagonizing force, known as the Grabber (Ethan Hawke). This approach to design adds a creepy, old-fashioned feel to the film while raising an increasing feeling of haplessness from outside forces, such as the police and FBI, due to the lack of DNA evidence and modern forensic sciences available at the time.

Thankfully, Finny and his sister Gwen (Madeleine McGraw) seem particularly sensitive to the paranormal, with the movie hinting at the early demise of their mother attributed to her closeness with the unknown. The lack of a maternal figure hits the hardest regarding Jeremy Davies’s portrayal of Finny’s father, Terrance. The single father is shown throughout the film as an abusive alcoholic, haunted by the reminder of his late wife’s paranormal prowess as it manifests in his daughter after she starts accurately dreaming of the whereabouts of the missing boys and, later, her brother.

“The Black Phone surprised me…”

Early on, Terrance is seen abusing Gwen by beating her with his belt; this not only sets the tone for the rest of the movie but also parallels Hawke’s character’s sinister actions later. In fact, The Black Phone’s R rating is truly warranted as the film goes places that other mainstream horror films seldom dare to venture.

Mercifully, the movie includes moments of levity that feel organic and earned without taking away from the dark subject matter and moments of pure terror. Of course, the titular black phone makes an appearance, specifically in the basement of the Grabber, something he states as being broken but prone to what he believes to be static electric noise.

Without delving into spoiler territory, the phone acts as a means to connect with the dead in a game of literally broken telephone, fitting the persona of dead young men. The supernatural elements within The Black Phone are eloquently sprinkled throughout, never overstaying their welcome or taking away from the true horrors of child abuse; instead, acting as a connecting thread that brings the movie to its climax in a satisfying way.

Standout performances include McGraw as Gwen, a rambunctious young girl with a surprisingly foul mouth that can stand toe-to-toe with boys twice her size and adults. Jeremy Davies’s character then wholeheartedly embraces the disorderly and drunkard father, the only character outside of the Grabber who can phase her ironclad armour, creating genuine heartbreak in the scenes in which she is less than herself.

The dynamic between Hawke’s creepy portrayal as the Grabber and Mason Thames as Finny equally highlights strong character foils that play with each other, leading to interesting situations in which they both try and overcome the other in believable ways.

Aesthetically, The Black Phone, for the most part, continues to nail the look of a by-gone era both visually and thematically; in particular, a scene in possible bodies discovered in the foundation of a building harkens back to the real-world crimes of John Wayne Gacy. If Stephen King’s IT borrowed the Clown aesthetic from real-world criminals, The Black Phone embellishes it to a sinister stygian finish.

One slight complaint I do have with the Black Phone in its visual presentation is the portrayal of the Grabber’s mask, which, although creepy and unique, feels too meticulously crafted, almost as if the Grabber stole it off the set of a movie production rather than something he hodge-podge together or bought from a discount store. Thankfully, the more paranormal scenes within the film look fantastic and genuinely creepy, reminiscent of movies such as The Sixth Sense and even games such as Silent Hill.

The Black Phone surprised me; I tend to find many horror movies fall back on the same tropes and cheap thrills that every other film prior popularized. Instead, The Black Phone takes familiar concepts and carefully crafts an authentically atmospheric thriller that horror fans will appreciate.

The Black Phone takes a familiar setup and subverts expectations by pushing the envelope in its depiction of horror while still making sure to include moments of brevity and good character development.
REVIEW SCORE
7
File Under: Blumhouse, Horror