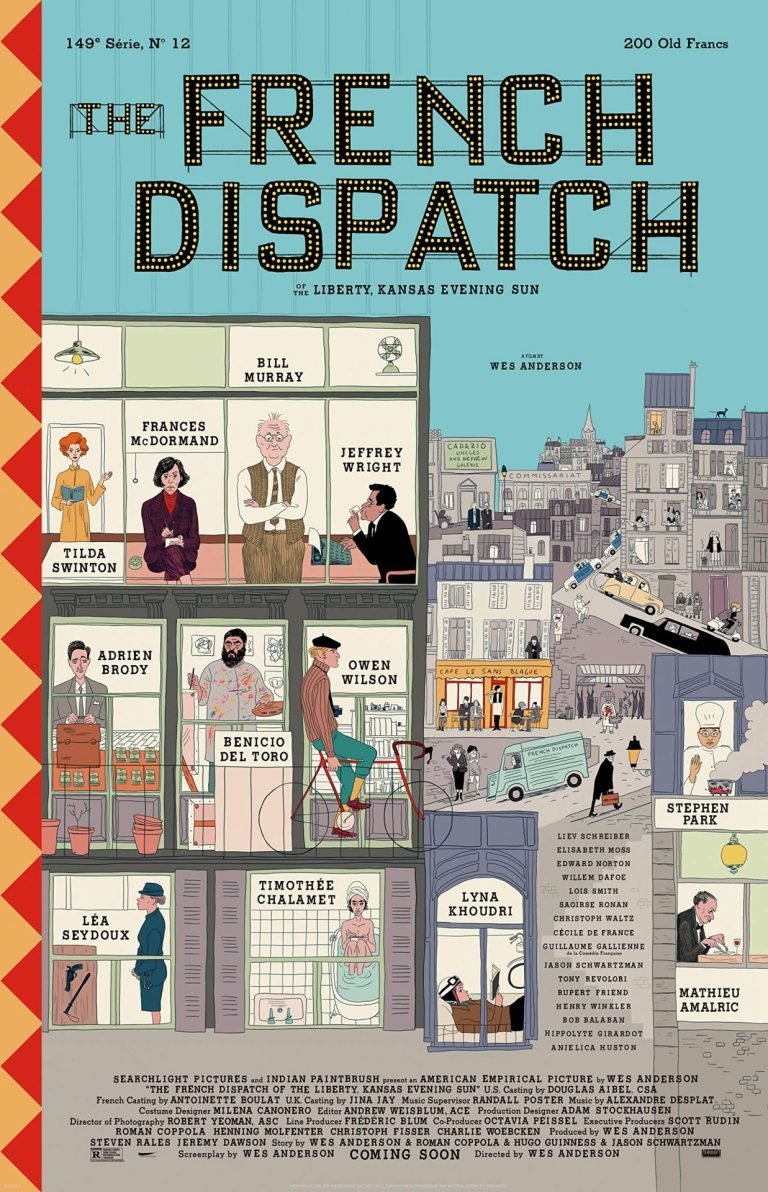 I will admit, as I anxiously waited for the lights in the theatre to go dim and the previews to begin, I profusely thought to myself, “How the hell have I not seen a Wes Anderson film?” I told my friends, and they were impressed rather than insulted. As soon as the credits rolled, I realized I was starving and parched for more stories from beyond my hometown to whet my barren, dry brain. The French Dispatch makes me appreciate that even the simplest of unknown, small towns can offer the most interesting (mis)adventures when you look at their citizens with a ridiculously large microscope.

Wes Anderson’s The French Dispatch can be oversimplified as a comedy-drama anthology. After thinking about how the film was primarily shot in 4:3, it’s like Anderson slipped in a little cinematography joke with the numbers four and three. The choice to have the story be told like it’s supposed to be in a print magazine is evident from beginning to end, with titles popping on the screen such as “Obituaries”.

The storyline can also be thought of as a full-course meal, with the introduction offering a little olive tapenade appetizer, the three stories making up the confit de canard for the entrée and finally, for the dessert, crème brûlée for a sweet ending to tie the whole dining and viewing experience together. Alternatively, the three stories in The French Dispatch can be a three-piece meal made by three different chefs to deliver a delectable dining experience independently.

The beginning opens with a fixed capture of individual pieces of paper hanging on mechanical hooks, travelling left to right, from the background into the foreground—a typical mechanization of the 20th Century printing press. The wonderful, Anjelica Huston, narrates how the death of the American, French emigrated editor-in-chief, Arthur Howitzer Jr. (Bill Murray), took place.

It’s revealed through more explanation that he ran an American magazine called “Liberty Kansas Evening Sun”, which he started when he came from Kansas to the fictional French town of Ennui-sur-Blasé. A fitting name that translates to “Boredom on Blasé”—a great way to intricately describe how this town is unimpressive and craving some excitement. Oddly enough, the stories that Liberty publishes give their readers a sweet, white powder high with the mouthwatering writing its journalists and head chef, Arthur, bring to the table with each issue.

It would be a disservice to this masterclass flick without bringing attention to Anderson’s meticulous direction. One of the first scenes with the magazine news team trying to piece together their final issue is squarely suffocating the screen with its cast members crammed into the chosen aspect ratio of The French Dispatch. However, Anderson does this with purpose, to set up quick-fire jokes when the camera pans out or shifts focus on visual quips. Murray’s bored, stone-faced delivery is perfect for the wonderful stories that come out of his writing kitchen.

Before the main course begins, one of Liberty’s writers, Herbsaint Sazerac (Owen Wilson), gives a short, detailed description of the town of Ennui from his perspective of cycling through the town’s cobblestone streets and Venetian-like waterways. What he describes and writes about the common folk of Ennui is as simple as a white restaurant plate.

Not much happens other than the typical eight bodies that wash up in the river annually and the recurring rising water levels that flood the lower parts of the city with grimy sewage water and gallons of slimy, black worms. Tasty! Wilson’s serious fascination with the city’s plain routines sells the drab and ominous factor the three stories to follow will be staged around.

The first course begins with one of three tales which centres around the magnificent characters: Moses Rosenthaler (Benicio Del Toro), Simone (Léa Seydoux), Julian Cadazio (Adrien Brody) and the writer of the account, J.K.L. Berensen (Tilda Swinton). This wonderful ensemble brings an insightful look at how there can be certain people in prison who have so much to offer society, even if his muse was found after killing and dismembering two men.

Del Toro and Seydoux’s on-screen love invites so much dark humour that it had me hooked and laughing without remorse. Brody and Berensen’s use of fast-paced dialogue served as side dishes to help moments of exposition and afterthoughts best kept to oneself. This youthfulness love and deeper meaning translates into the second tale of The French Dispatch.

The second Liberty story features a profile journalist, Lucinda Krementz (Frances McDormand), Zeffirelli (Timothée Chalamet) and Juliette (Lyna Khoudri). I believe this part of the main course summed up the common cautionary fiction of teenage angst and dying in one’s ‘prime age’. This part of The French Dispatch was probably the least interesting of the three to me—being how it’s a too familiar take on adolescents “taking on the world”. The outrageous naivety of young revolutionaries is sold well by Chalamet and Khourdi’s disillusioned, fully aware performances that can be taken with a pinch of salt in the sea of many similar coming-of-age romances.

“The final narrative is the most ambitious of the meaty menu in The French Dispatch.”

Everyone’s role in this thrilling, wacky ride enhances the Noir experience, along with an unusual Archer-style animation of a car chase. Arguably, the pièce de résistance was that Jeffrey Wright plays their outstanding, typographic memory character, so fine-tuned with food as it blends into the action happening around them.

“The French Dispatch just leaves me wanting to digest more stories from Ennui’s writers and people.”

The bittersweet end closes with all the Kansas Liberty writers and staff attempting to write an obituary on Arthur that ends with them getting the basic facts down, but as the camera pans out, the inaudible dialogue spells out there’s so much more to learn about Arthur before his work at publication. This rendition of writing out of Anderson’s adoration for The New Yorker successfully captures the spirit of journalism, ensuring that the best of stories can be told from the dull town of Ennui or anywhere else in the world.

I enjoyed the stacked cast immensely with their cutting-edge approach and distinguishing flavour to each character. The French Dispatch just leaves me wanting to digest more stories from Ennui’s writers and people. I will never leave a single Anderson movie uneaten again.

The French Dispatch masterfully paints a splendid portrait of postmodern colours and stories that set precedent for the future history of journalism through cinematic delight.
REVIEW SCORE
9.5
File Under: Film