The Hobbit: An Unexpected Journey (2012) Review 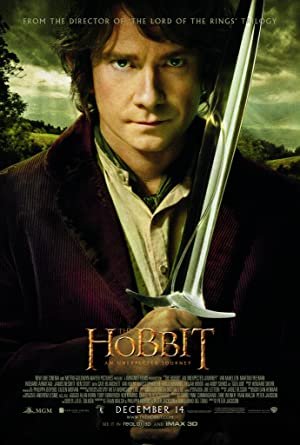 Ten years ago a pleasantly plump New Zealand filmmaker (who had earned cult fame off of a trilogy of bad taste splatter comedies, a dark teen girl serial killer drama Heavenly Creatures, and the still deeply underrated The Frighteners) shocked the world by being given a then unheard of $300 million budget to film J.R.R. Tolkien’s unfilmable Lord Of The Rings. The result was an instant box office and cultural phenomenon that broke $$ records, swept up Oscars, and provided those who had been heartbroken by the Star Wars prequels and The Matrix sequels with the new holy geek trilogy they craved. It was inevitable The Hobbit would follow. There was too much cash too be made and a great story to tell.

But, thanks to a studio collapse, a fired filmmaker, political scandal, and other comedic setbacks, it took ten years for it to happen. Now Peter Jackson has finally returned to Middle Earth and somehow transformed a book shorter than each of the three LOTR tomes into a new epic trilogy. It’s no longer an underdog blockbuster. Now we’re looking at a swelled commercial product that seemed to swell out to a trilogy of filmmaking megalomania and studio greed. Thank God, it’s good.

If you never flipped through the pages of The Hobbit as a wee lad, I suppose some sort of summary is in order. Remember when Bilbo would rattle his mouth about his former “adventures” in The Fellowship Of The Ring? Well, that wasn’t a just a bunch of hot air and malarkey. Many middle earth moons ago Gandalf (Ian Mckellen again, thank God) showed up at the house of the lazy, boring, homebody young hobbit (this time played by the delightfully bumbling Martin Freeman of The Office) and told him he was going on an adventure. Later that night, 13 dwarves showed up led by the disgraced former dwarf king Thorin (Richard Armitage). They ate and drank and spoke of how goblin armies destroyed their kingdom and stole their riches. Desperate for redemption they now plan to walk across the land (everyone love walking in that place) to steal gold from a dragon. Bilbo reluctantly agrees and before you know it, they’re hearing speeches from elves and wizards, battling goblins, chattin’ with Gollum (Andy Serkis, who is also a second unit director this time), and going on that adventure we were all promised. Then just when things start getting exciting, the film stops.

So, if you’re wondering, nope you don’t get to see the legendary dragon Smaug. Oh sure you get to see a city destroyed and a teaser at the end, but the fire-breathing star of the show is kept hidden for part two. Now, it must be said that there is really no reason why The Hobbit couldn’t be contained to a single film. We’re getting a trilogy because the Peter Jackson who once rightly believed Tolkien needed to be chopped down and adapted to the screen became a purist somewhere in the midst of cutting together the Extended Edition DVDs. Not only can’t he bear to part with superfluous sections of Tolkien’s text, but he’s added material from the LOTR appendices to make things even longer. Sections like a subplot involving the feral PETA-friendly wizard Radagast The Brown drag and should have been cut. The first chapter of The Hobbit trilogy goes beyond fan service and into the realms of plodding reverence. However, when it soars the results are unforgettable. The opening dragon destruction and the climatic goblin beat ‘em up rank amongst any action scenes that Jackson has crafted before, while the newcomers to the cast (especially the hilariously earnest Freeman and the pained heroics of Armitage) create mythic heroes that belong in the canon. The movie feels like a logical extension of the series and not a needless decade late cashgrab. In a world where Lord Of The Rings got a proper film treatment, The Hobbit needed its big screen love as well and Jackson was born to play in this sandbox.

It’s a movie far easier to pick on than what came before and one that stretches out all the LOTR weaknesses to the breaking pointThis is the type of epic cinematic experience that justifies inflated modern ticket prices, delivering an experience that demands to be seen on the biggest of screens. I suppose it’s also worth mentioning the whole HFR 3D thing as well. This is the first film ever shot and projected in the fancy-pants new 48-frames-per-second system and the results are jarring at first, but undeniably immersive. To quickly explain, films are shot at 24-frames per second, but Jackson’s new cameras double that. What’s that mean? Well, first off all the clarity of the image is mind-boggling and movement is more natural to the eye than we’re used to. It’ll take a bit for your eyes to adjust because you’ve literally never seen this before and even when that happens, there’s no denying the image looks digital and not like film. Many people have bashed that before, many people will bash it on release. However, it’s worth noting that the new presentation does look gorgeous, it’s just different. It’s not film, it’s something new and if the internet outcry is harsh enough, this might be the only time we’ll ever see it. The number one thing the HFR system does is eliminate all the problems with 3D. The image is so bright and clear that all of the blurry and dark issues associated with 3D are non-existent and the limitless depth of field of the new shooting style means there’s always depth to exploit. If 3D sticks around, this is how it will appear in the future and I’m sure all of the video complaints of the moment will soon go away once the technology improves and everyone gets used to the new visual presentation.

So, there you have it. Jackson has kicked off his Hobbit trilogy that fanboys will be slobbering over for the next three years and it’s off to a good start. No matter how uneasy you may feel at first from the new visual presentation and the plodding plotting, somewhere about halfway through you’ll be seduced again and the film feels like visiting an old friend. As the series continues we are going to be treated to one of Tolkien’s finest battles and what will surely be some of the greatest dragon action ever filmed. The trilogy is only going to get bigger and better from here and for the next three years at least we can guarantee there will be one satisfying blockbuster series to get giddy about annually. While The Hobbit may be slow to start, it has the payoff of an epic and let’s not forget that The Fellowship Of The Ring doesn’t exactly feel as exciting once you’ve seen the follow ups. This film only seems small and lackluster because of what we’ve seen before, so dismissing it for that reason lacks foresight. This is only the start of something, the first steps on a long satisfying journey. Based on what’s come so far, what will follow is sure to be astounding. Peter Jackson’s Middle Earth lives again and thankfully everything seems to be exactly where he left it.

This is only the start of something, the first steps on a long satisfying journey. Based on whatâ€™s come so far, what will follow is sure to be astounding. Peter Jacksonâ€™s Middle Earth lives again and thankfully everything seems to be exactly where he left it.
REVIEW SCORE
7
File Under: Marvel, The Hobbit, The Lord of the Rings