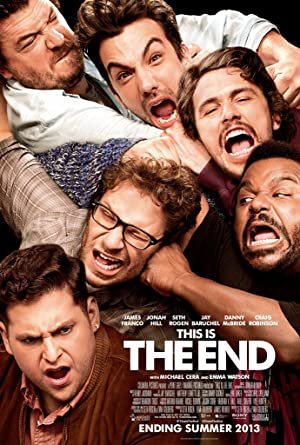 Seth Rogen may have made his share of conventional and even crap comedies, but whenever he and his hetro-lifepartner/co-writer Evan Goldberg crank out a script, they usually bring their particular brand of dick joke comedy to variety of genres.

After slamming a hard R back into teen comedies with Superbad, the duo have tried their hand at a stoner/action movie in Pineapple Express and even an unwise dabbling into the superhero genre with The Green Hornet. Even though the marketing department has gone out of their way to conceal this fact, their latest movie This Is The End is actually an apocalyptic horror flick hidden within a self-mocking celebrity comedy. Sure, the laughs come first and it might actually be the funniest project that Rogen has lent his name to. But make no mistake Rogen and Goldberg have staged their own personal biblical apocalypse as well, filling it with far more severed heads, tattered limbs, and full on demon rape than anyone possibly could have expected. It even works and as a result is one of the most unpredictable and cripplingly funny flicks cranked out of the studio system in years.

Things start off in a fairly standard Seth Rogen stoner comedy mold with his whole gang of big screen buddies playing themselves. Jay Baruchel flies to LA from Canada to visit Rogen for a planned weekend of hazy red-eyed movie watching, videogame playing, and snack consumption. Then they are invited to a big ol’ Hollywood party at James Franco’s house, which the Hollywood-loathing Baruchel attends in exasperation. Franco pops up as a hysterically pretentious version of himself in a custom mansion he designed and decorated with his own paintings. Jonah Hill is an overly sensitive soul bordering on the homoerotic. Craig Robinson sings about panties to Rihanna. Michael Cera double teams girls with juice boxes in his mouth and spits cocaine in strangers’ faces. Jason Segal whines about his sitcom life. So far, so silly and if the whole movie remained a celebrity ego, it would be damn good. But then just as the movie seems to find a comfortable rhythm the apocalypse hits. Bodies are sucked up into the sky, Cera is impaled, and Aziz Ansari falls into a pit of molten lava. This is the point when I’d say, “all hell breaks loose,” but probably shouldn’t because that’s too literal. Ah well, too late.

From there, the movie settles into an apocalypse yarn with Rogen, Baruchel, Franco, Hill, Robinson, and their egos trapped inside a mansion as the world crumbles around them. The bicker and do drugs and occasionally peak outside to see bloody bodies and burning rubble. Danny McBride pops up to do his angry redneck routine and push the tasteless R-rating even farther, ranting about proper masturbation etiquette and eating up supplies just ‘cause. Of all people, Emma Watson turns up seeking refuge, but instead ends up in the middle of rapey confusion. Then just when the movie seems to have hit it’s bleakest point the apocalypse sneaks into the house. Characters are possessed with all the projectile vomiting that suggests. The body count stacks up. Even cannibalism enters the equation. Obviously the laughs come fast and furiously throughout, but Rogen/Goldberg (doing double duty as directors for the first time) stay surprisingly true to their film’s horror roots, delivering some effectives scares, gag-inducing gross outs, and even some big scale effects sequences that you’d never expect going in.

Rogen and Goldberg’s knowledge and love of their genre movie source is a huge reason for the film’s success. They’re a little green as directors and deliver a couple of sloppy set pieces, but the fact that there are even scares and action scenes that work is a pretty damn pleasant surprise. References to flicks like Rosemary’s Baby and The Exorcism pile up and the twisted atmosphere the filmmakers deliver isn’t undermined by unflattering comparisons. After decades of desperation from Leslie Nielsen and the Scary Movie hacks, Rogen and Goldberg even deliver the first rock solid Exorcist parody ever achieved. Horrorheads may not have been told about it before release, but This Is The End is a full on horror/comedy and a pretty great one. As much fun as it will be to watch unsuspecting viewers get sucked into the sick joke, it really is a shame the horror fans will only find out about it through word of mouth because that audience will be impressed. Granted, this falls more into the Ghostbusters scale of horror comedy than something like An American Werewolf In London. It’s very much a laugh factory first, but the fact that the genre flavors are effective is an unexpected joygasm.

The comedy side of things is handled as well as you’d imagine from these laugh-spewing specialists. All of the cast gleefully mock or invert their public personas with a refreshing lack of ego. The guys all gleefully joke about themselves in ways that only good friends could talk you into and the self-satire never gets stale. All of the pee-drinking and drug binge apocalypse desperation humor works well enough to put searing pains into viewers’ sides and even the troubled bromance life lessons give the anarchistic shenanigans a necessary heart rather than serving as a weepy distraction. It might all be as frivolous as a well-timed fart joke, but pure entertainment this consistent and unrelenting is nowhere near as easy to pull off as it seems. It’s a shame that the film is being released to inevitably be buried by a blockbuster about certain ridiculously powerful man in tights this weekend because the same audience of genre n’ comics nuts flocking to that movie is sure to love This Is The End as well. Hopefully it hangs around long enough to be a hit in theaters because this isn’t just the funniest movie of the summer so far, it could end up being the funniest flick of the year. This is the type of movie that will have theaters vibrating with laughter from viewers struggling to fight off heart attacks and is sure to wear out dorm room DVD players along with copies of Anchorman and The Hangover for the foreseeable future. Well, maybe that’s a little much. This Is The End is friggin’ hilarious though and the fact that it’s horror elements actually work is the blood-splattered icing on the corpse.

This is the type of movie that will have theaters vibrating with laughter from viewers struggling to fight off heart attacks and is sure to wear out dorm room DVD players along with copies of Anchorman and The Hangover for the foreseeable future. Well, maybe that’s a little much. This Is The End is friggin’ hilarious though and the fact that it’s horror elements actually work is the blood-splattered icing on the corpse.
REVIEW SCORE
9
File Under: Comedy, James Franco, Jonah Hill