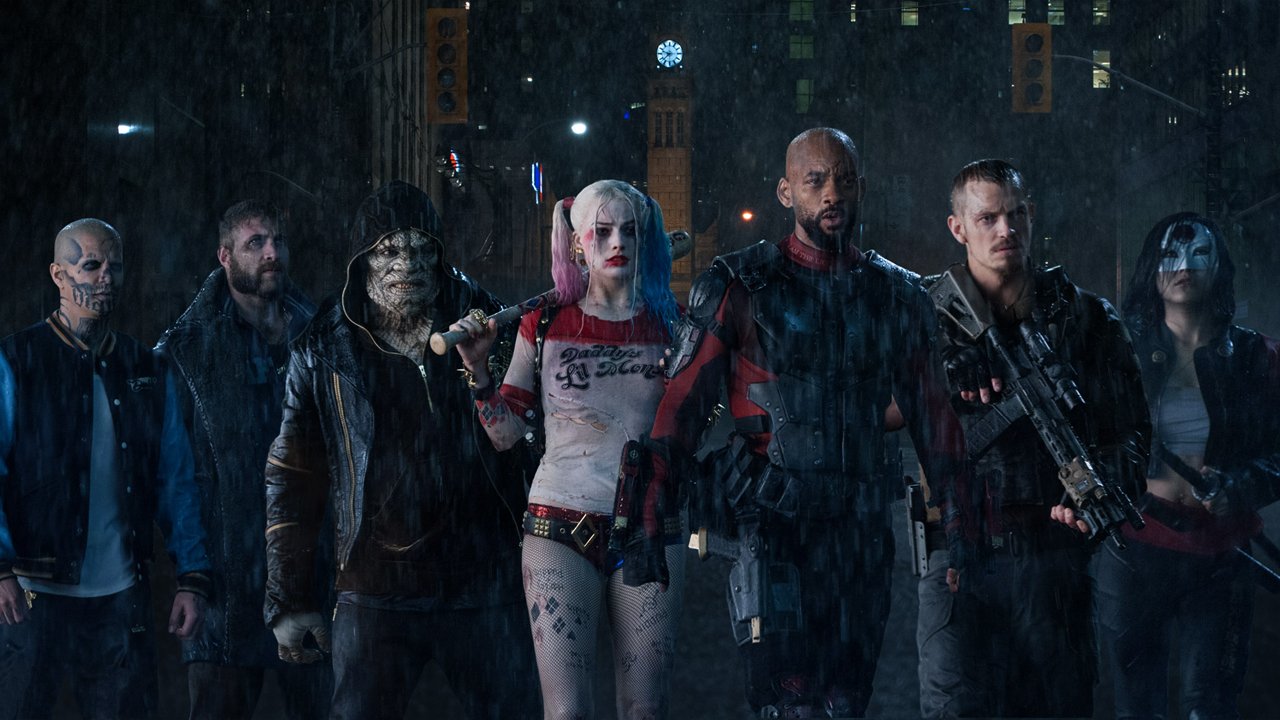 If you’ve had internet access over the last few years, then chances are you’ve been inundated with images from Suicide Squad. It’s that weird little stepchild to Batman V. Superman that Warner Brothers planned to help launch their extended DC Cinematic Universe. You know, the one with all the tattoos and Hot Topic outfits. The summer blockbuster that’s been begging for attention like an emotional teen, hoping that someone will take it seriously because it’s so edgy and not your mama’s superhero flick. From the moment the first images from production hit, Suicide Squad has seemed desperate for an identity. As goofy music video trailers racked up hits on YouTube, the movie’s producers held panicked reshoots, hoping to make the film a bit sillier after the chilly public reception to Zack Snyder’s sombre superfriends match up. The final film sure looks like the product of way too many chefs in the kitchen: an overblown, over-edited, and under-written collection of self-consciously “cool” scenes that only occasionally flow together with any dramatic purpose or pay off. It is kind of fun in its own sloppy way, though. So that’s something.

Writer/director on Suicide Squad, David Ayer, opens things up with a solid 30 minutes of character introduction scenes backed with some of the most overused needle drop pop songs in movie history. Viola Davis emerges as an early lead before promptly disappearing from the script. As Amanda Waller, she plans on rounding up some particularly prominent bad guys to send on deadly missions that superheroes aren’t willing to handle. She’s already got Enchantress (model and technically actress Cara Delevingne) going on spy missions because the government has the witch’s heart in a box (yep for real). Now she wants to sign up wise-cracking assassin Deadshot (Will Smith), Joker’s girlfriend Harley Quinn (Margot Robbie), obscure Flash bad guy Boomerang (Jai Courtney), fire-spewing gangbanger Diablo (Jay Hernandex), scaley monster man Killer Croc (Adewale Akinnuoye-Agbaje), and a few others of lesser consequence. As soon as Waller announces the plan, a major city is attacked by CGI evil beings, faceless henchmen, and a giant beam of apocalyptic light. So the team must go into action, injected with explosive devices in their necks to ensure that they complete the mission. Cue action and one-liners and stuff. 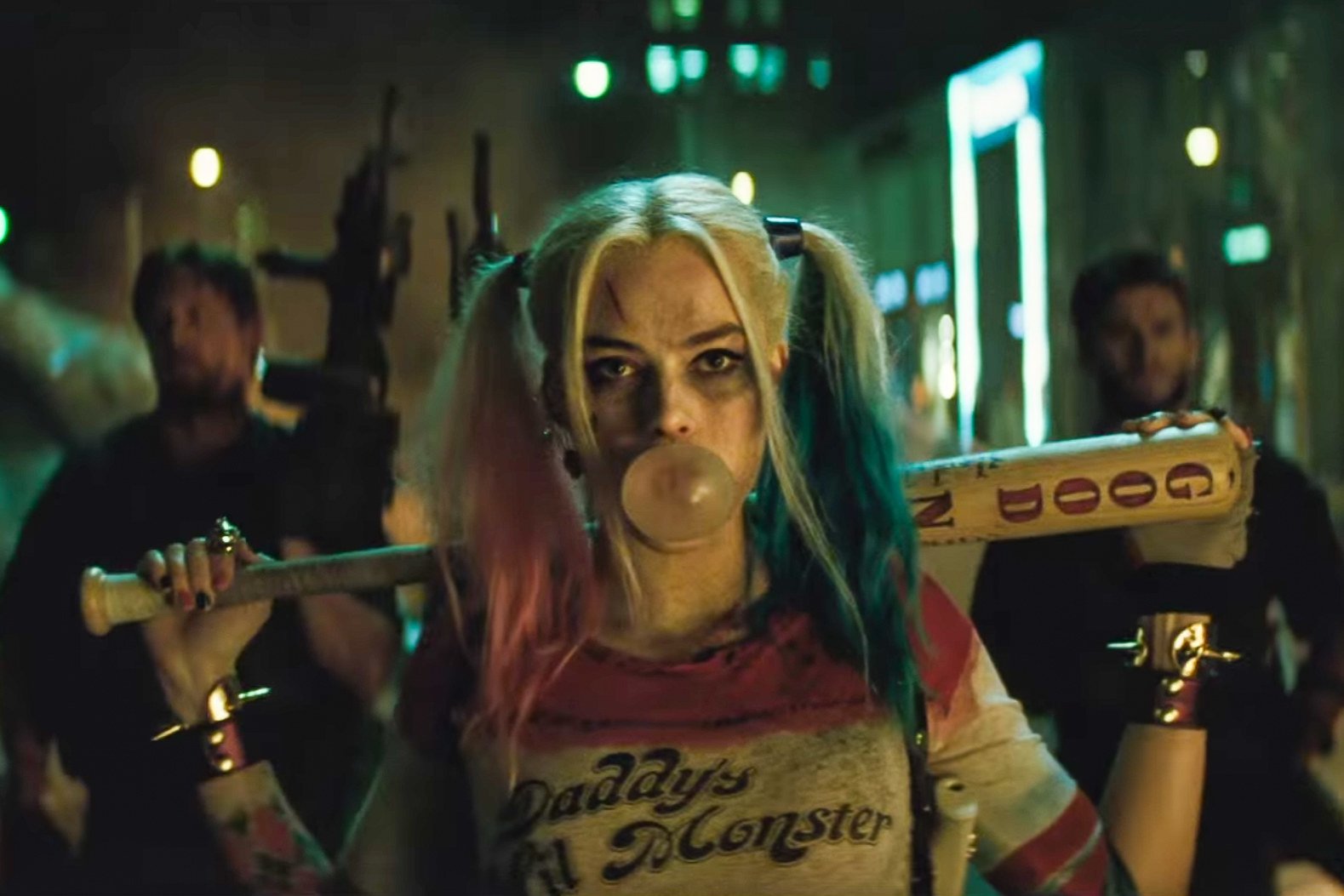 Suicide Squad spends so much time establishing its premise and introducing its central characters that there’s barely any time for it to deliver a story that makes much sense. Perhaps in an earlier cut of the movie, it was clearer what the main threat in this flick is and why we should be concerned about it (it’s clearly tied to Snyder’s New Gods master plan and so has been toned down, since no one particularly cared for the other big DC summer movie). As it stands, once the threat is set up, the movie devolves into a series of loosely connected scenes where the Suicide Squad either crack jokes, brood, or beat people up. Even though this is theoretically a team-building movie designed to set up sequels, there’s no real sense of why these people become friends beyond the fact that the story and title dictate that they must. The pacing is fast but incoherent, and essentially lacks an overall structure. Scenes and sequences are tightly and/or excessively edited into mini-music videos that work well in isolation, yet barely connect to the whole. Even the much-marketed Joker (Jared Leto) subplot is so disconnected from the main storyline that it could have easily been edited out. Suicide Squad very much feels like a movie that got a green light based on its premise and cast, but was then written and endlessly rewritten on the fly and reshot throughout post. The result is a sloppy mess of a movie, but at least one that still has a good hook and some fun performances. 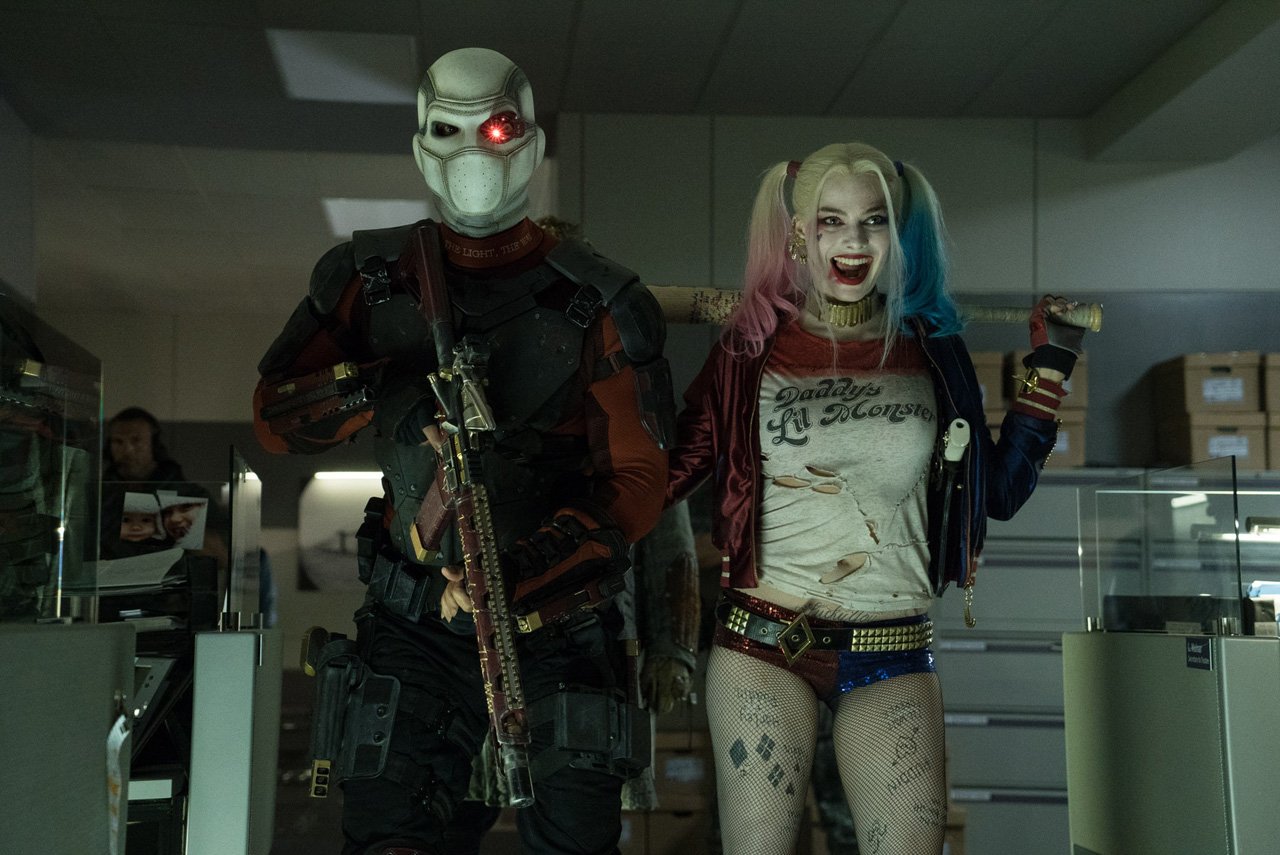 Will Smith is actually pretty great as Deadshot, reminding everyone how he became such a big movie star with his combination of flippant humour and action star badassery. Viola Davis cuts quite an imposing presence as Amanda Waller, a government bureaucrat just cold and vicious enough to intimidate a gang of gimmicky comic book baddies. Margot Robbie clearly has a ball playing the irrepressibly naughty and childlike Harley Quinn, doing the now iconic role justice despite her ludicrous sex doll outfit. Jared Leto is fine as the Joker, even if his costumes and tattoos never cease to be an eyesore. He essentially apes Heath Ledger’s Joker voice and then defines the rest of the performance through vamping and as much acting as the screen can contain. It’s an amusing enough take on the clown prince of crime, but to be honest, he appears in the movie so infrequently and ultimately so inconsequentially that he doesn’t get much of a chance to really develop the character. He’s just a collection of recognizable Joker ticks without much new to offer beyond some stupid fashion choices. There are plenty of other actors and characters in Suicide Squad (too many to be honest), but they all end up feeling more like background props and plot devices than anything else. Even Batman’s handful of appearances feel perfunctory. The character’s gotta be there to sell tickets for this and future DC movies, not because he adds anything beyond iconography. 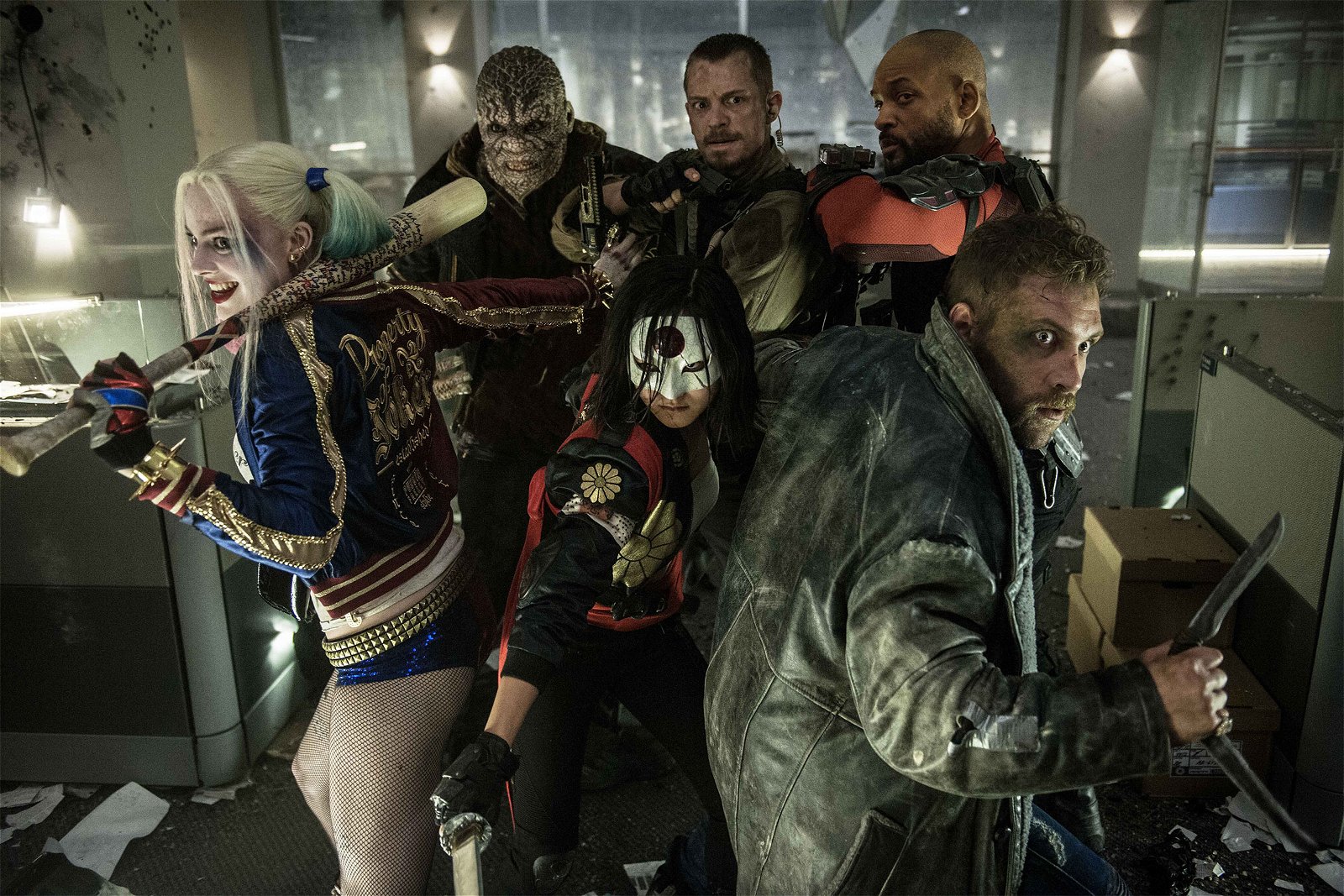 So, there’s certainly some fun to be had watching talented people bring B to D level DC bad guys to life. Even if David Ayer was too rushed and controlled to deliver whatever the hell his initial vision for this movie was supposed to be, there are enough strong sequences to make up for the stinkers and sloppy narrative. The tone slingshots between gothic darkness and cartoon silliness without rhyme or reason, as much a result of editorial tampering as specific filmmaking choices. It’s all over the place, and the posturing production design and costuming certainly doesn’t make any more aesthetic sense in motion as it did in irritating preview photos. In a weird way, Suicide Squad almost feels more like a feature length trailer to a far better, longer, and more cohesive movie than an actual stand alone film. You get rushes of joy and encounter imagery and characters that you’re anxious to see more of, all without a satisfying payoff to make it worthwhile.

I suppose Suicide Squad works as a quick hit entertainment rush for those with low enough standards, which is  the minimal requirement for summer blockbuster entertainment. So it could be worse. The trouble is that Suicide Squad had the potential to be better than a movie that appeals to the lowest common denominator. It’s hard to tell who specifically is to blame for the movie’s sloppiness, probably a variety of people on a variety of levels. But this definitely isn’t the dark horse surprise that proves WB/DC’s comic book universe is on track. If anything, it’s further evidence that Zack Snyder and co. rushed into this thing without much of a plan. Hopefully the studio is able to right the ship, because at the moment this grand Marvel Studios aping experiment is starting to feel like the worst case scenario that everyone feared it might be many moons ago.

Well, Suicide Squad is certainly a big mess. But at least it’s kind of a fun mess. 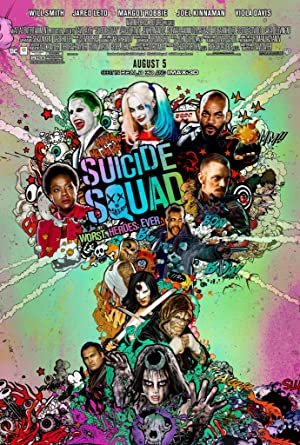