It’s been some time since Gail Simone has written a book for Marvel Comics or an ongoing superhero series for that matter, but thankfully this week’s Domino #1 marks her long-awaited return. This series focuses on Neena Thurman, a sharpshooting mercenary with a sordid past and this issue promises the return of a couple beloved Marvel characters.

Gail Simone has a knack for telling humour infused, genre-pushing stories that also feature a surprising amount of heart. She also has a knack for writing antiheroes, as shown through her masterful run a few years back on Secret Six. Below is a panel from that book.

This book also marks the first time that Domino has helmed an ongoing series and while she has been a member of the X Force, she really hasn’t had a seminal story that focuses on her. With Simone at the helm that could soon change and this issue is a great jumping on point for new readers as well as a must-read for fans of humour infused comics.

Captain America has long been a man out of time. The fact that he lived in the 1940’s and is out of place in modern day life has been a staple of his characterization for the past decade. The problem is that in that time there have been hundreds of stories that take place in a modern setting and as a result, Captain America hasn’t felt like a hero out of time in a while. That is until now.

In this week’s issue #700 Cap wakes up from a block of ice yet again, but this time he wakes up in a post-apocalyptic future that is nothing like the era he’s grown used to. This story seems like one of those rare occasions where an anniversary issue actually has a significant and important story to tell and this comic should provide a number of great moments. This issue also contains an untold tale from Captain America’s past, written by Mark Waid and featuring the artwork of deceased comics legend Jack Kirby. I’m not sure how Marvel managed to work that one out, but regardless it’s most certainly worth checking out. 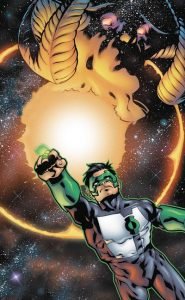 For my money, Brian K. Vaughan is one of the best comic writers of this millennium and perhaps ever.  The creator behind such seminal comic books as Y: The Last Man, Pride of Baghdad and most recently Saga, has made a career of working on non-superhero books but there was a time when he was one of the hottest writers in superhero comics as well.

This collection is a bit all over the place in terms of characters and storylines as it features Vaughan’s work from TITANS #14, SINS OF YOUTH: WONDER GIRLS #1, JLA ANNUAL #4, GREEN LANTERN: CIRCLE OF FIRE #1-2, GREEN LANTERN/ADAM STRANGE #1, GREEN LANTERN/THE ATOM #1 and a story from YOUNG JUSTICE #22.  That being said, if you’re a Brian K. Vaughan or someone who enjoys top tier superheroics then this is the perfect collection for you.

New Superman and The Justice League of China #22

There are a heck of a lot of superhero stories on the Best Comics List this week and while New Superman #22 is technically a superhero story it is unlike any other book on the stands today. New Superman delves into border politics in a thoughtful and engaging way and this current story arc is a perfect representation of this.

This issue promises to bring the Aqua-Man of North Korea story arc to a close and this book has had a knack for telling politically relevant stories in a positive, and oftentimes violence free-way. This issue uses the tagline of “sometimes villainy is only a matter of perspective” and that’s an intriguing and wholly relevant sentiment to consider in any political climate. That being said, while this book does feature a fair share of politics it is first and foremost a fun superhero story with an endearing and fallible main character which is a rarity in mainstream superhero comics. 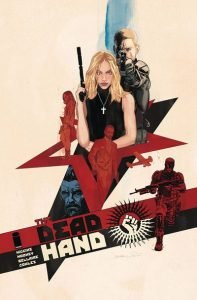 The only non-superhero book on this list, Dead Hand #1 makes the cut because of its stellar creative team and cold war infused story. This series tells the story of a retired Cold War operative named Carter Carson who discovers a secret at the end of the war that not only changed his life but also altered the course of history. Now, an evil organization known as Dead Hand has risen again and the only thing standing in their way is the relationship between an old spy and a little boy.

While this series runs the risk of being generic, given the amount of cold war spy stories that have already been told, the fact that Kyle Higgins and Stephen Mooney are the creative team behind this book suggests otherwise. Mooney has drawn a number of espionage based stories over at IDW and expressive pencils should be perfect for this series. Higgins has shown in the past an ability to write espionage tales as well as stories filled with heart. His recent Nightwing: The New Order miniseries tackled the idea of superhero registration and a view of superpowers in a similar light to that of communism in North America during the Cold War. Also, I’d like to point out that Dead Hand is a wonderful name for an evil cold war espionage group and worth the price of admission alone.

Liked this article and want to read more like it? Check out our interview with Howard Chaykin and Last Week’s Best Comics to Buy List.