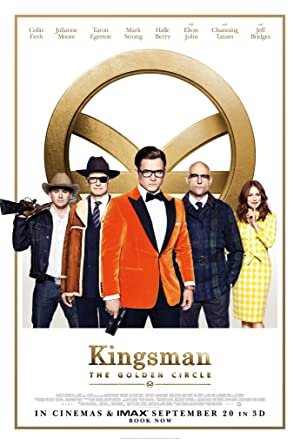 Kingsman was one of the few original blockbusters released in the last five years that actually seemed worthy of a sequel. Brilliantly adapted from a Mark Millar comic book, Matthew Vaughn created a tongue-in-cheek twist on James Bond tropes that somehow made goofy Roger Moore era spy games feel relevant in the 21st century. By the time the ultraviolent cartoon ended on a bad taste bum joke, it felt like a whole franchise could naturally spill out with little effort. Unfortunately, the follow up Kingsman: The Golden Circle doesn’t quite hit the mark. Oddly, it’s not because Vaughn and his co-writer Jane Goldman were running low on ideas of what to do with the series. If anything, they had too many good ideas and delivered a screenplay filled with wonderful scenes and characters that never quite add up to a satisfying whole.

Part of the problem might be that after transforming star Taron Egerton from a street punk to a refined superspy, there wasn’t much left to do with the character. He’s grown as much as he can and is now in Bondian stasis. So the filmmakers compensate by having a bunch of stuff happen around him to force him into action. For one thing, The entire Kingsman organization is destroyed (except for scene-stealer Mark Strong) forcing Egerton to head stateside to work with the American Statesman, a group of classy cowboy spies led by Jeff Daniels, Channing Tatum, Halle Berry, and a whole bunch of culture clash jokes. The villain is Julianne Moore as a druglord who killed the Kingsman as part of a larger plot. She’s poisoned a vast portion of the world’s illegal drug supply to hold the world ransom to legalize drugs or let all users die. Oh and Colin Firth’s dapper spy mentor isn’t actually dead either. He’s just got an eye patch and some severe amnesia to get over.

Yep, there are a bunch of loosely connected subplots and characters bouncing around this sequel, far too many for it to contain. Despite what the trailers suggested, The Statesman are more of a distraction than anything else, with their famous players pretty much limited to extended cameos (what a waste). The amnesia plot is just as time-consuming and corny as it sounds, with no amount of winking humour able to elevate the cliché. Egerton basically bounces from one set piece to the next with only a single note to play and little to do beyond kick butt and solve script problems. Any attempt to reach for deeper emotions or empathies tends to fall flat since it’s so clear this is all one big joke and not one that’s funnier the second time.

Still, while all those problems are real and distracting, it doesn’t mean there isn’t plenty of fun to be had. Julianne Moore is absolutely delightful as a giddy Bond villain who carries out her evil plots with rational thought and a smile (which somehow makes her scarier). Vaughn stages the action scenes just as expertly, occasionally leaning too hard on jittery fake-long-takes, but for the most part providing gorgeously goofy and elaborate cartoon action with a style and grace more blockbusters could use. There’s a fantastic extended role for Elton John that gets more laughs than almost any more obvious comedic performance this year. The new spy toys and gadgets are fun. Production values are ridiculous. The flick never slows down. It gets so much right and yet it never quite clicks.

There’s just something about Kingsman: The Golden Circle that feels almost inexplicably stale. What once seemed like a promising new direction for Bond-style spy games now seems like a dead end of diminishing returns. Maybe this subgenre has just run its course (certainly even the ironic chauvinism feels uncomfortable this time) or maybe Vaughn and Goldman tried to do too much rather than coasting on the formula they established. It’s hard to pinpoint exactly what went wrong, but plenty did. Plenty went right as well. So if you adored Kingsman then the sequel is still very much worth watching. It’s just a shame that this franchise managed to flame out on chapter two. Oh well, at least that means Matthew Vaughn can move on to something else now and given his track record for anything other than sequels, that’s exciting.

Liked this article and want to read more like it? Check out Pill’s take on mother! and It!

Something feels off in this Kingsman follow up. There many wonderful moments, but they rarely add up.
REVIEW SCORE
6.5
File Under: