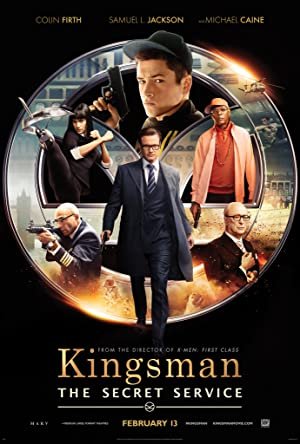 A couple of years ago we all celebrated James Bond’s 75th anniversary with Skyfall, a delightful romp through the iconic superspy’s long history with one foot in winking homage to the past and one foot in the gritty post-Nolan blockbuster future. It was a great Bond flick and an even better moment in the nerdy realms of Bond history. And yet, on a certain level, Matthew Vaughn’s Kingsman: The Secret Service is an even more satisfying forward-thinking homage to everyone’s favorite MI6 misogynist. For one thing, all of that dour Jason Bourne-ification of the Bond mythology is gone. The name and the martini might not make an appearance, but this love letter embraces all of the goofiest aspects of the series while lovingly pissing all over it. As a work of naughty and knowing R-rated spy fun, this is about as good as glossy Hollywood entertainment gets.

The titular Kingsman are a super-secret organization of super-dapper British spies. You know the type: their suits are immaculate, their Oxford educated vocabulary exquisite, and their skills with dispatching a baddie or bedding a lady are unparalleled. Of course, such an organization would have no purpose without a supervillain and a dastardly plot to foil. So we get that too in a lisping Sam Jackson playing a dot com billionaire psycho with a bizarre world domination plot and a colorful henchwoman (sporting running blades that give new meaning to the term). Of course, the nature of that plot must be kept secret until the third act. So while the dependably dapper Colin Firth slowly works out the details for his superior Michael Caine (obviously, especially given Sean Connery’s retirement), we’re also introduced to a new recruit. With a Kingsman freshly killed in the early going, there’s an opening for a new agent and Firth picks up the lower class lad’s lad Eggy (newcomer Taron Egerton) to fill the role. Along with a handful of competitors, Eggy dives headfirst into death-defying training. Eventually all roads lead to a hidden evil layer with uniformed henchman, though thankfully director Matthew Vaughn ensures that audiences get exactly what they want through ways they wouldn’t necessarily expect.

Vaughn (along with writer partner Jane Goldman and comics guru Mark Millar) have been down this sardonically sincere road before. It’s impossible not to think of their last three-headed collaboration Kick Ass as all the madness unfolds. That’s not to say that the gang are repeating themselves by any means, just that they’ve found a way to bring a striking aesthetic to a genre that needs a kick in the pants even more than superhero shenanigans. As sincere as Vaughn and co. are in their unapologetic love for secret agent globe-trotting and gallivanting, they are also acutely aware that it’s old timey entertainment in need of an upgrade. So they mock the well-worn conventions of the form while conforming to them and the sick comedy tone employed is perfect for it. In particular, Vaughn has a knack for crafting nasty cartoon action sequences that truly shines here. In one viciously thrilling scene, he has Firth brutally murder more people in a church than anyone would have assumed the Pride And Prejudice star would tally up over his entire career. Then in the climax, Vaughn turns the sight of exploding heads into a twistedly funny fireworks display. There’s an edge to the film’s approach to ticket-shilling action, walking a fine line between gentle subversion and goofy crowd-pleasing that’s not easy to achieve. For anyone with a sick sense of humor and a sweet tooth for mainstream entertainment, the magical mix of Kick Ass has been revived.

It also doesn’t hurt that there’s one hell of a cast bringing it all to life from stalwarts like Caine and Jackson perverting their iconic images, Taron Egerton bursting onto center stage with style, Mark Strong doing his chameleon thing, Mark Hamill doing his in-joke cameo thing, and above all else Firth inverting his image in ways that just might expand his career if he feels so inclined. For genre nuts and graphic novel nerds (the film stays close to Millar’s original book while also redefining itself as something new), Kingsman is a dirty delight to cherish. However, it would be a lie to claim that everything plays out perfectly. The hodgepodge of satire, parody, homage, light social commentary, and dense spy plotting leads to lumpy structure as often as an unpredictably wild ride. The filth-friendly humor quite often dips too far into bad taste. And all of the nerdy winking keeps audience investment too distanced for much genuine emotion or empathy. Ultimately, it’s all one big party trick at James Bond’s expense made by a filmmaker indulging in the fact that he strung together enough hints to get Hollywood to finance his wildest flights of fancy with little concern for conventional entertainment. However, if that sounds like an in-crowd party that you want to join, I can’t recommend seeking out this sardonic spy silliness enough. It’s easy to complain about the over saturation of brainless, boring, blockbuster fluff, but every so often a big middle finger to tasteful entertainment like Kingsman sneaks through the cracks to remind us all why that industry is worth keeping around.