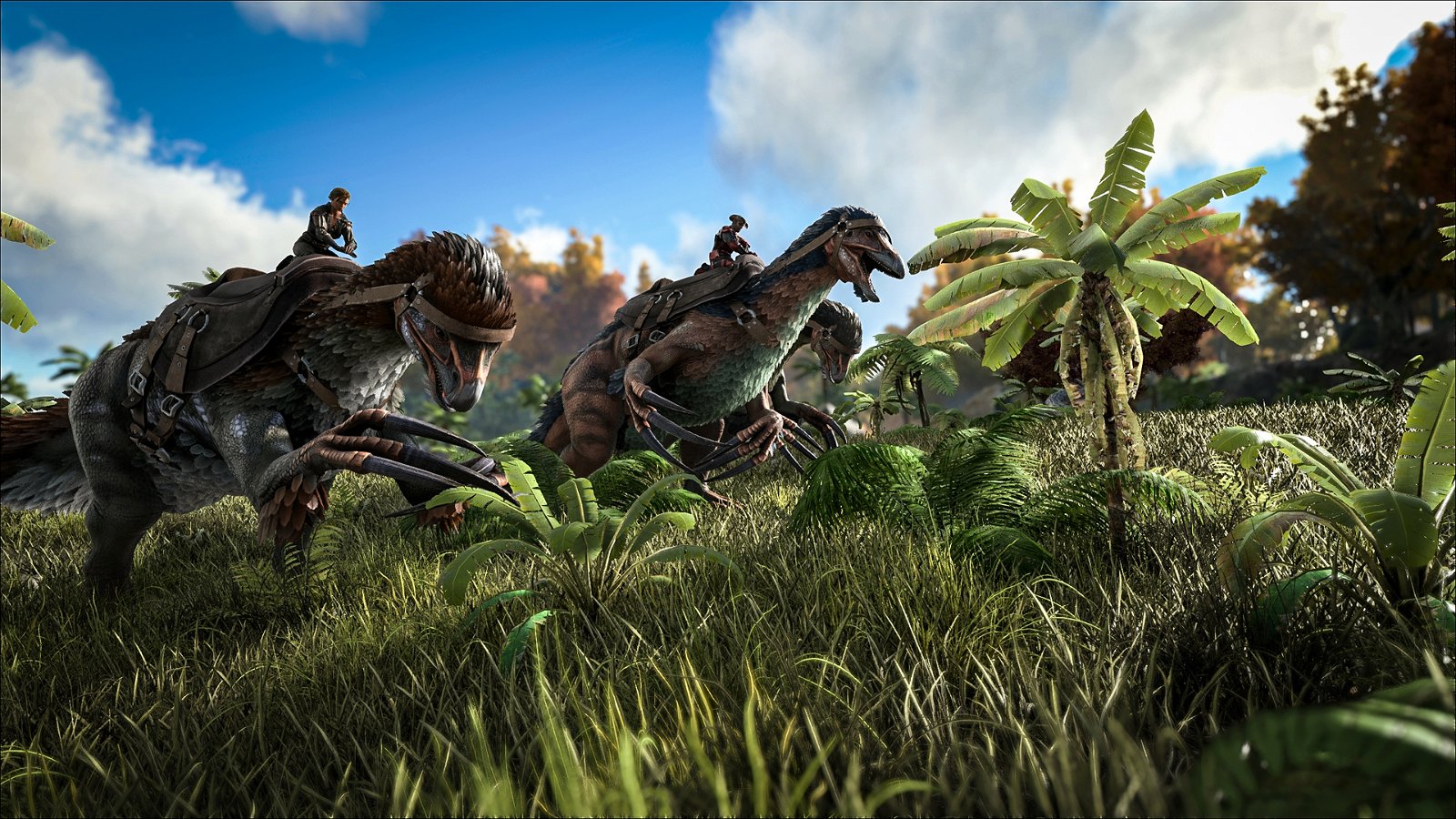 Ark: Survival Evolved still feels like an Early Access game. The game is (ostensibly) a completed release, in that it hit 1.0 as of this review and you are now expected to pay $60 for the privilege. But it still lacks that certain level of spit-shine you would expect from a full priced release, right down to multiplayer that doesn’t quite work & a suite of mechanics that are either completely broken or utterly incomprehensible and I’m not sure which is worse. I suspect I would have a terrific time playing Ark with my friends, but I can’t ask them—nor anyone else—to pay retail price for this game.

The game takes place in three different settings: an island, a desert, and a fantastical flying island. Each bio-dome is packed with dinosaurs and other kinds of prehistoric animals, although the last two have supernatural creatures like rock elementals and direwolves. The islands are the easiest, but I found the desert’s difficulty more rewarding, even though I never quite got those rock elementals to spawn.

If you’ve played an open-world Early Access survival game (see also: Minecraft, Rust, Don’t Starve, Terraria, Starbound, H1Z1, Day Z, Rokh, No Man’s Sky, Hellion, Stranded Deep, Beasts of Prey, Dead State) then you know what Ark: Survival Evolved is all about. You punch trees with your fists to get bundles of wood, you pick up some rocks, you build a pickaxe, you use the pickaxe to get better materials, so on and so forth. It’s a series of little victories and small steps, which is supposed to culminate in an endgame where the player feels like the God-King of the universe.

The endgame mostly focuses on fighting giant monster spiders with assault rifles, but the problem with the survival loop is that said endgame always feels miles away. I spent most of my time in Ark: Survival Evolved trying to find the best climate for my home base, in part because the primary map’s weather system was completely nonsensical. There were times where I was standing on a beach, and the game told me it was too hot. I took a few steps to the right, and the game told me it was too cold. These status ailments affected my character’s water and food levels respectively—both of which already drain too quickly—which keeps the player shackled to regular sources of food and water.

Every crafting item requires a sizable amount of resources, and crafting recipes are locked behind the player’s level progression, so most of Ark’s higher-level mechanics—like farming—are relegated to much later in the game. High-level predators roam parts of the island earmarked as “easy,” taking out the player in seconds and guarding the dropped items, forcing players to start from scratch. Equally high-level piranhas stalk the rivers, keeping players away from water sources & forcing long treks around…which also drains the player’s water and food.

Yes, there’s a lot going on in Ark: Survival Evolved, often to the player’s detriment. The single-player is a constant war of attrition rather than a tightrope walk between success and failure—which is generally not “for” me. I’m mature enough to admit that much, which is why I took advantage of the game’s built-in admin console right around the time I started violently cursing all raptors who have ever lived. I am extremely happy for the addition of console commands in PS4 games, especially when they let me skip the parts of the game I don’t like (the accursed, horrible raptors) in favour of the parts I do (harvesting resources). That, along with incredibly modular difficulty, gave me the freedom to play the game however I chose, rather than smothering myself in hours of limp, uninvolving combat.

For me, Ark’s main hook is not its single-player campaign, it’s the game’s multiplayer component. In theory, up to 60 players can enter a map and wreak any kind of havoc they want, or you could host your own server and invite your friends. You can choose between the first island or the desert, as well as player vs. player or player vs. AI. I fantasized about inviting my friends to a game of Ark: Survival Evolved, only to trap them on an ultra-difficult island where I am all-powerful thanks to the admin console commands. They would have to fight for their lives against horrific man-eating lizards and me, the virtual equivalent of a very low-stakes Jigsaw Killer.

I did give PvP a try, which started off well enough. I scrambled around the beach where I spawned, hoping to put together enough tools to keep me safe in a hostile environment. It was tense as hell until I realized from the context in the chat that everyone else on the server had no interest in hunting me down. Then, a couple of level 120 miniature raptors ate me alive, which seemed as good a sign as any to stop playing on that server.

After trying a second server, I spawned into a world where the framerate was in the single digits and the textures didn’t properly load. That was the first technical problem I encountered in Ark: Survival Evolved, followed shortly by the game displaying inaccurate server ping, displaying inaccurate controller mapping, and preventing me from taming any dinosaurs by disabling their inventory. Once, I saw a crocodile spawn into the world by literally falling from the sky and bouncing off the ground.

The apex of Early Access weirdness was a problem I noticed across all three maps after playing a couple games on the desert map. See, whenever the player mines a tree or rock or similar resource to completion, it breaks and disappears. But after playing keep-away with some feathered T-Rexes in the desert, every resource I farmed exploded into grey textureless shapes before plummeting through the earth.

Even the parts of the game that work still feel unfinished. The menu system and controls are clearly ported over from the PC with little consideration for controllers, and bear a disquieting resemblance to the menus from the launch version of the game. When the textures deign to load, they look ugly as sin. Dinosaur riding is clunky and unintuitive, with movement split between the left and right sticks. Ark: Survival Evolved just isn’t ready for prime time, and it (unfortunately) reinforces the idea that games often release in an unfinished state.

There’s room for Ark: Survival Evolved in the Early Access survival space, in part because every aspect of the game is very modular and has plenty of dedicated servers. There will be a version of Ark that caters to your tastes. But every version of the game uses the same playbook, so if you’re not down with the core mechanics or if you can’t get past some Early Access jank, I don’t think you’ll enjoy this game without a dedicated group of like-minded friends.

Ark: Survival Evolved is a half-baked game that still isn’t worth full price.