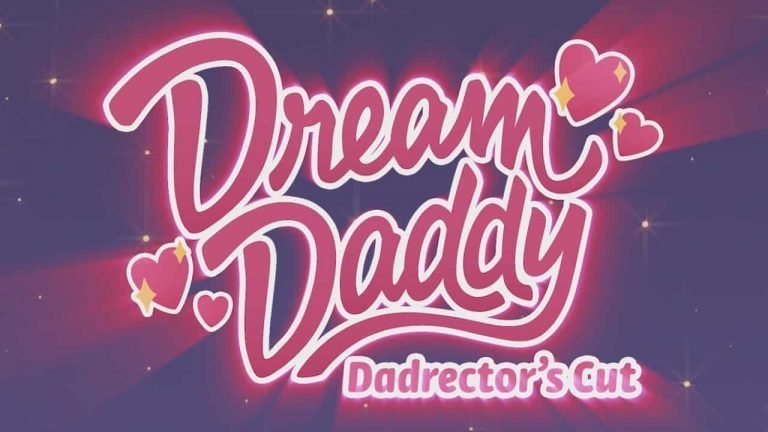 I’ve written a lot about Dream Daddy: A Daddy Dating Simulator over the past year. I don’t think there’s a game with which I have a more complicated relationship. At its best, it’s a wholesome, genuinely funny look at fatherhood and brotherhood. But at its worst, it’s a heteronormative portrayal of gay intimacy with a severe lack of romantic tension. The Dadrector’s Cut, with brand new content and previously inaccessible scenarios, leans harder into the best parts of the game. But despite new friendship and fatherhood-focused side stories, it doesn’t outweigh Dream Daddy’s poor follow through on its own name: dating hot dads.

As I discussed in my original review, Dream Daddy’s seven romantic stories are of varying quality, and almost all of them suffer from a severe lack of romantic foreshadowing, coming off platonic, both passively and actively. Conversations with both your suitor and your daughter about that person are almost always written in a friendship context up until their final moments where there’s an acknowledgement of romantic interest. That hasn’t changed in the Dadrector’s Cut. Thankfully, what is new is more focused on the camaraderie of the neighborhood dads rather than force love stories.

The Dadrector’s Cut adds a chat function to the game’s “Dadbook” social media platform which originally only acted as a place to initiate dates. These chats come from almost any of the dateable dads, but are exclusively platonic and don’t contribute to any one dad’s romantic route. Things like playing poker with all seven dads at once, going to a museum with the more cultured of the group, and taking part in a daughter-led tea party underscore what Dream Daddy has and continues to nail: fatherhood. There’s so much heart to the way Dream Daddy portrays fathers, both with and away from their children, and it’s where its writing has always shined in the face of poorly executed romance.

In replaying Dream Daddy and reading the comic series based on it that’s currently running, it’s impossible for me to deny how often the series has made me smile and tugged at my heartstrings. Seeing characters like Robert, who plays the role of the bad dad, but is probably the single most caring man in the neighborhood, or Craig learning to take care of himself alongside his children and Joseph’s arc being a subversive romance when it could have easily given the player a power fantasy ending are proof that Dream Daddy is more than capable of meaningful stories on a more human level than its premise might suggest to an outsider. I just find myself bothered it had to use gay romance as a crutch when it never had to. If gay romance and queer identity weren’t something Dream Daddy could naturally include in its stories, I would have rather it never bothered with it in the first place. The stories Dream Daddy tells were strong enough on their own that it didn’t need to be a dating simulator, and because it tries to do both and fails at one, it puts weight on the series’ shoulders it can’t carry.

Dadrector’s Cut gives a little bit more spotlight to what Dream Daddy does well but doesn’t undo what the game has never been able to get right.
REVIEW SCORE
6.5
File Under: Dream Daddy, PlayStation