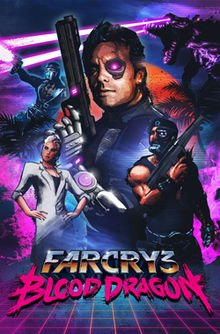 Are You Ready For The Rad-ness?

The typical kind of DLC gamers expect now is pretty pedestrian; some new skins for characters or weapons, or if you’re really lucky, a new, bite sized adventure that carries on the shenanigans of the core game that was originally purchased. Ubisoft however, have done something unusual; the latest add-on, downloadable content to last year’s Far Cry 3 has absolutely nothing to do with the game, but is instead a standalone, retro/pastiche/homage to 80s game, film and general pop culture that anyone can buy. It’s still the exact same engine used in Far Cry 3 but now with its tongue firmly in cheek as it satirizes the decade that gaming comes from. So the big question is, is it worth your $15 or 1200 MS points?

Cheese Is My Business & Business Is Fair To Middling

Far Cry 3: Blood Dragon asks gamers to dial the wayback machine to the S/NES era of games, when the distant future was 2007 and mutually assured destruction via global nuclear war was not an “if” but a “when.” Cyber Commando Rex Power Colt and his tech/ninja partner are out take down a former elite military commander gone rogue along with his unit. Clichés aplenty ensue as the game self-consciously pokes fun at the 80s and gaming conventions such as intrusive tutorials.

Blood Dragon is the Far Cry 3 engine all souped up in a lot of neon. Graphically, it’s a lot of jungles and 80s retro-science fiction aesthetics, so the game isn’t a real looker, but that’s not the point here. The sound is quite impressive, with fairly humdrum audio effects punctuated by some authentic 80s synth that gives the game feel of a John Carpenter movie. Michael Bien steps in to provide a gravelly voiced 80s action hero complete with bad puns and ironically delivered jingoism, and the jokes run the gamut from eye-rollingly “good” to just plain awful.

That in itself probably sums up the experience of the game. People who have played Far Cry 3 already will be familiar with the mechanics as they’re all identical; chained melee kills, animal hunting, side-missions to rescue people and conquering bases all make the transition to the 80s neon era. The open world aspects of Far Cry 3 are grafted onto a simple main missions that is one long running joke about the 80s, so really the star of the show here—at least in theory—is the humor. The game is clearly aimed at people who grew up during the 80s or younger people who have in-depth knowledge of 80s pop culture, but the array of humor at play here is very much like the more recent spate of satire comedy films. It takes an approach of “throw everything at the wall and see what sticks” in terms of humor. Some jokes, like the inevitable 80s guitar laden training montage are on the mark and get a knowing chuckle, while other jokes such as the loading screen tip “A hand gun fits in your hand,” are juvenile but not particularly funny. For the most part, the humor in Blood Dragon lacks the wit or insight of something like a Tim Schafer game, or even Grand Theft Auto III: Vice City back in the day.

In the end, Far Cry 3: Blood Dragon is clearly meant to be a novelty. If you’re okay with spending $15 or 1200 MS points on a game that will run anywhere between four to eight hours (based on whether you do the open world/side mission content or play straight through the story) then you’ll enjoy this purchase. Just be aware that the jokes overstay their welcome after a while, and that’s largely due to the inconsistency of the humor. There’s nothing more awkward than a joke that falls flat on its face, and Blood Dragon does this with regularity, though it can also elicit a laugh here and there. The humor is definitely uneven, and relies almost entirely on familiarity with the 80s, but it’s not a bad game, just one targeted at a very specific—and perhaps forgiving—audience.

If you’re okay with spending $15 or 1200 MS points on a game that will run anywhere between four to eight hours (based on whether you do the open world/side mission content or play straight through the story) then you’ll enjoy this purchase.
REVIEW SCORE
8
File Under: Far Cry, FPS, Ubisoft