Shadows of the Damned (PS3) Review 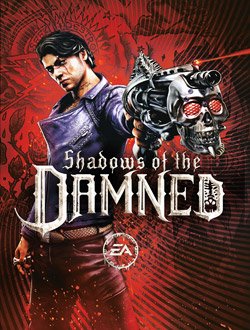 I usually try to avoid unnecessary profanity while writing reviews, but there’s only so much I can do when the protagonist’s full name is Garcia Fucking Hotspur. Then again, that should tell you everything you need to know about Shadows of the Damned. The new game from Suda51 and Shinji Mikami is essentially one long penis joke wrapped in an Umbrella Corporation prophylactic and if you’re disgusted at the mere thought of this sentence, then Shadows of the Damned probably isn’t for you.

If you are in the target audience – and if you’re familiar with the work of Suda51, you’re likely in the target audience – then Shadows of the Damned is definitely worth a look. As relentlessly juvenile as it is, the lowbrow humor seldom misfires and the game is frequently laugh-out-loud funny in a way that’s far more self-aware than the average R-Rated frat comedy. It’s also halfway decent as a game, with highly functional gameplay ripped straight out of Mikami’s Resident Evil handbook.

The setting, meanwhile, is pulled from southwestern grindhouse films like Planet Terror and From Dusk Till Dawn. You play as the aforementioned Garcia Hotspur, an extravagantly tattooed Mexican demon hunter who’s a little too good at his job. He’s killed so many demons that Fleming, the many-eyed Lord of the Underworld, decides to kidnap Garcia’s girlfriend Paula. Garcia subsequently chases Fleming into hell and makes his way to Fleming’s castle with the help of Johnson, a floating demon skull/sidekick who can turn into a variety of different weapons.

So yes, Garcia’s gun is called Johnson, and the game plays that gag for everything it’s worth. Checkpoints are provided courtesy of a defecating demon named One-Eyed William, drinking alcohol restores your vitality, and your pistol is dubbed the HotBoner, although the sexuality isn’t particularly threatening despite the unapologetic lewdness. The heroes (and even the villain) are overcompensating caricatures more than characters, and they’re all willing to mock those adolescent obsessions and imperfections.

The core creative concepts are otherwise fantastic. The demons are bloody and grotesque, the levels are eccentric (there’s a wonderful homage to Evil Dead), and the Spanish guitar soundtrack from Silent Hill veteran Akira Yamaoka perfectly captures the tone of the game. There aren’t any particularly haunting images – this is slasher horror, not psychological horror – but the game is undeniably deranged, as evidenced when Paula gets ripped to shreds and resurrected at the start of seemingly every chapter. There are also some pulse-pounding moments made possible thanks to the claustrophobic level design that isn’t afraid to stuff powerful demons into narrow rooms and corridors.

Next to that insanity the control scheme seems relatively unremarkable, but it is competent and boasts all of the over-the-shoulder third person features you’d expect from Shinji Mikami. Shadows is more action-oriented than some of Mikami’s survival horror work – you can move while aiming, you have to know how to dodge, and there’s more than enough health and ammo to go around – but the combat emphasizes accuracy and skill even if the cone of effect for the shotgun is always narrower than you think it should be.

With that in mind, Shadows of the Damned is not a game for novices. The difficulty curve can be brutal, and many of the tougher enemies – including most bosses – will only expose their glowing red weak spots for a few of brief seconds before retreating into their armor. You need to be able to act (and aim) incredibly quickly, especially once darkness descends and saddles you with a de facto timer in the middle of a fight.

That darkness is one of the game’s other gimmicks. The world occasionally becomes shrouded in a malicious black cloud that consumes human flesh, so you’ll either need to escape or find some way to illuminate the terrain. The most frequent solution is a goat head – they’re a source of light in the underworld – although fireworks displays can provide a temporary reprieve. Monsters are invulnerable while they’re in the darkness, and they’ll be coated in the stuff even after you shine some light on the environment.

You’ll need to hit enemies with bursts of light to dispel the darkness, and the ability to stun victims adds another dimension to combat. The same cannot be said of the largely token upgrade system for the three main weapons. You need to make a major investment before you’ll start seeing any gameplay benefits and the most challenging/irritating set pieces expose you to one-hit kills that completely negate anything in your arsenal.

Of course, that’s always been the trouble with Suda51. For every brilliant design idea, there’s at least one perplexing decision that seriously tests your patience. A 2D shoot-em-up interlude with aggravating enemy spawn points gets needlessly repeated three times and the game develops a hard-on for the final shotgun upgrade later in the game. You’re forced you to play pointless carnival games reminiscent of Skee-Ball with explosives, and it’s not much fun when you have to do something half a dozen times.

You simply have to be willing to take with the bad with the good in order to appreciate Shadows of the Damned, which defies description with Suda51’s unique brand of weirdness. No other game director so fearlessly juxtaposes mutilated demons with the brightly colored neon of a Vegas strip lined with brothels and when Garcia’s blasting giants with a six-foot cannon while screaming, “Taste my Big Boner,” you know you’re getting a sequence that will not appear in any other game this year.

Unfortunately, the niggling grievances pile up and eventually make the game feel like a bit of a letdown. It’s not as consistently frenetic as No More Heroes or as well paced as Resident Evil 4, and the mundane task of survival often overshadows the creative chaos while long loading times and poorly explained puzzles distance you from the experience.

Numerous technical issues further compound those problems. The game chugs whenever it tries to load or auto-save – Garcia sometimes waits a few seconds before popping into a new locale – and I even encountered a strange bug after beating the game when I inexplicably lost the ability to navigate menu screens with the analog stick. The game noticeably lacks polish, and that’s what makes Shadows of the Damned so frustrating. It has all of the elements of a game that I should love, but the pieces never quite come together, like fragmented jigsaw puzzle depicting a nude version of the Mona Lisa.

So while Shadows of the Damned doesn’t feel like anyone’s best work, it’s still good work and that’s worthy of attention when you’re dealing with singular talents like Shinji Mikami and Suda51. If those two names pique your interest – or maybe if you’ve got an insatiable appetite for penis jokes – you just might find yourself enjoying Shadows of the Damned.

It has all of the elements of a game that I should love, but the pieces never quite come together, like fragmented jigsaw puzzle depicting a nude version of the Mona Lisa.
REVIEW SCORE
8
File Under: Action, PlayStation, Suda51, Thriller