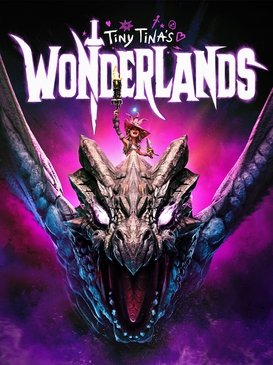 Many people questioned the launch of Tiny Tina’s Wonderlands, thinking it was just going to be a Borderlands DLC. Many of the search terms surrounding the action game question whether it is a standalone game. I’m here to say it is, and it’s a damn good one at that. Combining parodies of RPG tabletops, with the style and universe of the Borderlands franchise, the game comes out strong, and remains engaging and entertaining throughout.

The story follows Tiny Tina—voiced flawlessly by Ashly Burch (Horizon Forbidden West and Horizon Zero Dawn)—a teenage NPC from past Borderlands titles, Borderlands 2, Borderlands: The Pre-Sequel and Borderlands 3. She is loud, she is brash, and she is fun. If you didn’t love her character in the past games, Tiny Tina’s Wonderlands may be a little much for you. I could see her character bordering on obnoxious for some, but I was all in and loving the immature quips and all around boisterousness of her character.

In the game, you are introduced to Tiny Tina, Valentine (Andy Samberg) and Frette (Wanda Sykes), and you’re the fourth player—The Fatemaker—in a rousing RPG tabletop game, Bunkers & Badasses, with the goal of defeating the Dragon Lord (Will Arnett). They often break the fourth wall, “Oh come on, their figure isn’t even fully painted”, and it makes for hilarious banter back and forth between characters while still keeping you involved.

Obviously, with a voice cast like this, there is bound to be humour. A lot of it is silly and juvenile. For instance, a unicorn character named Queen Butt-Stallion, but they do it in a way that works. I actually likened it to the voice acting and script in the Fable series. I found a lot of similarities between that and the comedy in Tiny Tina’s Wonderlands. Again, this is something that could be too much for some, but for me, it was just right.

Even the in-game instructions follow the same line of silliness. Jumping into Tiny Tina’s Wonderlands, you can choose a difficulty, Relaxed, Balanced, or Intense, with the Relaxed text reading “You’re here to chill with the little imaginary people that live in your screen and save the whole dang world while you’re at it.” That sort of tone remains throughout every aspect of the game. From here, you choose Cooperation or Competition, determining how your loot will play out if you are in a multiplayer game. You’ll either divide the loot amongst yourselves, or find your own.

Tiny Tina’s Wonderlands has plenty of options for choosing your class. I played a Stabbomancer for my first playthrough, focusing on stealth and blades, though there is still full access to guns and magic throughout the game. I enjoyed the Stabbomancer, as the Ghost Blade skill proved very useful against ranged enemies. There are six classes to choose from in total. A Clawbringer, which is a Wyvern-tamer focusing on flame and lightning damage; a Spellshot focusing on magic and spell damage; a Graveborn that traps souls and spends health to deal damage; the Spore Warden with a cute little mushroom companion that focuses on ranged damage, and the Brr-Zerker that does the smashing damage with a focus on frost.

After your class choice, you’re presented with the character creation menu. I’m convinced you cannot create a “pretty” character in this game, so I chose to go a more aggressive route. The game is inclusive, allowing you to select “This One” or “That One” for your character, rather than male or female, and choose your own pronouns, They/Them, She/Her, or He/Him. The voices are labelled gender-neutral as well, like Gallant A/B, Clever A/B etc.

The character design in Tiny Tina’s Wonderlands is somehow both vast and limited. For example, the hairstyles leave something to be desired, as there aren’t many, and they are all fairly short, but there are over 15 skin colours available. You have plenty of customization options for armour designs and colours. Your eyes, nose, mouth and ears are also all adjustable, with the ability to turn off symmetry, meaning each eye could be different.

As a Stabbomancer, I can switch between the Ghost Blade and—after level 7— the Shadows abilities freely, but every point I put into my skill tree after that affects both skills. The earlier points mainly impact damage and duration of weapons and status effects, so you’re pretty safe to pour into whatever you want here. Once you reach the bottom half of your Skill Tree, you will need to be a bit pickier. In my case, I needed to decide if I wanted to focus more on stealth and mobility, with things like Evasion and Melee Crit Damage, or pure power, like Fire Rate and Spell Damage.

Gameplay in Tiny Tina’s Wonderlands is fast, skeletons—even badass ones—and assassins come at you quick, from every angle. This is where I can see the multiplayer aspect of the game coming in handy, with someone to watch your back at all times. You can play with up to three other players, though I wasn’t able to test this too thoroughly, as it was a test server with a limited number of players and my online connection was constantly disconnecting during testing. I suspect this will improve when the game goes live.

“Completing the tutorial puts you directly into the tabletop game, The Overworld, where you take on your own figure, moving around a map full of bottle caps and Cheetos. Stereotypical? Yes. Funny? Also, yes.”

My biggest issue with Tiny Tina’s Wonderlands is the unskippable tutorial level. It’s a decent amount of play time from character creation to completion, over 30 minutes, and though it gets you used to your skills, the gameplay is the same for each character. I prefer console gaming to PC, so I’d love to switch over to playing on the Xbox Series X, but rebuilding and replaying the tutorial over and over is a pretty tedious task.

Completing the tutorial puts you directly into the tabletop game, The Overworld, where you take on your own figure, moving around a map full of bottle caps and Cheetos. Stereotypical? Yes. Funny? Also, yes. From here, you can move from area to area, including dungeons and random encounters. There is even loot and collectibles here too. After you complete the story, you’re free head back and explore. When you do, don’t forget to check out the Chaos Chamber, a dungeon that randomizes with every run, keeping combat fresh for endgame content.

Once you’ve gotten the hang of things, there is plenty to loot and collect in each area. If you are a looter, Tiny Tina’s Wonderlands was built for you. There are chests, safes, and boxes everywhere with ample gold and ammo. There are also plenty of things to hunt down, like Rune Puzzles for loot, or Lucky Dice in each area. Stockpiling loot became a habit and my bags were constantly full until I unlocked the storage and Lost Loot.

“If you are a looter, Tiny Tina’s Wonderlands was built for you.”

I highly recommend favouriting the gear you’re wearing or want to save, as I often sold mine by mistake. There is a buyback feature, but it is limited. Lost Loot collects anything you didn’t pick up on the battlefield. Gearbox Software and 2K Games really cater to gatherers here, and I love it.

Combat in the game comes down to ranged, melee, magic and special abilities. It is pretty on par for action-adventure games. There are so many weapons to choose from that I found myself switching out my items often just to try something new, I rarely grabbed the same thing twice. Most of the ranged weapons can change how they shoot, like semi-auto to burst. This was a great addition, making the game functional for so many playstyles.

Overall, the game is very linear, but includes plenty of exploration within its boundaries. Tiny Tina’s Wonderlands has an exciting story and great script paired with stellar voice acting. Without that, the game likely wouldn’t have drawn me in as much as it did. I find myself wanting to play whenever I have a free moment, and even despite the tutorial, I cannot wait for the Xbox Series X version.

Tiny Tina’s Wonderlands brings a mystical world to life with a great dialogue and a stellar cast. Pairing all that with action-packed gameplay, Gearbox Software and 2K Games have made a must-play game.
REVIEW SCORE
8.5
Buy On Amazon
File Under: Borderlands, Borderlands3, Tiny Tina's Wonderlands