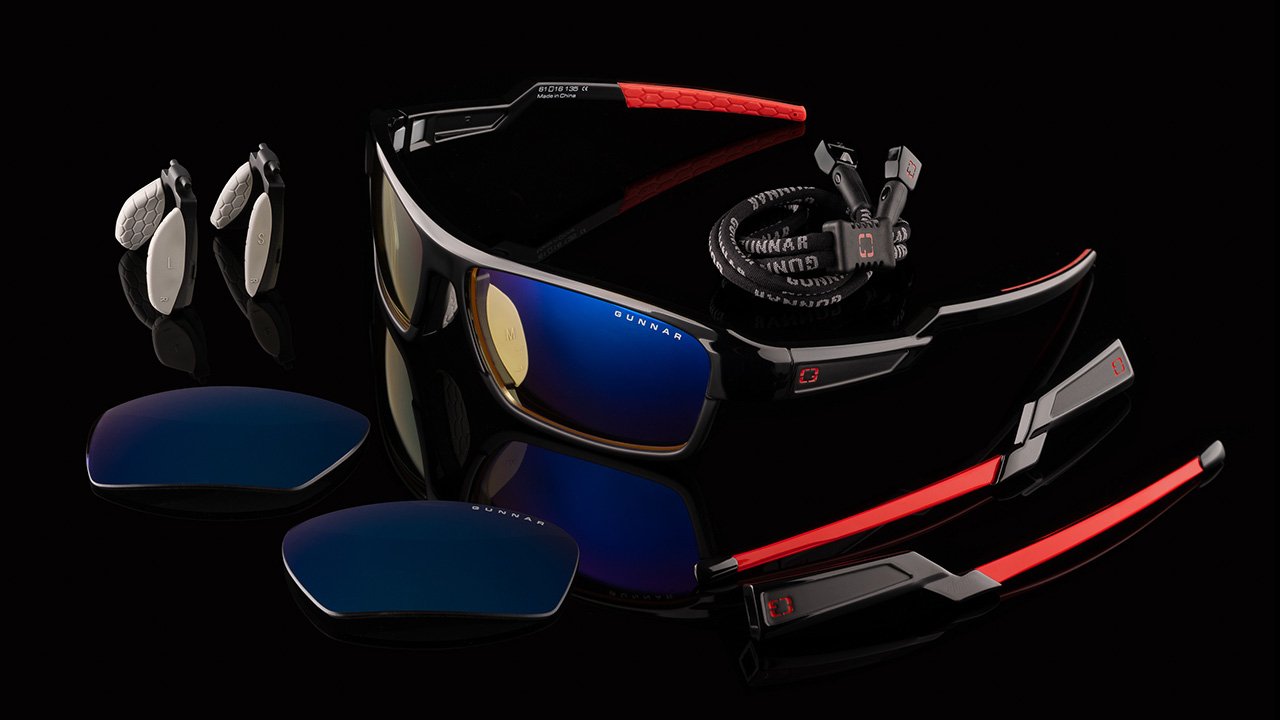 Gunnar Optiks has maintained a long-term presence with its gaming glasses for all types of players, cementing itself yet again with the versatile Lightning Bolt 360 which offers tons of accessible options and surprising amounts of customization. By giving wearers ridiculously wide options to mix and match different setting, Gunnar has also found a product that fits virtually everybody.

The Lightning Bolt 360’s are also a far cry from what the company used to offer in their earlier years. A previous CGM review back in 2014 had taken shots at the Intercept glasses for their attempts at a gaming shade which doesn’t look funny. Of course, fitting all of the technology to increase screen time isn’t easy while gamers shouldn’t have to feel like they’re wearing a Nintendo Power Glove in a crowd of knitted mittens. In 2020, Gunnar’s evolution is clearly shown in their newest 360 glasses, which sport a sleek and sharp appearance as the Lightning Bolt name goes. The build is also one of Gunnar’s sleekest appearances yet, making them shades gamers can get away with wearing outside. Satisfyingly, it feels as good as it looks too.

Right away, Gunnar’s latest gaming glasses use their own patented blue light lens. Typically, it adds yellow into your vision to reduce artificial “blue” shades coming from devices such as computers and phones. For gamers, this can help reduce headaches and a “sharpness” which can hit your eyes during long playthroughs. Of course, the war on blue light has also become somewhat common sense for modern internet users. This is where Gunnar’s Lightning Bolt 360‘s can feel a bit out of place next to the Blue Light Filter setting in most Windows, Mac and mobile devices. In fairness, gamers wearing the glasses are getting a genuine filter which can add security and block blue light concentrations directly from your eyes.

The Lightning Bolt 360‘s have done that practical effect of blocking out light across five-to-eight hour playthroughs. My eyes also felt both mellow and eased. New wearers might be a bit disillusioned at seeing greener blues but can quickly adjust after three hours tops. My nearly one-week skirmishes over writing and playing games with the 360‘s were definitely bearable around screens daily. The trade-off being a shade of yellow that is noticeable enough to know the world isn’t doused in Canadian ginger ale. To test the true endurance of Gunnar’s glasses, I sat through Peter Jackson’s 2005 extended remake of King Kong. Amazingly, the movie’s cooler blue scheme across 3.5 hours didn’t hurt my eyes as imagined. This made the 360‘s more than suitable to use for marathons of pretty much any longer than usual sitting. In short, the company’s yellow lens coating works like magic (and I’ve tried debunking it by choosing the longest, bluest film Hollywood could spit out).

But as gaming glasses, seeing moving visuals under the 360‘s were interesting over Fall Guys, Overwatch and LEGO Star Wars: The Force Awakens in one all-nighter. The marathon almost felt like a better experience with reduced eye strain in the face of some very colourful games. Long after my eyes adjusted, I still recognized the varying shades of flying beans in Fall Guys and didn’t feel compromised under Gunnar’s lens. This natural feeling continued across the week as I felt less cautious around screens. A strange blue-light habit of mines came from making concentrated faces, resulting in headaches. But I started noticing it fading away with every session and work day. This was a new form of comfort Gunnar has somehow given with frames that can change in shape and size.

I emphasize the word accessibility as a term Gunnar has kept considerably when designing the Lightning Bolt 360. Since its reveal late August 2020, the company has also delivered on a promise for the most versatile glasses to date. This is where the sleek packaging throws an entire “locker” full of interchangeable temples, a strap for poke-free wear and even a set of nose bridges to achieve a satisfying fit. Starting with the traditional temples, they rest on your ears and close up for portability. But this is where the Lighning shape of the temples wrap around your ears instead of directly sitting on them. Its feature in relieving pressure works because Gunnar had found a way to completely remove it. This is what amazed me about the 360‘s when I wore them during work and play. While the pressure is off the ears, it gave myself a bonus in using gaming headphones. While my Razer Electra V2’s were clamped down enough, the Lightning Bolt 360‘s still felt like they weren’t there as I gamed.

The thin temples were my starting point, adding the least amount of weight for the glasses. This is when the sturdy frame became heavier, leading to all the weight falling on my nose. Early on, it felt like the glasses were tilting off forward while a few light head turns and shakes weren’t enough to send the 360‘s jumping off. Gunnar’s thicker temples added the same level of comfort while they felt a bit tighter for security. Of course, I took this trade-off of feeling the glasses and felt some significant tension off my nose (and on the back of my head). During longer sessions, the 360‘s presence can become pretty distracting under the thicker frames.

First users of the Lightning Bolt 360 will be doing tons of experimentation with their builds. I absolutely loved Gunnar’s own snap-on system for temples and other accessories, with a simple grey push-down switch that is both firm and soft enough to remove things. I never had to summon the strength of Odin to violently pull off temples, making changes and tests instant with everything laid out on a table. When putting accessories on, I eased up at the sound of a click to tell me the 360‘s temples are locked and loaded. But it’s worth noting users with freshly-cut nails or none at all can find it tricky to dig in and press down on the grey switch. In Gunnar’s push for accessibility, the Lightning Bolt 360 scores extra credit for making transitions easy for wearers, knowing it’s made to be modular.

The same can be said for Gunnar’s introduction of a swappable nose rest. This is the Hail-Mary of the 360‘s, with a Small, Medium and Large type which are all included in the packaging. My nose’s wide bridge had automatically gravitated to the Medium setting and it stuck like glue. This is thanks in part to the bridge’s rubber staying firm to skin. Interestingly, it’s not the kind of rubber which can damage noses with chafing. Its one-setting-fits-all approach works well to keep most of the weight light without feeling pressured with gravity. An added bonus comes from the textures lined on the bridge rubbers which cling to your nose naturally.

It’s special way of removing the bridges comes from squeezing them and lifting them up. Without breaking them, the bridges are thick while they’re locked in a hinge. This makes swapping an easy (albeit a bit scary) process. Be careful not to summon Odin’s wrath here either, because the hinges for each detachable bridge are thin plastic which could break. But once I found my bridge, suddenly there was a rare pair of glasses which didn’t dig into my nose and leave marks or bruises after a full day.

That’s not even my favourite part of wearing the Lightning Bolt 360‘s for casual games and even streaming. Gunnar has also included a strap for wearers who don’t want to use the lightning temples, and turned the glasses into one of the most comfortable gaming glasses yet. With the strap, the 360‘s are completely secured in a goggles-type fashion. This lifted any burden for my head which generally carried reading glasses while removing pressure from over-ear headphones. I’ve spent most of my time with the straps which naturally kept the glasses on my head for a full day without distractions. Using a super-firm rubber grip, you simply put the strap around your head and pull until it falls just under your cranium. I didn’t find this too hard to do every time, but found it cumbersome from the rubber being too strong in securing the back. This is where it can be a bit of a hassle to pull on and pull off the glasses each time using Gunnar’s strap – leading me to switch back to the lightning temples for convenience over maximum comfort.

There is such thing as spending too much time with the Lighting Bolt 360‘s. Many of these moments hit me as the yellow lenses started to fog from wearing the strap. In a problem that’s plagued goggles since the beginning of time, I was forced to pause my game to move the shades further away to let air back in and de-fog. This was incredibly distracting along longer multiplayer sessions, where de-fogging the 360‘s can cost you a few kills before finding the firm-but-clear fit. The yellow and UV lenses are also a fingerprint magnet, while the plastic-like texture makes it harder for microfiber cloths to wipe them out down without a proper moisture.

Lastly, Gunnar flexes on the Lightning Bolt 360‘s casual looks by letting wearers use them outside with interchangeable UV lens. At a first glance, wearers have come a long way from looking any different with gaming glasses. I liked the effort to make the 360‘s double as sunglasses for an extra value. But changing the lenses isn’t as simple through Gunnar’s seemingly indestructible frame. The instructions to pop the lens out can be tricky if you forget to take out the nose bridge. But afterwards, the yellow lens slip off without any breaking. Though scary, I found it okay to trust the 360‘s thick components with a few changes. This is where putting a new lens gets too complicated, as Gunnar suggests going inside-out. But numerous tries have found it to be too tough. Strangely, it worked when I put a new lens outside-in.

For a casual stroll, outdoor ATV trips or sports, the UV version of the 360‘s look completely indistinguishable from gaming glasses (frankly, I don’t think the naked eye can tell they’re gaming glasses). I appreciated Gunnar’s ability to turn its accessibility up further by making the 360‘s an everyday carry for without forcing the gamer’s aesthetic. The package also comes with a handy “locker” which keeps all of the 360‘s parts and lenses together in a foam mold. I liked the “premium” feeling of keeping each part protected under the foam without any contact. This made each small piece safe in a zip-up square bag that felt a tad too big from the spaced-out compartments. A micro fiber cloth is also included with a pouch for easy carrying in bags. There are also two single use wet wipes included, though you might want to save those for emergencies. Gunnar’s so-called locker does its job, while adding a few mesh compartments under the lid for any small possessions you might have to pack for bigger trips.

Gunnar has found a formula for comfort and style in the Lightning Bolt 360 glasses for gamers, even if modular parts can feel a bit tight for frequent changes.