“Let’s Get This Party Started, Babeey!” 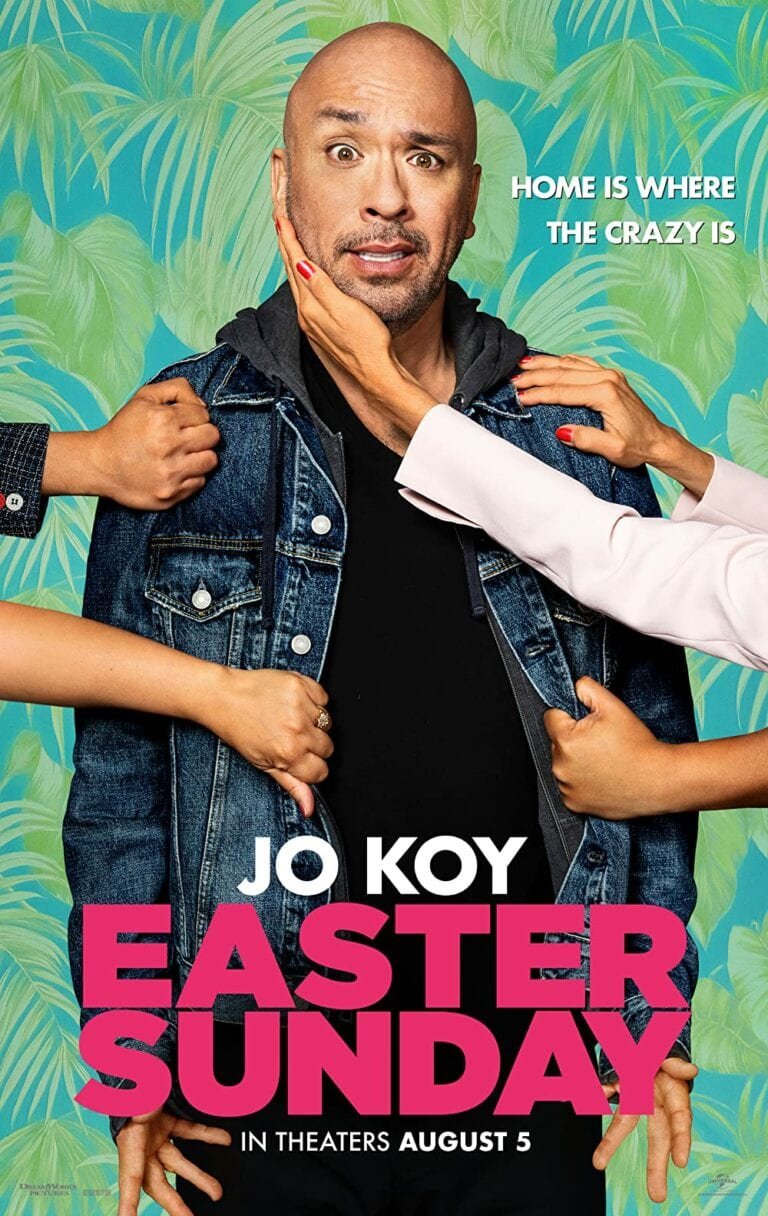 Growing up as a Filipino-Trinidadian Canadian was no joke in my life, and seeing how it played out on-screen, from the Filipino side of things, was a gem. A lot of the Filipino tropes and references in Easter Sunday hit very personal strings for me—especially with the family squabbling and bantering scenes.

After leaving the theatre, it left me with a smile other cultures and ethnic backgrounds may have felt coming out of John M. Chu’s Crazy Rich Asians or Marvel Studios’ and Ryan Coogler’s Black Panther. While Easter Sunday may not be as big a production as the aforementioned movie titles, it was still a delight to see a predominantly Filipinx cast on the big screen—telling a mostly relatable story to the cultural backdrop. It was truly a big ‘love letter’ to all Filipino peoples who have migrated to North America.

The story followed Joe Valencia (Jo Koy), a struggling actor, comedian, and single father, as he took his son, Junior, to attend a family Easter weekend get together with their loving, rowdy family. Of course, Joe had been so busy with his career in Los Angeles that he had not visited his mother, and his hometown in quite some time.

As one could guess, the core root of the story was central to what it meant to be home and taking the time to be around loved ones—despite the North American lifestyle of focusing on one’s own career above everything else. Essentially, it was a fairly typical realization of how ‘the home is where the heart is’.

“While Easter Sunday may not be as big a production as the aforementioned movie titles, it was still a delight to see a predominantly Filipinx cast on the big screen…”

Easter Sunday provided a great scope of what it meant to ‘be back for the holidays’ in a very Filipino-North American way. Some things that were cross-cultural were the great tropes of returning home after a long time such as how there would always be new and old family issues, there must be a big feast, and there must be some kind of big family occasion (i.e., a wedding or a milestone birthday).

Easter Sunday tried to break its mould from a typical family comedy movie by adding some wacky elements that sort of stuck. The McGuffin of the film sent Joe and some of his family members on a wild goose chase throughout the Easter weekend that made it feel like a Harold & Kumar film—no unrated nonsense though. The plot points appeared a little too convenient at times, especially with Junior’s somewhat cringy, romantic storyline.

Jo Koy’s charming, witty comedic quips and rants heavily carried Easter Sunday. He has been a comedic sensation for his stand-up acts in real life like Netflix’s Comin’ in Hot and Jo Koy: In His Elements. As a booming stand-up comedian, I was not sure how he would fare in his first acting role. But he nailed it, and somehow made a stand-up comedy routine in a church work in a cinematic work.

His character and how his comedic talents shone was like how Chris Rock shifted heavily to acting in Down to Earth. Tiffany Haddish’s (Night School, Bad Trip) character, Vanessa, was another comedic athlete who helped bring the big laughs with her smart, brilliantly funny moments whenever she was on-screen.

The heart of Easter Sunday was with Eugene Cordero’s (Star Trek: Lower Decks, Kong: Skull Island) performance as Joe’s cousin Eugene, which painted him as a gullible character who got swept up in unfortunate circumstances. Eugene and Joe’s mom (portrayed by Lydia Gaston) really tug on the heartstrings for me as they were two of the characters who annoyed Joe the most but were the two family members who really cared for him.

While the runtime was fairly short with 96 minutes, I thought Easter Sunday was tight enough for me to be reeled into some of the pandemonium and funny Filipino references and jokes. I thought the love story for Junior’s character was a little too forced and cheesy—literally one convenient incident tied him and the girl to grow closer together. I thought the film expressed the message it needed to do without doing anything too original or out of place.

Even if you are not of Filipino descent, I believe everyone could understand family troubles and family humour in any culture or language. The same could be said of the typical ‘starving artist’ archetype story that Joe went through—which paralleled Jo Koy’s real life experiences of breaking out into the comedy scene. All those elements together were what Easter Sunday was able to showcase briefly and intelligently. I can guarantee you will chuckle, if not, literally laugh out of your seats in some scenes.

Easter Sunday will educate and entertain everyone on the topic of a somewhat stereotypical family gathering in the Filipino-North American culture.
REVIEW SCORE
7.5
File Under: Easter Sunday, Jo Koy, Movie, Review