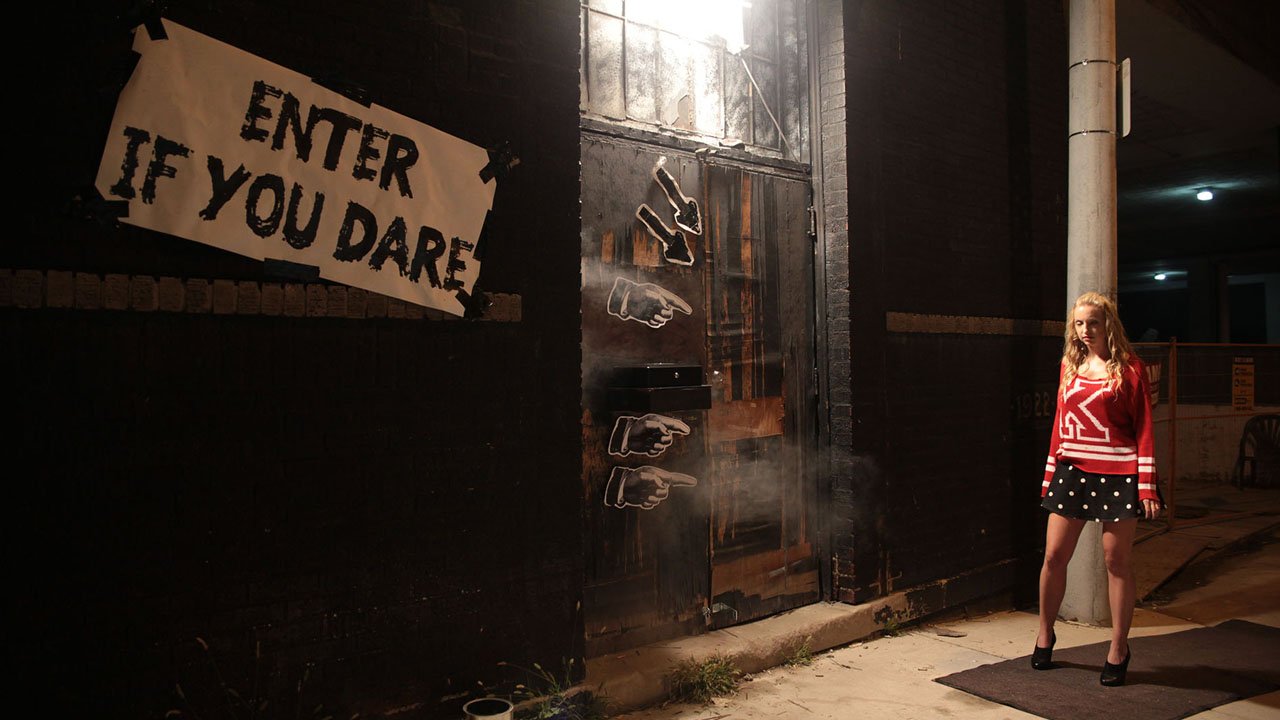 Not all horror movies have to reinvent the wheel to satisfy. Sure, it’s nice when something comes along that feels completely unlike anything you’ve ever seen before, but these flicks are few and far between. For the most part genre movies are generic and that’s just fine. We sign up for them because we like the comfort of the formulas and frankly, it’s hard to follow them well. A movie like The Scarehouse will feel pretty familiar for anyone who has seen the dozens of direct influences that clearly inspired the filmmakers. Yet, the filmmakers played to their crowd well and tossed in enough twists on tired formulas to deliver something immensely watchable. It’s a good time, nasty and fun. You won’t learn anything from the movie, but this Canadian cross between Mean Girls and Hostel is time well wasted.

The plot involves a pair of sorority girls (Sarah Booth and Kimberly-Sue Murray) who just got out of a two=year stint in prison for some sort of mysterious incident. Whatever happened, their entire sorority was involved in the crime, but the whole gang turned against the duo to stay out of the clink. Needless to say, our two anti-heroines didn’t take to kindly to that unnecessary punishment and have spent two years concocting a big ol’ revenge plot. This movie is that revenge plot (along with some handycam found footage flashbacks that reveal the crime that went down slowly over the course of the film). It takes place on Halloween. The gals have created an elaborate haunted house for the public along with a secret side entrance that each of the guilty gals arrive to one-by-one over the course of the night. Once they show up, Booth and Murray shuffle them into a back room in costume, reveal their identities and then slowly and painfully murder their former sorority sisters.

Like I said, it’s pretty standard horror stuff. The difference is in how well it’s executed. Director Gavin Michael Booth made his name in music videos long before delivering this flick, so he knows how to shoot a no budget movie to look like a million bucks. The scope framed digital cinematography is slick and stylish. The man knows his way around an effective suspense or gore sequence and delivers them nicely. He’s also got a stellar single location for his horror yarn, a neon Halloween haunted house that might be inexplicably elaborate for a pair of broke 20 something ex-cons to have designed on the fly, but it suits the horror movie nicely in terms of atmosphere and ambience. The script that he co-wrote with Booth is also rather clever. It might be the usual “pretty girls in danger” routine, but with the killers themselves being ladies there’s a mild, clever, n’ welcome feminist slant to the proceedings. The kills also feel gender specific and it’s quite amusing to see how the duo whip up gore-athons through the fractured fantasies of psychotic college gals.

And oh, what fun those gore scenes are. You’ll see a corset torture, live breast implant removal, and a number of other playfully disgusting sight as the pair of vindictive girlfriends launch into tirades with all sorts of gender-specific salty language. By the time a deadly pillow fight enters the film, you can’t help but laugh at the lunacy even if the make-up effects are gag-inducingly impressive. The Booths might be aiming to disturb, but they are well aware that their film is supposed to be good fun (see title for more), so there’s a sly wink and string of dark humor throughout to induce giggles along with the gasps. The film also benefits immensely from a pair of damn strong lead performances. Sarah Booth and Kimberly-Sue Murray are hardly blank faced eye candy. They genuinely commit to these roles, coming off as frighteningly cracked in one scene and knowingly hilarious in the next without ever losing the thread. The pair are genuine talents and hopefully The Scarehouse proves to be a launching ground of sorts for them and their director.

If you also watch endless streams of crappy no-budget horror films, The Scarehouse is the type of movie that justifies an undying commitment to genre trash. When executed with creativity by folks who genuinely love B-grade horror flicks rather than cynical careerists using the genre as a low budget resume project, there’s oh so much fun to be had. The folks behind The Scarehouse know exactly what they are doing and are clearly just as tired of half-baked horror garbage as their audience. They’ve made a very fun, clever, and nasty little genre romp well worth seeking out. It’s not a movie that will spark a new genre trend or one that elevates horror to high art. Yet, it is exactly the type of movie you’d hope to stumble upon while cruising through Netflix with pizza in one hand and the intoxicant of your choice in the other. Feel free to indulge in that experience.

The pair are genuine talents and hopefully The Scarehouse proves to be a launching ground of sorts for them and their director. 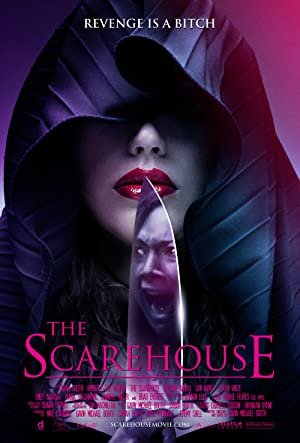