Reviews That Raved This Month! 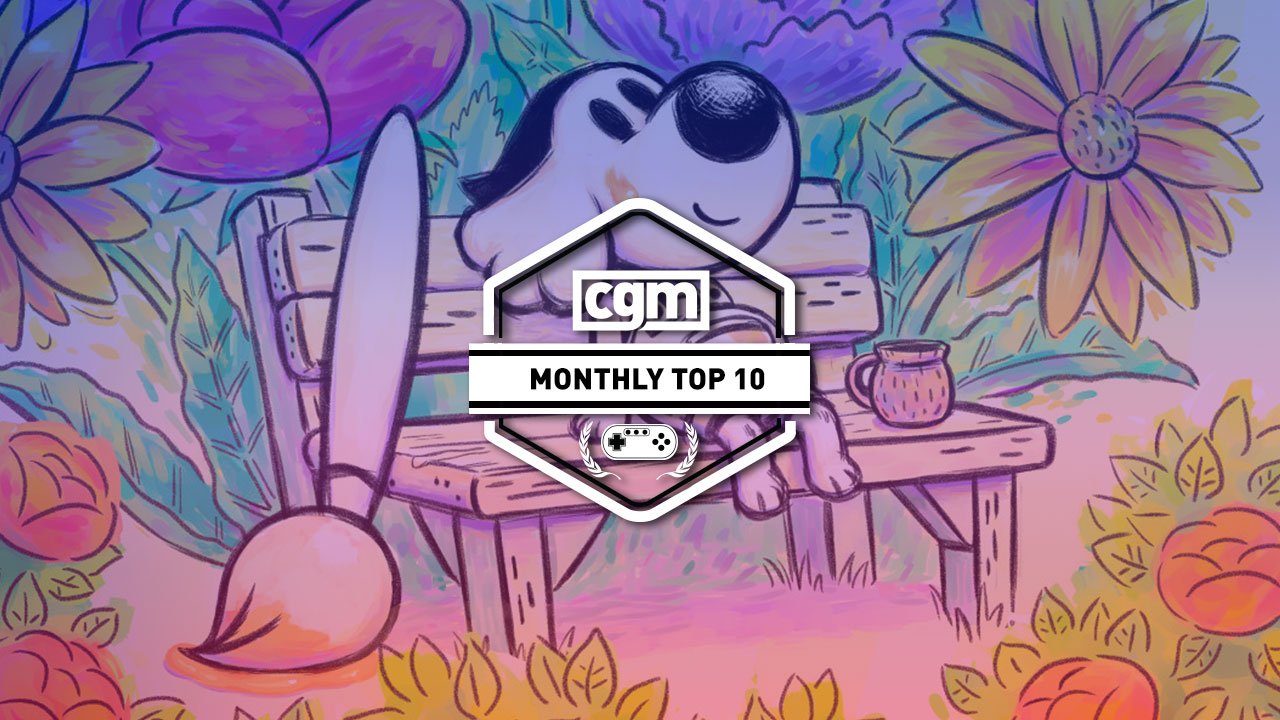 Each month, CGM writers get the chance to review the latest and greatest tech, toys, games and media. At the end of each month, we round up the ten highest scoring reviews to show our readers what gear and games we can stand behind with confidence! From our CGM family to yours, we want to ensure you never miss the top reviews to help you make informed choices on all your media and gear!

“Chicory: A Colorful Tale tells the story of the Magic Paintbrush—its every stroke fills the world with colour and is passed down through the generations by its Wielders, its current Wielder being the titular Chicory. Suddenly, all colour is sucked from the world, and Chicory loses the will to wield her brush. Players take on the role of a plucky dog-character who takes it upon themselves to become the next Wielder and embark on a whirlwind adventure to darkness and fill the world with colour once again. ” Here is CGMs review of Chicory: A Colorful Tale.

Final Thoughts: Chicory: A Colorful Tale is an absolute delight—fun, engrossing, and bursting with creativity!

“The simple looking powered speaker system has a retro flare throughout the design. They are deceptively complex in the sheer level of features resting under the hood. At first glance you would think they are a simple pair of stereo speakers, but you would be mistaken. With the power of Bluetooth, and HDMI ARC, The Fives can take the place of your desktop speakers, your phones sound device, or even your high end soundbar, and look and sound great in each role.” Here is CGMs review of Klipsch The Fives.

Final Thoughts: The classic styling and simple controls with The Fives mask a modern speaker that would make any audio or TV setup sound amazing.

“Right out of the box, Otterbox has made this as simple as possible. You don’t even need an instruction manual, it’s all sitting right there, step by step, in the packaging. You get two different mounting cages, one for Xbox Series X|S and one for Xbox One, two batteries, a charging dock and USB-C cable. I thought it would at least be a struggle to pop the mounting cage into the back of the controller where the AA batteries normally go, but it was simple, no harder than sliding the cover on. The batteries themselves are even easier, they literally just snap into place and that’s that.” Here is CGMs review of Otterbox Power Swap Controller Batteries.

Final Thoughts: After using the Otterbox Power Swap Controller Batteries, I don’t see myself using another power option any time in the future. I hope Otterbox considers branching out to other systems, because every gamer would love these as an option.

The Kids Large line of glasses cost $29.99 and come in onyx, navy tortoise and crystal, with your choice of clear or amber tint and the option to have them made according to your prescription. The Rush Teens swap our navy for a more amber tortoise and come in at $39.99,  and the Rush Kids Small are $29.99 in onyx, teal or magenta.” Here is CGMs review of the GUNNAR Kids Rush Large glasses.

Final Thoughts: GUNNAR always knows how to keep our eyes safe while looking stylish. With a second style for kids, it’s nice to see a company putting real effort into their safety while giving them some choice.

“The Google Pixel Buds – A Series come with the features you want from a premium product, setting them apart and justifying the price jump from buds made by companies not linked to mobile devices. They have the bells and whistles of higher quality buds including connecting automatically when you remove them from the case, sensing when they’re your ears, and adjusting to a single earbud when one is removed.” Here is CGMs review of the Google Pixel Buds – A Series.

Final Thoughts: If the upgrade from third party buds is within your budget, these boast all the functionality of premium earbuds at a middle-of-the-pack price point. The Google integration will make these especially appealing for Android users, but they’re a great option to connect to any device.

“For those who may be unaware, Instax Mini Link printers are portable printers—coming in at 3.5”X1.3”X4.9”—that are made to link with your smartphone in order to print photos. The units are lightweight—weighing in at 7.3oz—and easy to use, thanks to its proprietary Instax Mini Link app. However, what separates the “Nintendo Edition” of the Instax Mini Link from its predecessors is primarily a cute, silicone Pikachu slipcover for the device; and a new app which somewhat streamlines the process of bringing photos from the Nintendo Switch to your smart device.” Here is CGMs review of the Instax Mini Link Printer.

Final Thoughts: The Special Edition Instax Mini Link Printer is a neat little addition to any gamer or photophile’s collection.

“The documentary series takes you on a behind the scenes tour of Disney Parks, each episode focusing on one specific attraction. You get the chance to learn the entire history  of Star Tours, It’s a Small World, The Twilight Zone Tower of Terror, Space Mountain and more of your favourite things to see and do, no matter which park you are visiting in the world.” Here is CGMs review of Behind the Attraction.

Final Thoughts: Watching Behind the Attraction, fans of Disney and particularly the Disney Parks will love this behind the scenes journey through the happiest places on earth, giving you a unique view of the imagination that went behind a place built to inflame your imagination.

“The new controller not only feels fantastic, is more comfortable and feels like a leap forward for gaming, it also just looks fantastic. The white and black style on the launch DualSense has a new but iconic style that is immediately recognizable. But, if you are like me, you missed the splash of colour that could be found on the PS4. From red, to black, to plenty of custom offerings, the PS4 has no shortage of options should you want to make the console uniquely yours.” Here is CGMs review of the DualSense Controller Colour.

Final Thoughts: Sony has refined the PlayStation experience, and the new DualSense Controllers make all that much more colourful.

“If you ever had the pleasure of enjoying the Razer Opus, you will have a basic idea of what these new headphones offer. The Razer Barracuda X delivers a sleek, minimalistic design that is built to be worn all day. While I have a sense of nostalgia for the Kraken, I do like a headset that feels comfortable when I am gaming for hours on end, and it seems Razer has nailed that balance.” Here is CGMs review of the Razer Barracuda X.

Final Thought: The Barracuda X Wireless headphones are the latest headphones that prove Razer is becoming a force to be reckoned with on and off the digital battlefield.

“At first glance, the new Prime+ could be mistaken for a standard office mouse, with SteelSeries delivering a subtle and understated design. But the mouse does hold some secrets, with programmable customization, a sneaky OLED screen on the bottom of the device, and an extremely fast sensor making this one of the more exciting offerings despite it’s simple look.” Here is CGMs review of the SteelSeries Prime+ mouse.

Final Thoughts: Simple design and a perfect balance between performance and price makes the SteelSeries Prime+ one of the best eSports mice you can currently buy.

“The JBL Endurance Peak II are right in the middle of the line for JBLs true wireless selection of headphones and come in 4 different colours: blue, black, white, and red. A younger me would have adored the red version, but white appealed to me more now. They are the least expensive sets that are considered IPX7 sweatproof and waterproof.” Here is CGMs review of the JBL Endurance Peak II headphones.

Final Thoughts: The Endurance Peak II are well worth your consideration if you are looking for a good set of truly wireless headphones but don’t want to break the bank. The fantastic audio quality is the highlight for me and everything else is simply a great addition.

“Samsung’s latest premium tablet is a true thing of beauty. At only 5mm thick and weighing 590g, this is a slick design which loses nothing on toughness as it has one of the most solid builds of any tablet I have ever held. Add to that the most powerful processor in an Android Tablet, the Qualcomm Snapdragon 865 and 8GB of RAM (6GB in the 128GB model) should have you buzzing through any task that you can throw at the device.” Here is CGMs review of the Samsung Galaxy Tab S7+.

Final Thoughts: The Samsung Galaxy S7+ is a premium price, but it delivers premium performance for the gamer, binge watcher and productive worker in all of us. Its build quality, power, battery life and beautiful display will leave nobody with buyer’s remorse.

“Look, this is a Switch port. That means Tony Hawk’s Pro Skater 1 +2 isn’t going to look as pretty or run at as high a frame rate. Instead of 4K and 60 FPS, the Switch version brings a solid 30FPS and doesn’t look like it’s being powered by a potato like the PSone original. On beefier consoles, this remaster collection looks amazingly realistic, while the Nintendo port maintains the nigh-cartoonish character that the original games had. And honestly? I’m okay with that.” Here is CGMs review of Tony Hawk’s Pro Skater 1 + 2 for Nintendo Switch.

“At first glance, the Rival 5 is a simple, unassuming gaming mouse. It has a sleek, ergonomic design accented by four RGB zones—the logo and scroll wheel, plus two boomerang-shaped lines running down either side. It’s a tasteful aesthetic that might not look out of place in a normal office if you subdue the lighting through the SteelSeries GG software.” Here is CGMs review of the SteelSeries Rival 5.

Final Thoughts: The Rival 5 is a terrific mouse for its price range, offering an optimized and lightweight design, and just the right amount of buttons in the right places.

And our Monthly Dishonourable Mention:

“It would’ve been great to fill its runtime with characters you actually care about (just like the first film) and a constantly engaging storyline that wants to challenge its viewers, not only physically, through its amazingly cathartic and gory kills, but mentally as well, by subverting classic horror tropes while paying tribute to them at the same time. However, almost none of it feels particularly interesting, nor important.” Here is CGMs review of Fear Street Part Two: 1978.

Final Thoughts: Instead of building upon what the first film brilliantly established, Fear Street Part Two: 1978 is a useless and flaccid detour that quickly becomes stale once it starts “going back in time.”